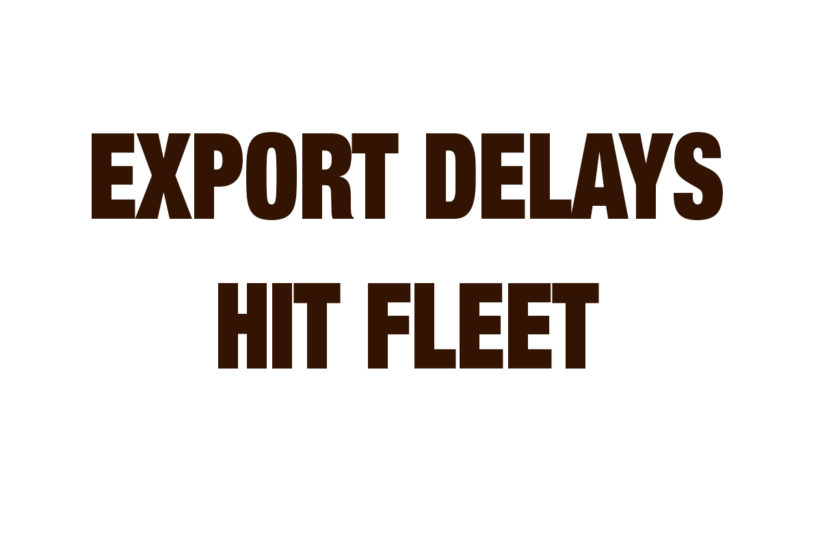 Fish and seafood exports from throughout the UK are facing long delays and huge amounts of paperwork in Calais and Boulogne and in the Netherlands, reports Tim Oliver.

Merchants and processors are reluctant to buy fish and shellfish for export markets because of the risk of delays and big financial losses, causing a fall in fish prices.

Prices have fallen sharply, especially for export species such as monkfish, megrim, hake and live shellfish. Seafood Scotland said that prices of many species had fallen by around 40-50%, and in some cases by up to 80%. It said that around one-third of the Scottish fleet is tied up, and some boats that are still fishing are landing in Denmark, where catches can more easily progress to European markets.

A lot of skippers in Scotland are taking a ‘wait and see’ approach to resuming fishing in 2021, with uncertainties over demand and how much quota they will have following the Brexit deal.

Mike Park, chief executive of the Scottish White Fish Producers’ Association, said that skippers realise they are going to have less quota this year for some species, and also do not want to be landing when prices are depressed.

“They don’t know when things will get better or worse over the next few days,” he told Fishing News.

“There’s a real and imminent problem with the scallop fleet, who are operating with a fresh product, and they are starting to tie up.

“A lot of the scallop vessels are tied to companies – some own six or seven, or up to 10 vessels – and if you can’t sell it from the warehouse in terms of the fresh fleet, there’s no sense in the vessels putting to sea.”

He said the demand from the Continent has reduced, because of the lockdown and the uncertainty about processors being able to get their product to the Continent.

“Uncertainty in business is the devil, and scallop and other processors are saying ‘we can’t afford to lose that cash’.

“One merchant had a load of fresh monk tails still stuck in the UK after four days, and the customer cancelled the order.

“It’s almost a perfect storm for the industry, with Covid, uncertainty, export delays, and for the whitefish fleet, less opportunity this year.

“Some boats are still going to sea, but it’s the same situation we had last year – if you want to maintain a price in the market, the levels of supply have got to meet the demand. Demand is still there for domestic species, but there is just not the demand for the overseas species.”

Mike Park said that a particularly acute problem with exports was ‘groupage’ of products from different merchants on fish lorries.

“Ordinarily, lorries would go through Aberdeen, and they would take product off one lorry and put it on another, so you would have a number of merchants’ fish on one lorry, with a number of different species. But now every piece of that cargo has got to be inspected – that’s a big problem,” he said.

He said he believed the problem would be sorted out, but it will mean extended delivery times for seafood – anywhere from 12 to 24 or even 36 hours. “Once the times become certain you can accommodate that, but what you can’t accommodate is that uncertainty.

“People were hoping to start recovering from the Covid situation by now, but things are so bad now that we need to go to the government and ask for financial help again.”

South of the border, the NFFO said there was ‘an emerging crisis’ at Calais and Boulogne. The first consignments of the year from Cornwall hit ‘a brick wall of bureaucracy’, and similar problems were being faced in relation to prawns exported from North Shields and with direct landings into Holland.

DEFRA has formed a new stakeholder group to address the crisis. The group, including fish exporters and representative bodies from the fishing sector, held its first meeting on 12 January.

It will meet twice weekly, and feed conclusions up to the top of government.

NFFO chief executive Barrie Deas said that the problems with the new system are being felt most acutely in the fresh fish and live shellfish export sector.

“There is a bitter irony for the fishing industry that its hopes for a new future as an independent coastal state was sacrificed by the government for unimpeded access to the European market – only to find that access to that market is anything but frictionless,” he said.

“This mounting crisis in the export of fish and shellfish highlights the anomaly through which the UK has unilaterally provided a six-month period of grace for imports to the UK. Whilst EU products face frictionless trade, our exports hit a range of non-tariff barriers which have paralysed our export trade. There is an obvious case for parity as the various border issues are sorted out.

“If this is indeed the new norm, it is clearly the case that many businesses in the supply chain will fail and jobs will be lost.”

The prime minister promised compensation to the industry on two occasions last week, but it was not clear whether the £100m he mentioned was new money, or more money on top of the £100m that has already been announced (Fishing News, 14 January, ‘£100m support package’).

He told SNP MP Ian Blackford in the Commons last week: “We are putting £100m into supporting the fishing industry in Scotland and the whole of the UK.”

And he told the Commons Liaison Committee: “I understand very much the frustrations of the fishing community and fishermen and women who are facing what I believe are temporary frustrations.

“Insofar as there are delays caused by a variety of problems, we will compensate those fishing businesses.”

Jimmy Buchan, chief executive of the Scottish Seafood Association, said: “We welcome Boris Johnson’s unequivocal promise of compensation for fisheries businesses affected by the nightmarish bureaucratic hurdles that have been erected since 1 January.

“This is just what we have been calling for in numerous meetings with government officials over the past few days. We now look forward to engaging with the government on the detail of the package on offer, and working with both the UK and Scottish governments to clear the path for exports to resume as normal.”

Seafood Scotland said ‘a perfect storm’ had hit the industry, and called for a six-month grace period to allow the new systems to bed in.

“No one party can fix this issue overnight, but losses for the sector are mounting, and the situation is urgent. We have days to fix it – not weeks,” said the group.

One Scottish seafood company that normally sends £1m-worth of product to the EU every week managed to get only £12,000 of product into the EU last week, and has told the 27 boats that supply it to stop fishing.

A Scottish whitefish processor that exported 100t of seafood in the first two weeks of January in 2020 managed to export just 8.5t in the first week of this year, and none last week. His freezer is full, and he has stopped buying.

Seafood Scotland is again calling for the UK and EU to grant companies a six-month grace period to allow systems to be fixed and companies to get used to the raft of new paperwork they have to complete.

Chief executive Donna Fordyce said: “The sector is at rock bottom and needs space to breathe. Trying to navigate the system we have at the moment is like pushing water uphill, and it is not improving.

“Everyone has their sleeves rolled up desperately trying to help companies meet the requirements for export, but at the heart of it, the UK system needs fixed. This cannot be done while it is live. This was inevitable, given that such a complicated process was put together at the last minute. With some breathing space, the system can be fixed and rebooted, and companies will then be able to keep moving.”

In a letter to DEFRA secretary of state George Eustice, Fergus Ewing said the Brexit trade deal was having ‘a catastrophic impact’ on Scotland’s food and drink export industry.

He said the situation had ‘slowly progressed from bad to worse’.

“We have been advised that some Scottish fishing vessels have landed fish in Denmark to avoid the Brexit bureaucracy and red tape. We learn of some business having been lost to other suppliers. That some fishermen have decided to suspend their fishing for fear they cannot sell their fish.

“Market prices have fallen by 50% or more in some cases.”

He said the UK government had refused the industry request for a six-month grace period in which these ‘untried systems could have been worked out and problems solved without commercial loss’.

“It is incompetence in the extreme to fail to follow such an approach when the systems and paperwork are so complex.

“Ultimately it is the UK government’s choices which have resulted in these impacts. Scottish stakeholders called for the UK government to commit to bringing forward a package of financial compensation for producers, processors, manufacturers and distributors who encounter losses as a direct result of border or market disruption.”

He told George Eustice: “I am writing to demand that you set out urgently how Scotland’s exporters will be compensated for their losses, both in the short term and the long term caused by reputational damage.”

A UK government spokesperson said: “We are working closely with the industry to help understand and address the issues they are experiencing.”