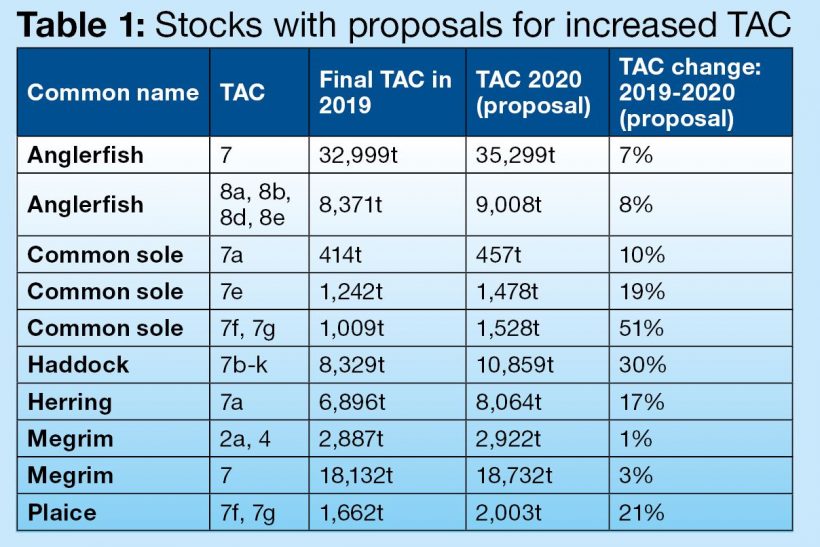 With most of the European Commission’s proposals for the 2020 TACs now announced, there are cuts in the TACs of several major stocks.

Reductions are advised for most key Scottish whitefish stocks including haddock, whiting, saithe and hake, and on the west coast, zero catch advice remains in place for cod and whiting.

Other major cuts proposed include a massive -88% for Celtic Sea cod and -68% for Irish Sea cod.

But there are also some significant increases, including 30% for Celtic Sea haddock.

Speaking at the annual dinner of the Scottish Fishermen’s Federation last week, Fergus Ewing said that he hoped that ‘some positive advice revisions may still arrive over the horizon’.

He warned that a cut of 70% being proposed for North Sea cod would present ‘an immediate and severe choke risk under the landing obligation’.

Officials were working ‘intensively’ with the industry, NGOs, the UK government, other member states and the Commission ‘to establish the necessary multi-national response to this very difficult advice’.

He said: “What I cannot accept is a refusal by the EU to take account of the socio-economic impacts that a cut of this scale would create, in both the offshore and onshore sectors. The multi-annual plan is very clear on this – their claim that they are legally obliged is simply not correct.”

There were ‘a few silver linings’, however, including the 41% increase in the mackerel TAC that had now been approved, positive advice for ling, and a rollover for Rockall haddock.

NFFO chief executive Barrie Deas echoed the Scottish minister’s warning, saying that the advice was ‘very challenging’ for all cod stocks – North, Celtic and Irish seas and West of Scotland – and had the potential to create chokes in the mixed fisheries.

“The Commission feels it is legally required to follow an MSY approach, but if you look at the basic CFP regulation and the multi-annual plans, they have provisions to deal with difficulties in setting quotas in mixed fisheries – and in the North Sea there is also the Norwegian perspective.

“For example, in the Celtic Sea a package approach is being discussed to try to prevent an extreme TAC reduction that would create distress for the industry, fishing communities, the enforcement authorities, the whole system. There’s an awful lot to play for.”

He added that with the delay in Brexit until possibly 31 January, the UK would be able to play a full part in the December Fisheries Council on 16-17 December, as the UK would still be in the EU.

Table 2: Stocks with no changes in TAC

Overall, for major species of importance to UK and Irish fishermen for which proposals have so far been put forward, increased TACs are proposed for 10 stocks, and decreases for 23 stocks. Ten stocks remain unchanged.

In the North Sea, as well as the advised -70% cod cut, which will be discussed at the EU/Norway negotiations on shared stocks that begin on 18 November in London, a -21% cut is proposed for hake and -28% for turbot and brill.

In the case of major pelagic species, 17% increases are proposed for Irish Sea and west coast of Scotland herring. Channel sprat (7d, e) is planned to be cut by -43%.

The proposal covers stocks managed by the EU alone. International negotiations are still in progress for stocks managed in co-operation with third countries, such as Norway, and some stocks are awaiting further scientific advice.

“Multi-annual plans for the North Sea and for western waters provide the framework to adapt management measures in complex mixed fisheries, as well as to avoid extreme variations of TACs,” said the Commission.

The proposed -21% cuts in northern and southern hake are examples of decreases being limited using the upper part of the MSY range, in line with the western waters multi-annual plan. “The stocks have a healthy biomass, therefore a limited reduction of the fishing pressure would suffice to keep the stocks in good shape, according to scientists,” said the Commission.

Again, scientific advice would allow the TAC for Celtic Sea haddock to increase by 100%, but the Commission is proposing a 30% increase, using the lower part of the MSY range to protect vulnerable Celtic Sea cod caught with haddock in the mixed fishery of the region.

The Commission has also proposed measures to ensure that Celtic Sea cod and whiting recover to safe levels. They include increased selectivity, closures, and controls to prevent illegal discards.

It also proposes to continue the quota exchange system established at the 2018 December Council for by-catches, to prevent whole fisheries being closed when there is a zero catch for just one species.

“This system ensures that member states with no quota for one of these by-catch stocks can continue fishing for other target stocks. The exact amounts for the by-catch TACs and their accompanying measures will be issued at a later stage, after ICES provides its scientific advice,” said the Commission.

The proposed TACs are based at MSY levels for stocks with a full scientific assessment, and at ‘precautionary levels’ for other stocks. In 2019, 59 stocks are being fished at MSY levels, up from 53 in 2018 and compared to only five in 2009.

Final decisions on the 2020 TACs will be made at the Fisheries Council on 16-17 December in Brussels. 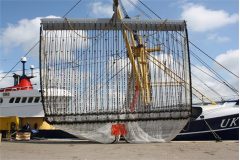 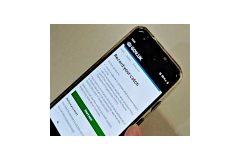