The government has launched its landmark fisheries bill, which sets out the legal basis of the post-Brexit fisheries management regime, reports Tim Oliver.

Industry leaders gave a cautious welcome to the document, but pointed out that there will be a lot of detail to be worked out in the months ahead.

One element of the bill that will be controversial is provision for fishing opportunities, both quotas and effort, to be auctioned annually by a competitive tender or auction system – an idea that was floated in the fisheries white paper.

Another provision likely to need a lot of discussion is regulations to establish a charging scheme in respect of over-quota or illegal catches.

The bill, which was introduced into parliament last Thursday (25 October), will create the powers the UK needs to operate as an independent coastal state after leaving the EU.

It will enable the UK to control who may fish in UK waters, and on what terms, for the first time since 1973. It gives the UK the power to implement new deals with the EU and other coastal states.

DEFRA said the bill is ‘a major milestone’ in delivering the government’s promise to take back control of UK waters. It creates the powers to build ‘a sustainable and profitable fishing industry, in the best interests of the whole UK and future generations’.

It also delivers a ‘green’ Brexit by extending powers to protect and enhance the marine environment.

The Scottish, Welsh and Northern Ireland devolved administrations will also get ‘more decision-making powers than ever before’, said DEFRA.

Environment secretary Michael Gove said: “This new fisheries bill will allow us to create a sustainable, profitable fishing industry for all of the UK. It will regenerate coastal communities, take back control of our waters and, through better conservation measures, allow our precious marine environment to thrive.

“The CFP has damaged the UK’s fishing industry and our precious fish stocks. The bill will deliver a sustainable fishing industry, with healthy seas and a fair deal for UK fishermen.”

It will give powers to ensure that the UK can set its own quotas and days at sea, consulting with the devolved administrations.

It also extends powers to the MMO and the devolved administrations to protect UK seas and the marine environment.

The new legislation also proposes ways in which the UK government and the devolved administrations will work together on fisheries management.

This will include preserving UK vessels’ right to fish across the four zones of UK waters, and creating a consistent approach to managing access by foreign vessels. The four fisheries administrations will set out in a joint statement how they will work together to achieve the bill’s sustainability objectives.

Scottish fisheries secretary Fergus Ewing welcomed the recognition of the need for devolved powers in the bill, but expressed reservations about several aspects.

He said Scottish officials will assess the bill’s provisions and assess whether these are the best means of protecting and delivering Scotland’s interests.

But the minister expressed concern about ‘ongoing lack of clarity on a host of key issues’ of critical concern to seafood industries, both onshore and offshore.

These include the status of EU nationals after Brexit, the potentially significant non-tariff barriers exporters may face after Brexit, and replacements for vital EU funding streams such as EMFF.

“The UK government needs to provide clarity on these critical concerns as a matter of urgency,” said Fergus Ewing.

“While it is right that we seek opportunities to promote the sustainable growth of the Scottish fishing industry, promises of huge, unilateral quota increases and wildly unrealistic free trade arrangements are simply not credible, and we must also ensure that benefits for some sectors do not come at the expense of others.”

Industry leaders broadly welcomed the bill, but there were qualifications with regard to the details.

SFF chief executive Bertie Armstrong said: “This is a necessary piece of legislation that sets a completely new framework for fisheries management outside the universally detested CFP.

“Control of UK waters will no longer be exercised by the dead hand of EU bureaucracy, but by our governments at Westminster and Holyrood, which we trust will work together in harmony to seize the sea of opportunity that stretches out before us.

“The Scottish government’s own figures suggest that this could be worth an additional £540m per year to the seafood industry, plus a total of 5,000 new jobs.

“And it is accessible through an effective and reactive fisheries management regime that avoids placing unnecessary constraints on skippers and crew doing a difficult job at sea.”

The NFFO said the bill is ‘an important staging post on the way to the UK’s new status as an independent coastal state’.

“It will be important to manage our fisheries on a sustainable basis in this new future, and this bill provides the powers to control who fishes in UK waters, and also to set safe limits for overall fishing levels,” said the federation.

“It provides for legal continuity after leaving the CFP, and the means to build a new fit-for-purpose UK fisheries policy.”

NFFO chief executive Barrie Deas said: “Fishermen in the UK have waited for 40 years to address the imbalances within the CFP. These have worked systematically to the UK’s disadvantage, and this bill is an important part of that rebalancing process.

“Under the UN law of the sea, we will be able to apply our own fisheries policies in our waters, and negotiate fisheries agreements as an independent party, in the way that countries like Norway already do.”

Barrie Deas said the bill will provide the basis for an adaptive and responsive fisheries policy, capable of dealing with a dynamic industry and resource, and evolving scientific advice – a stark contrast with the cumbersome CFP decision-making process that is so difficult to work with.

“Parts of the bill introduce new measures, and will require scrutiny and discussion. Getting the balance right between an overall UK framework for fisheries, and the authority delegated to the devolved administrations, will be important, and there is much still to be discussed in this area.

“Overall, however, we consider that this bill is an important and welcome gateway to a better future for the UK fishing industry.”

SWFPO: ‘Devil in the detail’

Jim Portus, chief executive of the South Western FPO, said the industry welcomes the fisheries bill. “It heralds a new dawn for British fishermen, but – as with all legislation – the devil is in the detail,” he said.

Welcoming escape from the CFP and its ‘equal access to a common resource without discrimination’ principle, he said that it was never justified that British fishermen had a risible share of the EU quotas.

But he said: “Some have noted with irony that we are prepared now to entrust the reversal of the CFP into the hands of the same parliament and government department that delivered the death blows over the decades to Lowestoft, Fleetwood, Grimsby and many more ports.

“We had a choice: either to stay in the CFP and guarantee the destruction of more boats and communities as we drifted helplessly towards that ‘equal access’ goal, or to cast off the tow-rope that binds us to the EU machinery and make our own way to better prospects.

“Yes, there is a chance that the EU exit deal may scupper the lifeboat to which we are now clinging.

“Yes, there is a risk that the implementation period will be lengthened and momentum lost.

“Yes, the prime minister has a slim majority that may yet be tested to destruction by opponents.

“Yes, the fisheries bill may be amended unhelpfully.

“But, on the whole, I’m very pleased we have got this far in the process, and I’m looking forward to the weeks and months ahead, attending meetings with colleagues and officials where the details will be polished.” 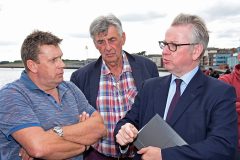