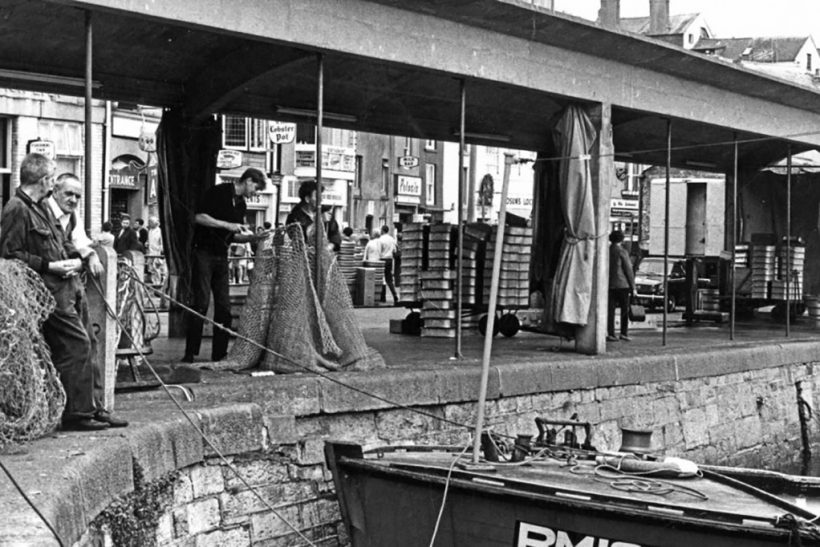 Martin Johns looks back on former fishmarkets at Brixham.

Situated on the South Devon coast, in close proximity to Berry Head, Brixham has long been a key fishmarket of both local and national importance. Today, as one of the main markets in the UK, fish sales are held each morning in modern purpose-built facilities, which bear little resemblance to those on which local auctioneers, buyers and fishermen previously relied for generations.

1: (Above) A photograph taken in 1970 of a busy market scene at Brixham’s old fish market alongside the port’s inner harbour. The old market was by then nearing the end of its days, and was replaced by the current fish market in 1971, which was far more suited to the port’s expanding fleet. This included a large number of bottom trawlers, many of which originated in Belgium, and a growing number of former Dutch beam trawlers which had proved to be very adept at catching high value Dover sole. Probably taken after the day’s fish auction had been completed, the photograph shows fishermen repairing their trawl, and stacks of the old pressed aluminium fish boxes loaded onto a trolley ready to be returned to larger trawlers berthed at New Pier, which was then the outermost pier in the harbour. Boxes full of fish can just be seen on the far side of the market beside the road, awaiting collection by the buyer’s lorries. The boat in the foreground is the 36ft long Paignton-based crabber, Our Annie Jones BM 136, which was built by Dixons of Exmouth in 1961. The boat remained part of the Devon shellfish fleet for many years and is still in operation today as Sou’ West Lady SE 21, a whelk potter operating from Whitstable in Kent. Forty-five years after this photo was taken the old fish market building is still a focal feature of the town, but is now regularly used for fund raising by local charities or regular arts and crafts events. 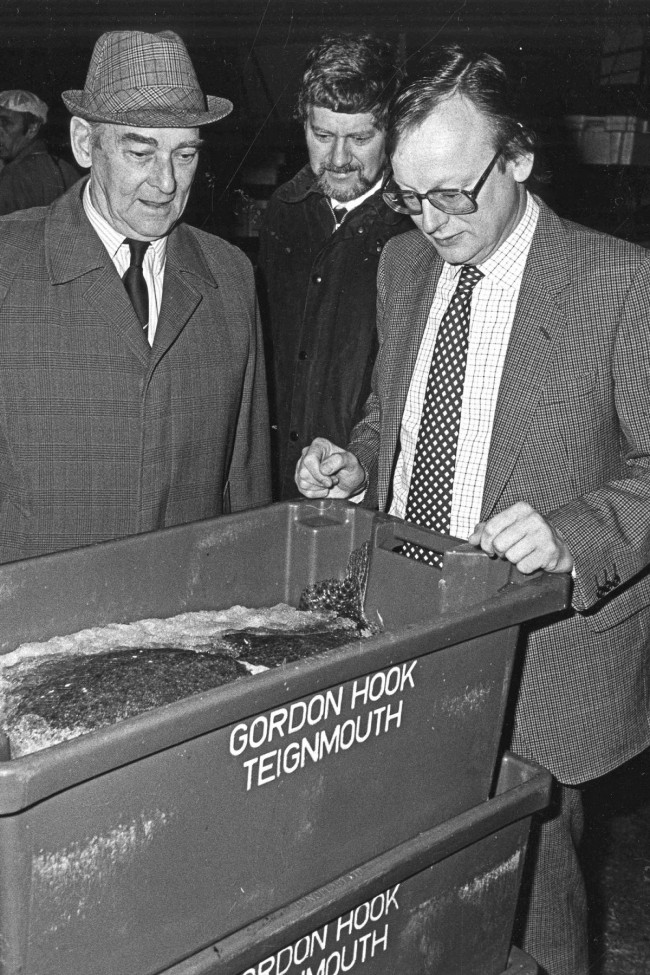 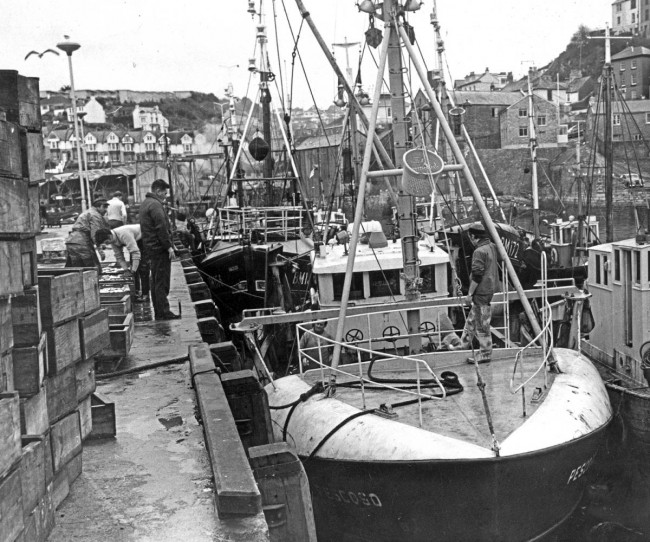 3: A view of a cluttered New Pier, with some of Brixham’s bigger trawlers landing at half-tide in 1970. The boat landing in the foreground is John Day’s 53ft long Pescoso BM 7, built by Philip and Son at nearby Dartmouth in 1969. Skipper Day was a pioneer of pelagic trawling in the south west. Such was the huge success of Pescoso, catching sprats and mackerel, that many other Brixham boats were spurred on to convert to mid-water trawling. Pescoso herself was replaced a year later with the bigger Scottish-built 73ft long Sputnik-class trawler, Crannoch BF 197 which was also converted to mid-water trawling and named Pescoso II. The fish being landed, probably sprats, can be seen being packed into wooden chests, possibly for the export market. Whitefish destined for sale on the market was boxed and loaded onto carts, which were pulled by hand around the inner harbour to the old fish market. If the tide was high the bigger boats were able to moor next to the market to land directly. The boat tied up outside Pescoso is the locally-built inshore trawler, Spartacus BM 145, while in the tier behind are Angelus BM 156 and Roger BM 172, both 50ft-class Belgian-built boats. The slipways of Uphams, the well-known Brixham boatyard, can be seen in the background. This boatyard is now long gone and has been replaced by waterside properties and a marina. 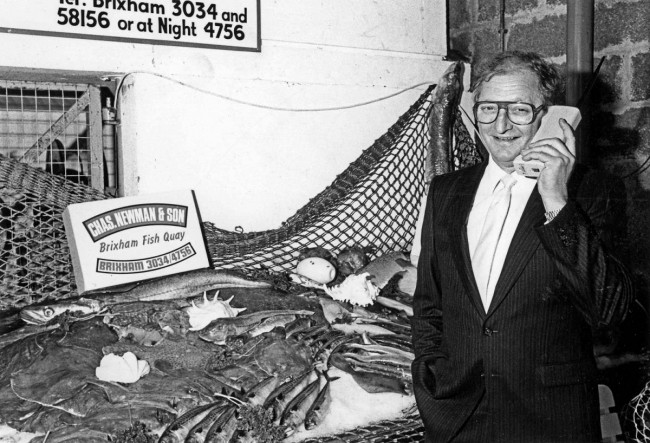 4: Brixham fish merchant Chas Newman proudly showing off his fish on a stand at a Brixham Trawler Race day, while posing with a then ‘state of the art’ mobile phone in the 1980s. Mobile phones were then in their infancy but quickly proved to be essential in maintaining contact between the merchants’ offices and buyers on the fish-market, to relay the requirements of local customers and those of the rapidly developing export business. Brixham landings were then dominated by big catches of Dover sole by the local beamer fleet, which was at its peak. However quotas were soon to be cut and the fleet also declined in numbers. (Photograph courtesy of Phil Lockley). 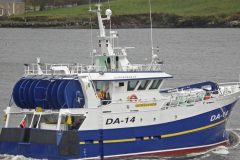