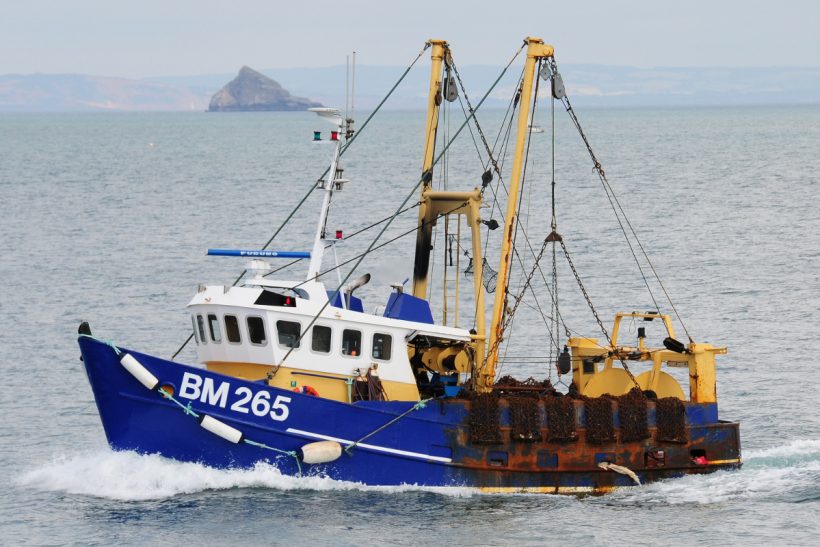 Four Devon scallop fishermen were fully acquitted in Gloucester Crown Court last week of 48 charges laid against them by Devon and Severn Inshore Fisheries Conservation Authority (DSIFCA), in a prolonged legal case in which the prosecution’s evidence was solely based on Vessel Monitoring System (VMS) data, reports David Linkie

The ruling is seen as an important benchmark for future allegations of fishing in prohibited areas involving computer-generated VMS evidence, without any substantial corroborating evidence.

In September 2016, 48 charges were laid against the owners of the scallop boats Joanna C BM 265, owned and operated by Laura D Fishing Ltd, and Golden Promise FH 401, owned and operated by South West Trawlers Ltd. Derek Meredith was managing director of both companies. The skippers at the time of the alleged offences were David Bickerstaff (Joanna C) and Derek Meredith (Golden Promise).

There were, initially, 48 counts laid against the four defendants – two individuals and two companies. The allegations were fundamentally that the vessels, at the time of the alleged offending, were scalloping and/or fishing within prohibited areas inside the 6nm offshore limit, over which the DSIFCA has jurisdiction. The offences related to alleged voyages between 6-18 January, 2016 and 17-18 February, 2016.

In particular, it was alleged that both vessels, at different times, were either using mobile fishing gear, contrary to the relevant DSIFCA Mobile Fishing Permit Byelaw, or operating in areas that were prohibited under the South Devon Trawling and Crabbing Chart provisions. Both alleged offences under these regulatory provisions were contrary to the Seafish (Conservation) Act 1967 and/or the Marine and Coastal Access Act 2009, Section 163. In some of the areas, scalloping/fishing was not permitted at all; in other areas, it was only permitted between certain set times, ie 7am to 7pm on each relevant day. 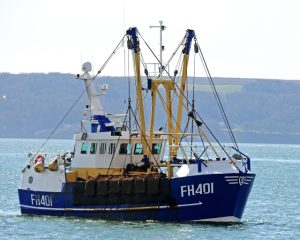 It was not denied that both vessels were in the prohibited areas at the times alleged, but at all such times, the fishing gear was inboard and securely stowed. The vessels were therefore dodging and not fishing. The prosecution, however, set out to prove these allegations by examination of evidence in the form of the onboard VMS, which is fitted to all commercial fishing boats over 12m in length, and provides evidence of a vessel’s position, course, speed and direction. Catches by the vessels in the periods under scrutiny were smaller than at other times when no breaches of regulations were alleged.

From the many detailed charts produced, account was taken of prevailing sea and weather conditions. According to DSIFCA, it was possible to compare these factors during known periods of fishing, as against alleged periods of fishing on the 48 indictments.

DSIFCA therefore sought to prove that, as a result of the VMS system’s 10-minute readings, a complete record of the vessels’ movements could be made out during any particular fishing trip. DSIFCA did accept that the position and speed report were ‘spot’ readings at the time of recording – as opposed to an average speed over the previous 10-minute period.

The only supporting evidence produced by DSIFCA was that both vessels carried a second navigation system, Automatic Identification System (AIS) – even though it was not compulsory for the vessels to transmit such data, which simply reports a vessel’s position and navigation details. DSIFCA claimed that on occasions when alleged illegal fishing was taking place, the AIS data was not transmitted. It was therefore submitted that this was a further attempt to conceal illegal fishing.

DSIFCA produced large quantities of supporting documentation with alleged evidence to support the counts being laid. In particular, there were no less than 10 statements (with supporting exhibits, etc) laid by chief prosecuting officer Matthew Mander, as well as a further 13 statements by individuals whose evidence was submitted in support.

Some of the evidence related to the preservation, conservation and protection of fishing resources, and emphasised the environmental impact of illegal fishing; other documents referred to the presence of reefs and/or rock structures protruding from the seabed which, it was submitted, were damaged by alleged illegal fishing. Other, very extensive, evidence related to weather conditions, e-logs and sales notes, and – towards the end of the case – animated charts were produced. There was also very substantial computer printout information, which was forwarded as an example of the raw data on which the VMS and AIS information had been calculated. This was plotted on the 310 A3-size charts that were submitted in support of the prosecution case.

Additionally, detailed reports provided by the prosecution’s expert Edwin Derriman supported the prosecution case. These stated that, on an objective analysis of the plotted positions, in his opinion the vessels were fishing at the time alleged. In order to deal with these assertions, the defendants had to instruct their own expert, Nigel Blazeby of Blazeby Marine Consultants Ltd.

The case was allocated to His Honour Judge Laurie QC, and directions were set out in December 2016. There was a pre-inquest hearing on 16 February, 2016, but due to the complexity and detailed nature of the case, it was not possible to fix a trial date before 2 October, 2017. However, at the commencement of this trial, the judge had other commitments, and had to adjourn the trial until a date fixed in February 2018.

The trial was therefore adjourned for the third time until a date in June 2018 at Gloucester Crown Court before Judge Laurie QC. The trial itself lasted three and a half weeks, and consisted of detailed evidence from Derek Meredith and David Bickerstaff, as well as substantial expert evidence from both Edwin Derriman and Nigel Blazeby. All witnesses were subject to extensive cross-examination. At the commencement of this trial, the prosecution had reduced its counts from 48 to 40 in total, and – although the amount of supporting documentation was just as substantial as it had been throughout the case – the primary issue remained whether the four defendants could be convicted on, effectively, VMS evidence alone.

After one and a half days of deliberation, the jury delivered a majority verdict to the effect that all four defendants were not guilty of 32 counts. The jury was divided in respect of the remaining eight counts. However, the prosecution indicated that it will not be pursuing these eight counts.

All four defendants therefore stand fully acquitted of all charges.

Charles Hattersley, head of the marine department at Ashfords LLP, said that a number of very important issues for the fishing industry arose from a very protracted, detailed and complex case. In particular:

In response to a request from Fishing News for a comment, a DSIFCA spokesperson said: “The authority has devoted considerable time and resources to the recent three-week trial conducted in Gloucester Crown Court over alleged illegal dredging for scallops in the DSIFCA district.

“DSIFCA is very grateful to the jury for the close attention they gave to the case, and feels that the trial provided excellent guidance on the issues presented in such cases. We respect the decision of the jury, and understand that the process was lengthy and contained some evidential challenges.

“At the first hearing in the Magistrates Court in 2016, the magistrates agreed with the defendants’ solicitor’s view that the matter should be referred to the Crown Court. DSIFCA’s decision to prosecute was vindicated by the fact that the body of evidence was left to the jury as evidence capable of leading to convictions, and despite acquittals, there were four counts upon which the jury could not reach a verdict. The judge recognised the evidential challenges presented in such cases, and observed that the case required a trial for its resolution. There was no criticism of the decision to institute proceedings and to pursue the matter to trial.

“DSIFCA is leading the development of vessel monitoring systems (VMS), which we believe will be central to fisheries management and enforcement in the future. It is hoped that VMS use will enable fully-documented fisheries, which will be an essential part of safeguarding the future of the inshore fishing industry, and conserving the important marine habitats within these areas.

“Four successful prosecutions using VMS evidence have already been achieved by DSIFCA, and a further four financial administrative penalties, which also relied on VMS data, have been accepted by members of the fishing industry.

“A review of the trial is currently underway, and these proceedings have strengthened both DSIFCA’s resolve to prosecute where necessary, whether in summary trial or before the Crown Court, and also our knowledge of the matters to be addressed as evidence in such cases.”

On being acquitted of all charges, Derek Meredith said: “The last two years have been extremely difficult. Although acquitted on all charges, the legal costs incurred in clearing our names are crippling. Sadly, I am now left with no option other than to put Joanna C up for sale, solely because of the financial pressure the prolonged legal case generated.

“The pressure and stress David Bickerstaff, a lifelong Devon fisherman, and I have been under has been horrendous. I was placed on bail two years ago, since which time I have had to come ashore to focus on legal matters and to constantly go over charts. My family life has been non-existent.

“When we were first interviewed, there was no disclosure, so we didn’t know what it was all about, although we were expected to give an answer. The adjournment of the hearing at Plymouth, due to legal technicalities, cost us £40,000 alone.

“We were offered three deals, at a time when everyone said the prosecution should drop the charges. The second time, we even offered to pay our own costs just to stop it, and still they wanted to carry on.

“The only thing that this case was based on was VMS data – nothing else. No photographs, no witnesses, no catch data, nothing. This is why they need a review.

“DSIFCA brought in images of areas of reefs that I’ve never even steamed over.

“There is no rule about scallop boats being in controlled areas. Fully aware of our experience, skippers are now steaming flat out to clear these areas after curfew, putting their crews in danger on deck in bad weather. This isn’t right, although it does show that people who make these decisions in warm comfortable offices have little or no understanding of fishing, even though they make the rules and regulations, which inevitably are all take and no give.

“Ultimately, it was up to a jury with absolutely no fishing experience to apply common sense and return a not-guilty decision, that the authorities with responsibility for managing inshore fisheries couldn’t and didn’t want to see.

“Throughout an extremely dark period, the one ray of light has been the support we have received from just about everyone in fishing, as well as Charles Hattersley, Oliver Powell and Nigel Blazeby. Sincere thanks to all.” 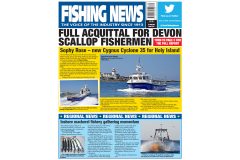