Fish and seafood exports and imports will be subject to new controls and checks if the UK crashes out of Brexit next year without a deal, reports Tim Oliver

Non-UK-registered vessels will no longer enjoy automatic access to UK waters in the event of a no-deal Brexit, says DEFRA.

As fears of a no-deal Brexit mount, the fisheries department has published a paper setting out the implications for the fishing and seafood industries.

DEFRA says that while a no-deal scenario ‘remains unlikely given the mutual interests of the UK and the EU in securing a negotiated outcome’, the government has a responsibility to prepare for no deal until the outcome of negotiations is known.

It has produced a series of technical notices setting out information to allow businesses to make plans and preparations in the event of no deal.

On fish and seafood exports to the EU, the paper says the EU will require exporters to issue a catch certificate with each export consignment of fish or fishery products.

Exporters will have to complete a catch certificate, and if the consignment was sourced from more than one vessel, they will also need to submit a ‘multiple vessel schedule’ with the catch certificate.

UK vessel owners or skippers landing into EU ports will also need to issue a catch certificate. The content of a catch certificate will need to be verified by the UK fisheries authority where the vessel is licensed (MMO, Marine Scotland, DAERA, Welsh government) and submitted to the authority in the EU importing country.

“UK fisheries authorities are developing an IT system to facilitate the increase in export catch certificates,” says DEFRA.

Imports of EU fish and seafood into the UK will also require a catch certificate. They will have to be submitted to Port Health Authorities or fisheries authorities ‘at least three working days before the estimated arrival time into the UK’.

DEFRA notes that the government’s fisheries white paper, published on 4 July, 2018, states the government’s intention ‘to move away from ‘relative stability’ towards a fairer and more scientific method for quota allocation, regardless of exit scenario’.

It restates that the UK will assume the rights and obligations of an independent coastal state under the terms of the UN Convention on the Law of the Sea (UNCLOS) relating to our 12-mile territorial waters and 200-mile/median-line EEZ.

DEFRA says, “We will be responsible for managing natural marine resources in these areas, and be able to control and manage access to fish in UK waters. We will meet our international obligations under UNCLOS to co-operate with other coastal states over the management of shared stocks.

“We will ensure that appropriate fisheries control and enforcement measures continue.”

DEFRA says that while non-UK-registered vessels will no longer enjoy automatic access to UK waters (subject to any existing agreements relating to territorial waters), UK-registered vessels fishing in UK waters will have to continue to abide by relevant legislation and licence conditions, including the economic link criteria.

UK fisheries administrations will tell UK quota holders what their quota allocation will be in January each year, and will seek to do so in 2019 to minimise disruption to fishing and allow fishermen to plan for the year. There will be no automatic access to quota exchanges between the UK and EU.

The government will also confirm arrangements for vessels subject to the Western Waters effort regime.

There will be no automatic access for UK-registered vessels to fish in EU or third-country waters (subject to any existing agreements relating to territorial waters).

UK-registered vessels will no longer have an automatic right to land fish in any EU port. They will have to notify their intention to visit an EU port, and present information relating to the vessel and catch. They may be subject to inspection – this could include a full document check, inspection of the catch and, where information has been provided electronically, database checks.

The same will apply to EU vessels wishing to land in a UK port.

All common marketing standards for fish sold for human consumption – whether in the UK or the EU – will remain the same, including quality, size, weight, packing, presentation or labelling, and minimum marketing sizes. All labelling requirements for fish and aquaculture products for onward sale in the UK or EU will also remain the same (whether they are whole, filleted or processed).

The responsibilities of POs to promote sustainable fishing, market members’ products, build relationships with the supply chain and, where appropriate, manage quota, will remain unchanged.

The UK government has guaranteed that in a ‘no-deal’ scenario, all structural and investment fund projects, including EMFF projects, approved before 31 December, 2020, will be fully funded.

The ‘unique’ relationship with Ireland must be respected if there is no Brexit deal, says the UK government.

DEFRA says, “The Irish government has indicated it would need to discuss arrangements in the event of no deal with the European Commission and EU member states. The UK would stand ready in this scenario to engage constructively to meet our commitments and act in the best interests of the people of Northern Ireland, recognising the very significant challenges that the lack of a UK-EU legal agreement would pose in this unique and highly sensitive context.”

The full document can be seen at: bit.ly/2P6TKIt

‘We won’t fall off a cliff’

South Western FPO chief Jim Portus said the no-deal document had been anticipated, and had been discussed at various meetings throughout the year.

He said he believed a no-deal scenario was unlikely, but in the event that it happened, the work of POs would go on as usual.

“The document makes clear that the job and role of POs – to maintain sustainable fishing, market our products and manage quotas – will be unchanged,” he told Fishing News.

“It won’t change our way of working; fish will be sold in the usual manner, and head for Portsmouth or Dover to reach the continent.

“The bottom line of this document is that it highlights that we have all sorts of international obligations, other than the CFP and our treaty obligations to the EU.

“It’s clear that if we crash out with no deal, we do have certain obligations we signed up to a long time ago, such as the UN convention and the legislation that transfers all current EU regulations into British legislation in the name of the EU.

“We won’t fall off a cliff; we’re not going to suddenly have people going out and fishing willy-nilly, or buying/building new fishing vessels, because Westminster loses its head and decides it’s a free-for-all.

“That’s not going to happen under any circumstances. Someone will set the rules.”

Some 75% of the UK catch is exported, mainly to the EU, and a high proportion of the catch of prime fish and shellfish from the South West is exported.

Jim Portus said any problems that may arise in exporting fish to the EU were beyond the scope of POs to address – that would fall to the fish merchants and processors.

“Our involvement in the marketing of fish stops the moment it has been sold once – but it is complicated for all of us,” he said.

He anticipated that software to generate catch certificates and export documents would be developed in the coming weeks, unless there was a decision to stay in the customs union. But he thought this was unlikely, as the prime minister and government appeared to be committed to leaving the customs union and single market.

Despite the popular belief that Brexit will mean taking back control of our waters, DEFRA secretary of state Michael Gove was clear last week that the UK will honour the quotas that are agreed at this year’s December Fisheries Council. This means that EU fishermen will continue to have access to UK waters as they do now, for the first nine months of Brexit.

The minister was questioned by the House of Lords EU Energy and Environment Committee on the extent to which DEFRA is prepared for a no-deal Brexit.

When asked whether his department had adequate resources to police access to UK waters, the secretary of state explained that he had presented a business case to the Treasury for more staff and more patrol boats. As some will need to come from the Royal Navy, he said he had written to the defence secretary only the day before ‘to reinforce the importance of the business case’.

Mr Gove said one of his biggest concerns is what will happen at the UK’s ports. One-fifth of the UK’s exports go via the Dover Straights and the Eurotunnel to Calais. In a no-deal scenario, the UK becomes a third country, and all animal exports have to be checked at a border inspection post (BIP). There is no BIP at Calais, so all animal exports will have to be rerouted. This is likely to have serious implications for UK road traffic, and for capacity at other ports.

Prime Minister Theresa May offered to extend the Brexit transition period for some months at a summit meeting with EU ministers in Brussels last week, reports Tim Oliver.

The idea had previously been floated by EU negotiator Michel Barnier.

It was originally hoped that the summit would agree a Brexit deal that the 27 ministers could then put to their countries for ratification before the withdrawal date of 29 March next year.

But deadlock over how to avoid a hard border between Northern Ireland and the Republic of Ireland has stalled the talks.

An extension of the transition period has raised fears that it would be open-ended, and keep the UK locked into the EU indefinitely.

The SFF said in a statement: “We understand the logic for some of an extension to the implementation period, but for fishing, it would make no sense whatsoever to force the industry to operate under the CFP beyond 2020.

“All the practical international processes for the UK to become an independent coastal state, exercising its rights and responsibilities accordingly, are already in place.

“Further postponement would erode, if not endanger, our emergence as one of the primary coastal states in the NE Atlantic.

“There is a genuine fear among fishermen that any extension to the UK’s time in the Brexit waiting-room would be used by the EU to place conditions on the return of fish stocks that are rightfully ours, via long-term agreements that would be difficult to disentangle in years to come.”

“It’s ‘Project Fear’. The EU27 side are making statements to put the fear of God into the UK,” he said. “They want to sow fear, doubt and concern over Brexit, so that people calling for another referendum get their way. My opinion is that even if they got a second referendum, people would still go for Brexit.

“I’m a democrat, and we did the democratic thing two years ago.” 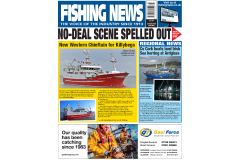