EU fisheries ministers were facing ‘a perfect storm’ as they met to reach agreement on TACs and fishing opportunities for 2019 at this week’s fisheries council, reports Tim Oliver

The council was being held on Monday and Tuesday (17/18 December), and finding ways to avoid serious choke species problems was one of many difficulties facing the ministers.

The council will be the last in which the UK takes part before Brexit, and 2019 also heralds the full implementation of the landing obligation/discards ban on 1 January.

Heavy cuts to the TACs of the important North Sea demersal stocks shared with Norway were agreed in EU/Norway talks on 7 December (see below), and North Sea cod could become a serious choke risk. The fisheries council will still have to approve the agreement, but this is usually a formality.

Other major choke risks include Celtic Sea haddock and Irish Sea whiting, and there are also serious concerns over west of Scotland cod and whiting.

Setting out the scenario for the council, NFFO chief executive Barrie Deas said: “The December council of ministers will not only be the last in which the UK participates, but one of the most complex. A perfect storm of conflicting regulations means that ministers face a number of unpalatable choices and trade-offs.”

“It is clear that not all these objectives can be achieved simultaneously, and so ministers must find a way through to the most reasonable trade-offs,” said Barrie Deas.

“Chokes could emerge with almost any stock, depending on changing scientific advice, whether TACs have been set at the right level, or the rate of quota uptake. The stocks in which these conflicts are at their most acute, however, are North Sea cod, Celtic Sea haddock and Irish Sea whiting.”

The stock has been increasing in past years as fishing effort has declined, but lower than average recruitment and a change in the scientific perception of the stock led to ICES advising a 47% cut in the TAC. This was reduced to 33% in the EU/Norway talks, but it will still present fisheries managers and the fishing industry with a choke risk during 2019.

If zero catch advice for cod is implemented, vessels would be immediately choked and have to cease fishing in the Celtic Sea. One proposed solution is for a ‘Union quota’ for cod, in which by-catch quota is pooled for the use of those who need it to avoid chokes. But there has been no consensus on how such a system should operate, and discussions continue on how to resolve this dilemma.

The choke risk for haddock lies with the UK’s low quota share and a reduced TAC. Industry has been working with scientists on enhanced selectivity, but this multifaceted problem will not be solved without a TAC set at a realistic level.

Whiting discards are very high in the Irish Sea Nephrops fishery, because small whiting has a very low market value. There has been significant progress in introducing more selective fishing gear, but whiting remains a stubborn choke risk.

“This is a fishery in which the TAC serves no purpose, and does not constrain fishing mortality. The only solution appears to be the removal of TAC status, or listing whiting as a prohibited species. Whichever of these options is taken, whiting will be returned to the sea in 2019,” said the NFFO.

The TACs for North Sea joint stocks were agreed at the EU/Norway negotiations held in Bergen and London, which concluded on 7 December. The agreed TACs include cuts for three major roundfish stocks: whiting (-22%), cod (-33%) and haddock (-31%). There are increases of 18% for saithe and 11% for plaice.

“There is an outstanding issue on whiting, regarding the scale of deduction relating to a de minimis exemption for part of the fleet. The magnitude of the Commission’s calculations is being challenged,” said the NFFO.

On the pelagic front, a cut of -35.9% was agreed for North Sea herring. The NFFO said that the block between Denmark and Norway’s positions on cuts to the industrial by-catch fleet was eventually resolved with a smaller reduction being accepted (ICES had advised 51%), and a working group established to discuss this further next year.

Scottish fisheries minister Fergus Ewing said he was ‘disappointed’ at the outcome of the EU/Norway negotiations.

He said they appeared to have ‘pushed aside the need to prioritise critical landing obligation issues of North Sea stocks, in favour of a deal that is neither fair nor acceptable to Scotland’s fishing industry – particularly in regards to the source of the blue whiting currency and the destination of the incoming Arctic cod’.

He added, “I cannot accept this situation and the excessive associated costs and losses that Scotland incurs as a result. I have therefore requested that our officials work together as a matter of urgency to ensure that the deal sought at the December council better reflects an appropriate and fair deal for Scotland.”

The EU landing obligation/discards ban, which kicks in fully on 1 January, 2019, is one of the biggest threats the industry has ever faced, and was set to be top of the agenda at this week’s fisheries council.

It will apply to all quota species, unless a specific de minimis or high survival exemption applies.

NFFO chief executive Barrie Deas said that the full implementation of the landing obligation ‘presents a number of challenges for the fishing industry, fisheries managers and enforcement authorities, on a scale of magnitude not seen before’.

He said, “The problem of chokes in mixed fisheries, and the challenge of monitoring and controlling fishing activities in diverse fleets across a vast marine environment, are at the top of the list of those challenges.

“In the past two weeks, fisheries minister George Eustice has described the problem of choke risks as ‘intractable’. During the same period, a senior CEFAS scientist told a parliamentary committee that the consequence of a fully enforced landing obligation would be chokes. Finally, a senior fisheries regulator recently described the landing obligation as ‘unenforceable’.

“These comments provide an idea of the scale of the challenge presented by the implementation of the landing obligation.”

He said the regulatory regime underpinning the landing obligation is still in a period of adjustment. Important decisions still had to be made at the December council and beyond, which will have a direct bearing on choke risks in specific fisheries.

The MMO, DEFRA and the NFFO met in London on 4 December to discuss how to deal with this complex of issues in the coming year.

After extensive discussions in which various aspects of the implementation of the landing regime were discussed, it was agreed that:

Scotland’s fisheries secretary Fergus Ewing called on the UK government to ensure that Scotland’s interests were fully represented at the December council in Brussels, following a ‘disappointing outcome’ to the EU/Norway negotiations (see above).

He called for the UK delegation to prioritise the resolution of choke risks associated with low or zero TAC stocks above all other issues at the meeting, given the potential impact on Scottish fishermen.

The Scottish minister said: “We now know what deal the UK government proposes to take to Brussels for this year’s December council negotiations and, although I support the general principles outlined, I have some major misgivings about some of the details.

“I’m particularly concerned about the arrangements outlined for west of Scotland cod and whiting, which is why the delegation has to consider the brokering of a workable solution for those stocks as its highest priority.

“I’m sure my counterparts in London need no reminding that this could be the last-ever council in which the UK government has a vote. It’s more important than ever before to secure the best possible deal for Scotland and the UK’s fishing industry, as the outcomes could endure for some time before we are in a position to directly influence future negotiations.

“The Scottish government will fully support all efforts to secure the best deal possible.”

SFF chief executive Bertie Armstrong said: “We are getting close to the point where Britain leaves the EU, and this will be the last December fisheries council that we attend before we begin the transition to becoming a coastal state in our own right.

“And with a fisheries agreement to be negotiated, it is certainly not in the interests of the EU27 to adopt hardline positions in these talks.

“Management of fish stocks against the backdrop of an unworkable discards ban that takes little account of the mixed fishery in Scottish waters, and significant cuts to key stocks such as cod and haddock that will exacerbate this problem, must be a priority.” 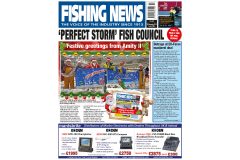