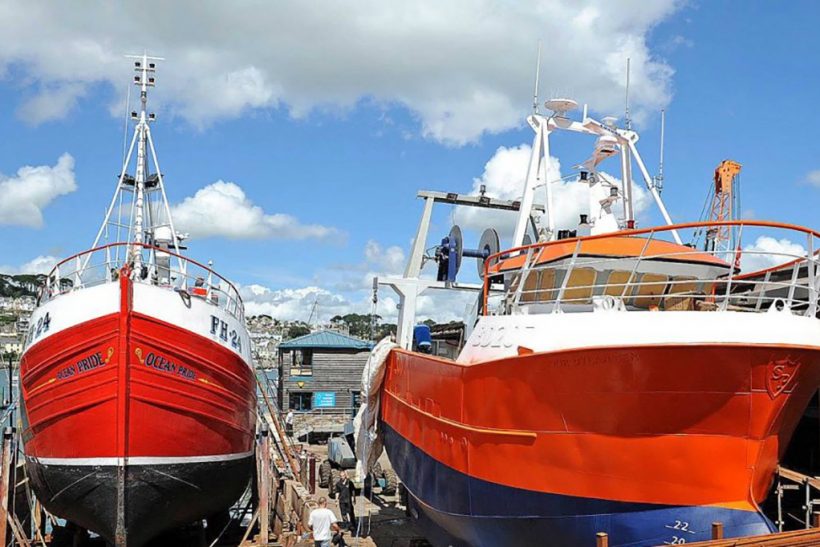 Picture above: A typically busy scene at Toms boatyard in Polruan, with the Newlyn netter Ocean Pride on the main slip for a full repaint and shaft repair, and the yard’s latest build Our Dylan Ben, for North Devon skipper Scott Wharton.

At its busiest time of year, the owners of the Cornish boatyard C Toms & Son Ltd hope for “at least one new-build over the winter,” said Alan Toms who, together with his son Paul, leads the family business, reports Phil Lockley.

As the largest fishing boatyard in the south west, Toms multi-slip yard at Polruan is the centre of refits on wooden and steel vessels, most from the westcountry, Wales and southeast England.

“The boatyard continues a strong heritage of boat building, one that has taken place in Polruan for centuries,” explained Alan Toms.

“We have two slipways that can accommodate vessels up to 300 tons, and crane facilities to 50 tons, together with a well-stocked chandlery, fuel sales, showers and laundry facilities. The fishing industry has been, and remains, the core of our business.” 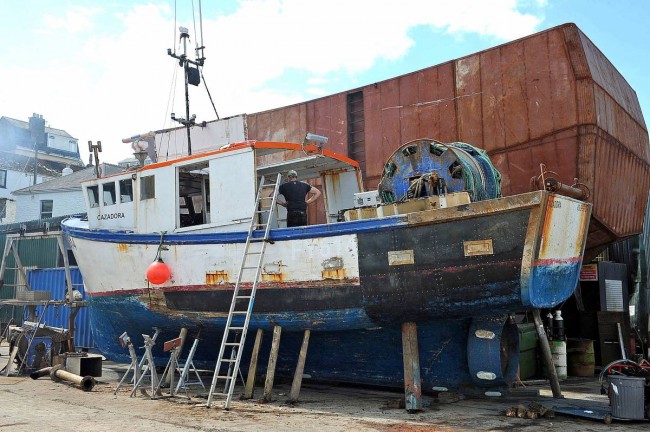 The Looe trawler Cazadora lifted out of the water by Tom’s, alongside the hull of a new vivier-crabber built to be completed at Newlyn.

However, Mr Toms is concerned at the present lack of serious enquiries for new builds.

He told Fishing News, “Yes we are very busy, we always are at this time of year. Biggerboat refits come mainly from Brixham. Normally we get one beam trawler per tide, and when we haven’t, we have large sailing ships. The smaller boats at this time of year come from all around the southwest and further afield, but for the winter that refit work reduces and doesn’t cover our 16-strong work force. We need a new-build and while we hear how the industry is picking-up in some areas where skippers are keen for new builds, I’m sorry, but we are not seeing that, and it is a concern to us.

“Normally, by this time of year we have had several serious enquiries, and of those we would have signed, or be about to sign, a contract. One thing we have rarely had is time-wasters; when a skipper gets in touch it is a serious enquiry, but so far we haven’t had even one enquiry. We can keep going on refits, but that’s not what this yard has ever done; as well as refits we have always had new builds of fishing vessels, like the 11.95m steel trawler Our Dylan Ben for Scott Wharton, a full-build shortly to be ready for sea trials. 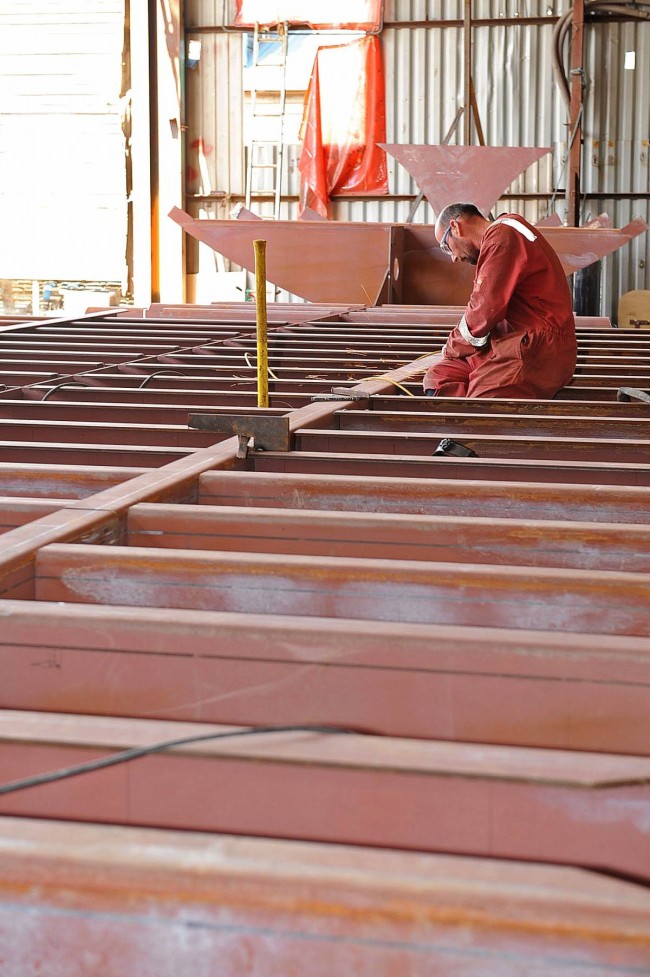 Work in progress on two barges in the yard’s fabrication shed.

“We have two steel barges under construction but I have can’t remember a year in the history of this yard where there hasn’t been a fishing boat under construction. This may be the first time, but hopefully that that will not happen.

“Recently we completed a hull-only contract for a vivier crabber for Rowse Fishing Ltd of Newlyn, and the hull is waiting for an opportunity at Newlyn where the completion will take place. We see orders going to boatyards in northeast England and Scotland, as well as Europe, but I fear that the industry down here is nowhere near as buoyant as the fishing industry in those areas.

“In the terms of building boats, we are not a big-boat yard, that’s a different league of yards and is not one we want to be in. Building a 16.5m boat is big enough for us. We have planning permission to build another, higher, shed, because as time goes on boats are getting higher in design terms. In the present shed we have to remove part of the roof on occasion, to fit the wheelhouse, so a new shed would be excellent, but we have to have new-builds to support that investment. 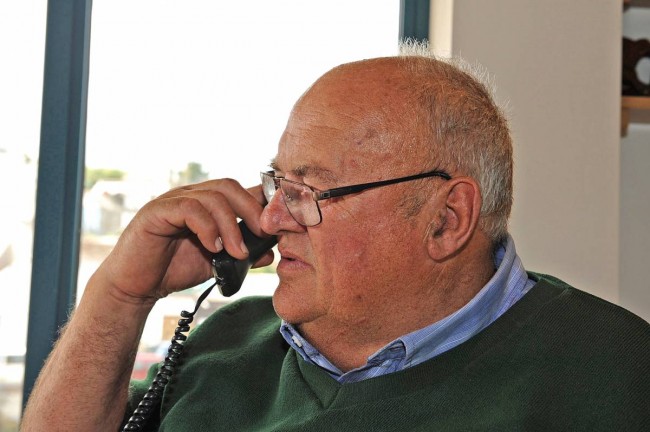 “Boats are changing in design every year, faster in some occasions. New-builds have to be more efficient and we have kept the yard up to date with that. Within our size-range of boats, we have to build ‘big’ small boats, like the Our Dylan Ben. This has 5.5m of beam and will draw about 3m, quite a bit deeper than previous boats of this class. The boat will swing a 1.8m four-bladed propeller and have a 7:1 reduction gearbox. While no more power in terms of the engine, it will be more efficient in delivering that power. This is the modern design that skippers need.

“We do have previous customers who are looking for another boat, but you can’t bet the winter on a possible build. We could cut down the staff but what happens in the summer months when we are busy? It’s a job to know what to do, but I can’t honestly believe that the industry around the south and southwest is on the way up in terms of new builds.

“Perhaps things might be improving, if so, we are the best yard for building steel or wood boats up to 16.5m in length. That is a message I want to get across to the industry.” 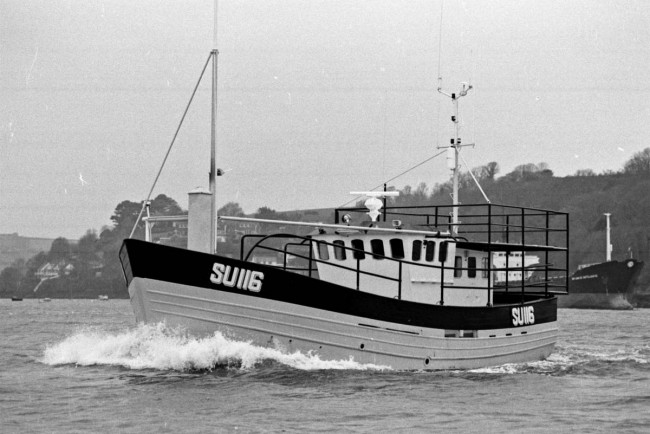 Charles, or Charlie as he was known, was born near Taphouse, where he was later apprenticed to a blacksmith. As a young man he moved to Fowey, a busy town opposite Polruan on the River Fowey, working as a blacksmith for Gordon Langman in Caffa Mill, later marrying Louisa Kendall, the daughter of a ship’s captain. “They lived for a while at the riverside North Street, but after Charlie was offered work at Slade’s shipyard in Polruan they moved to Fore Street in Polruan,” explained Alan Toms.

He told how Slade’s business collapsed after the First World War and Charlie was laid off. In 1922 he started his own business, based in premises between Slade’s Yard and Brazen Island. He and his employees undertook ship repairs, but his own heart lay in the repair of buildings around the parish. An artisan rather than a businessman, and never a rich man himself, he was known to accept goods, such as eggs, in lieu of payment when others were in financial difficulties. He was never short of work and his business survived, due in no small part to the thrift and hard work of his wife, Louisa. 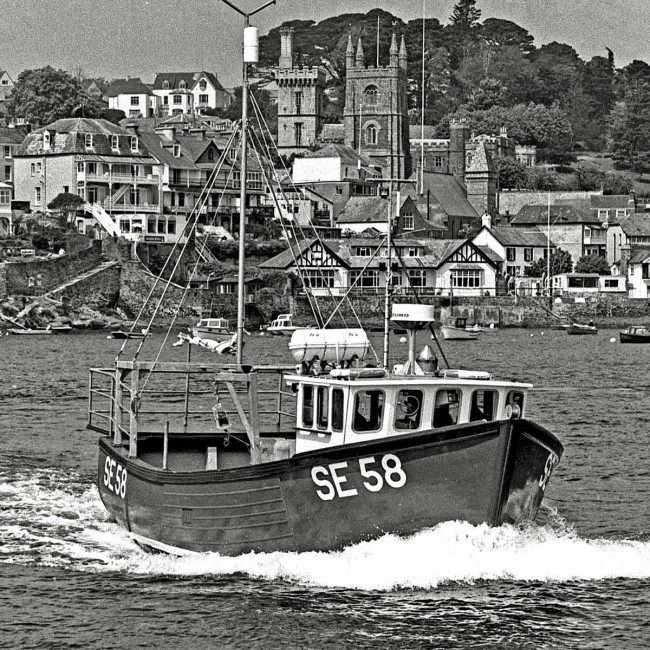 … and George Edwin are typical of the wooden-hulled boats Toms built in the 1980s.

His son John (Jack), a marine engineer, joined his father’s business in the late 1930s, and C Toms and Son was incorporated in 1941. A staunch Methodist and lay preacher throughout his life, Charlie returned to live in Fowey before his death in 1964. The company has expanded and prospered under his son and grandchildren.

The following years went well, and over the past three decades, C Toms & Son has built “many, many boats,” Alan Toms confirmed. “In the 1980s when all the grants were available we were launching one new boat a month, sometimes more than that. The yard was flat-out with new builds, many being wood boats, and the 9.9m craft were popular; netters, trawlers and potters. And the years after that were still good, let’s hope that will return when the fishing industry improves.” 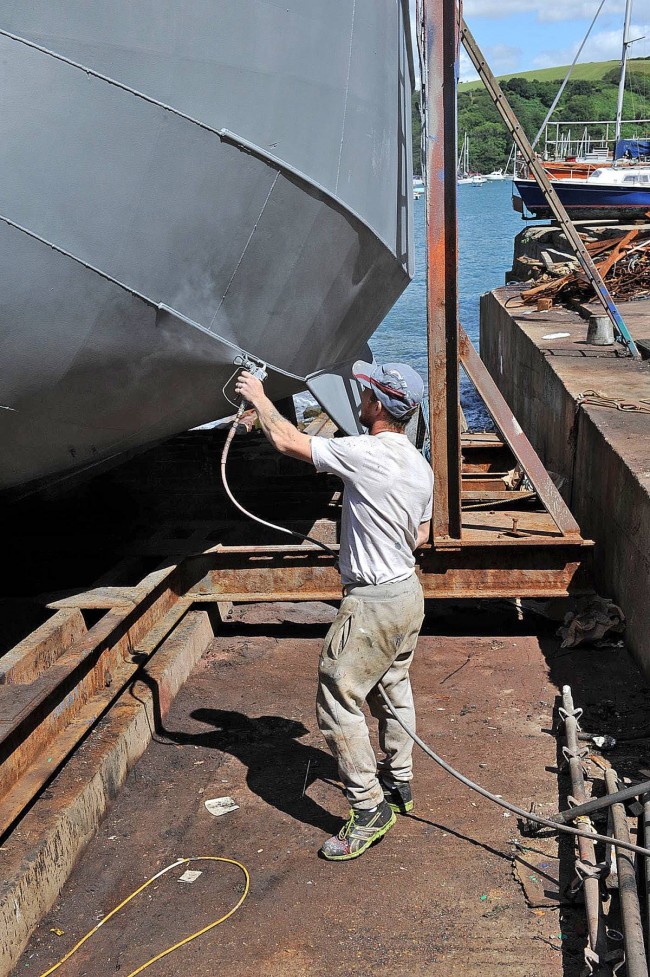 Steve Green in action with the spray gun on Spirited Lady III.

Trading under his own name, specialist marine painter Steve Green employs five men and is a ‘permanent venture’ at C Toms & Son.

Steve Green told Fishing News: “There is never a shortage of work here. I have been a specialist marine painter for a very long time, and have worked around the world, but trading at this yard is very good; the facilities are good and we can cope with any size of boat that can be hauled-out at Toms’ yard.

“There seems to be a more confident trend among skippers. I think and hope that the down-years are over. Skippers are planning ahead again, and so are we.

“To have a team of five skilled painters and myself is about right, we are always busy and lately have done full-paint contracts on Ocean Spirit and Spirited Lady III, antifouled the netter Ocean Pride and a full paint job is almost complete on the new build, Our Dylan Ben.

“This year we have had contracts on several beam trawlers too, either small or major jobs, and there is a waiting list, so I’m quite confident in the fishing industry.” 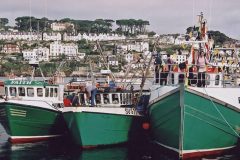 Work with Europe, but don’t be ruled by Europe 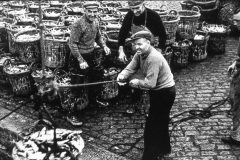