Above: 160 fishermen took part in a dignified demonstration outside the Scottish Parliament in Edinburgh last Wednesday morning, in protest against the Scottish Government’s intransigent approach to MPAs. In spite of continuing strong opposition from the fishing industry, the RACCE Committee voted in favour of applying 13 MPAs, including the highly contentious South Arran management area, which will impact heavily on Clyde fishermen.

The RACCE Committee will now recommend the MPA proposals to the Scottish Parliament, when MSPs will have the final say on the proposals in a parliamentary vote.

Proposed management measures for another three MPAs, Loch Sunart to Sound of Jura, Small Isles, and Wester Ross, are currently under further consultation following strong objections from the fishing industry against the original proposal for these sites.

Before what proved to be a heated debate commenced, members of the Clyde Fishermen’s Association, including fishermen from Campbeltown, Carradale, Tarbert, and Troon, many of whom had been on the road since 3am, held a dignified demonstration outside the Scottish Parliament against the proposals, which will have considerable negative impact on their livelihoods, as well as the remote coastal communities they live in. 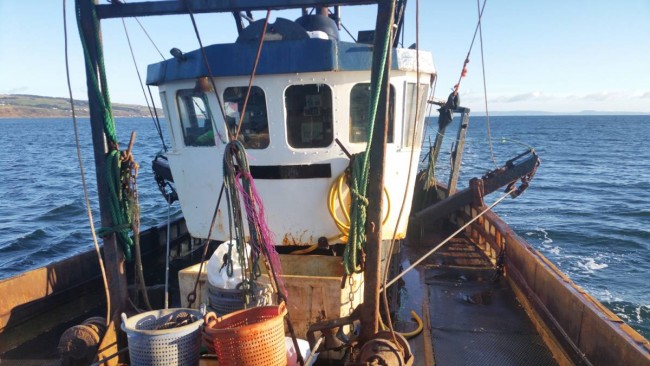 The CFA was supported by the Mallaig and North West Fishermen’s Association, as well as skippers and crewmen from Fraserburgh and Port Seton, who traditionally fish prawns on a seasonal basis in areas from which they could now be displaced.

“The Cabinet Secretary departed from these options in a number of cases, perhaps most controversially in the South Arran MPA.

“Unfortunately, despite the practical demonstration of deep concern, the Scottish Parliament Rural Affairs Committee failed to hold the Cabinet Secretary to account for his departure from government policy. The SFF is now calling on MSPs to put livelihoods and communities before green politicking.

During the RACCE Committee discussion, Cabinet Secretary Richard Lochhead agreed that some vessels could see their revenues cut by as much as 20%, but argued that the overall impact of the measures on the fishing sector would be only 2.4%, while he also said that he would be monitoring any economic impacts of the MPA.

“This is controversial, and I know these are very tough debates because we’re trying to balance conservation with economic impact, but I think we have to have a sense of realism about the figures and phrases that we are using. There is no danger of the scallop sector being wiped out by the South Arran MPA. As far as I’m concerned we have done everything that we should have done.”

RACCE Committee member, and Argyll and Bute MSP, Mike Russell, who acknowledged that the consultation had been ‘badly managed’ and called for all sides to ‘take a step back’, asked, “How did we get into this mess?”.

Principle of sustainable use ignored

Commenting on the RACCE committee’s decision, Bertie Armstrong, Chief Executive of the SFF said: “We are now left with the statutory nature advisor’s preferred options badly overreached, most obviously in the South Arran MPA, while the Cabinet Secretary point-blank refuses to countenance that significant damage will result from his actions. This flies in the face of his equally important established policy priority – the principle of sustainable use.

“The preferred options, from four years of consultations, would deliver both the conservation and sustainable-use responsibilities resting with the Minister. A real opportunity to have the industry fully behind a rational set of measures, which could be presented on the international stage as backing Scotland’s world-class seafood, has been absolutely ruined.

“We fully support the concept of MPAs, and have long campaigned for the need of conservation zones to meet core sustainability and environmental objectives.

“However, the South Arran MPA, as it stands, goes far beyond what was agreed upon during the initial consultation, which comprised a set of sensible measures that was even approved by the government’s own statutory nature advisor, Scottish Natural Heritage, as being the preferred option for meeting the twin objectives of marine conservation and sustainable fishing. 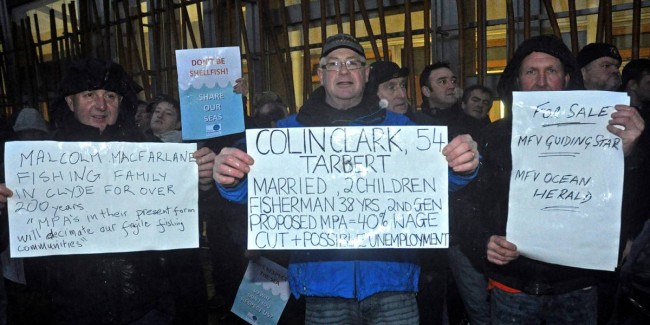 “Instead, we have a purely political decision of an overly-restrictive MPA, made to appease the green lobby, rather than a common sense management arrangement that would have conserved vulnerable habitats, while at the same time protecting fishing communities.

“It is entirely possible to allow limited and carefully controlled fishing within parts of MPAs where there are no features of conservation importance, and to impose a blanket ban over a whole area is totally irrational and unnecessary.

“One of the founding objectives of the Common Fisheries Policy is to enable the continuation of fishing, while ensuring environmental sustainability – a principle the Scottish Government is completely ignoring. It is also ignoring the widespread local community opposition to these proposals.”

“What a great turnout by fishermen and friends who are passionate about protecting the communities they live and work in.

“Richard Lochhead should hang his head in shame. The SNP government was voted in by the very people he has let down. At a time when fish farms and other local businesses are laying staff off at unprecedented levels, fishing is the glue that bonds communities like Mallaig together.”

“Could Mr Lochhead please pass on information about all the jobs the Small Isle MPA is going to generate.

“We have a future, despite others trying to prove otherwise. In common with every other father, I do not want to see my son’s dream crushed. Aaron has always wanted to maintain our family’s long tradition of fishing, as he has done for the past four years, as a crewman on Caralisa. Why should his lifetime’s ambition be taken away from him, when the industry has always implemented a wide range of proven successful conservation measures?

Elaine Whyte, CFA secretary said: “The impact of the South Arran and other MPAs will, without doubt, have huge and unnecessary negative socio-economic impact on the West Coast fleet and beyond. Many fishermen feel their businesses will realistically face a 50% reduction, which will be unsustainable. The knock-on effect of these MPAs has also greatly alarmed local communities in coastal fishing areas and beyond.

“In the past two months alone, over 240 responses were submitted to the CFA/Government, largely opposing these MPAs, and explaining in very real terms how individual families, towns and businesses will be heavily impacted; job losses and business closures are fully expected. Indeed, very real worries regarding the loss of limited sheltered ground and safety to crew have consistently been raised, alongside displacement issues which could potentially lead to more unsustainable fishing practices in the long-term in smaller areas.”

“The Cabinet Secretary publically claimed that some individuals were supportive of the MPAs, but feared intimidation should they speak out. It should be made clear that no known examples of intimidation have been provided, and this is a common claim by some group representatives. Most fishing representatives feel this is a very serious claim with absolutely no basis or truth.

“Although the MPAs were passed by the RACCE committee members by seven to two votes, the committee conceded that the process should be improved, going forward. Despite the disappointing result for many fishermen and their communities, the demonstration was a success, as a show of industry and community unity, which is much needed in going forward. The fishing industry is now considering its next steps in the process, which may see further actions implemented.

“One thing is clear; it’s now apparent and widely understood among the fishermen that their participation and engagement has developed and must remain active, and they represent communities and their best interests too. Their continued voice must be heard, preferably in a more democratic and appropriate dialogue by politicians and partners.” 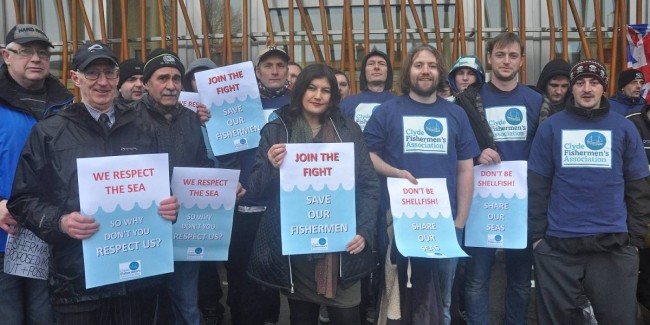 CFA Chairman Kenny McNab (who was awarded the MBE for service to the fishing industry in January 2016) and Secretary Elaine Whyte, with CFA members.

Unsubstantiated reports of intimation cause offence

From a personal first-hand perspective, subsequent unsubstantiated accusations and claims made on social media and national television, that fishermen allegedly intimidated and harassed environmental lobbyists, are difficult to accept and totally disrespectful to those fishermen whose future, as well as that of their families, is now clearly on the line.

Apart from leaving the small degree of shelter provided by the overhanging roof of the Scottish Parliament from the incessant heavy rain, to move forward 20m for a group photograph – after permission for this was requested by Fishing News and immediately given by co-operative and friendly police – the fishermen stood in the same place for nearly three hours, talking quietly with their friends, while occasionally shouting ‘support the fishermen’ as MSPs entered the building.

Tom Bryan-Brown from the Mallaig and North West Fishermen’s Association said that he was impressed by the turnout to the demonstration at the Scottish Parliament.

“Fishermen from all over Scotland attended the MPA protest, and that shows the depth of feeling this issue has generated throughout the industry. I have received the same message from fishermen ever since the Marine Scotland consultation response was published in June 2015. Namely, that the ‘ambitious’ programme went far beyond anything that had been originally proposed by Marine Scotland, and had been supported as fulfilling the conservation benefits by Scottish National Heritage.

“What fishermen cannot understand is why Marine Scotland had not spoken to the industry in a meaningful fashion over this process. Scottish Government went through the consultation procedure but, in the end, areas to be shut down and areas to be left open were measured on VMS data and Scotmap data, and Marine Scotland officers have, as a result, excluded towing areas of significance and included areas of insignificance in the latest draft of maps.

“This represents a top-down approach to management that was unnecessary and counter-productive to the interests of the mobile sector, and did no favours to the perception of coherent consultations in general.”

Tom Bryan-Brown also said that the MNWFA was still open for business, and that it was not too late for Marine Scotland to contact the MNWFA, and its sister organisations, to get the MPA process right. 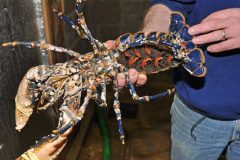 Surreal set of circumstances leads to some bizarre times – SWFPA