Turning over a new REAF

‘Fishing must not be traded away – again!’ was the vehement mantra of the Renaissance of East Anglian Fishing (REAF) conference at Lowestoft on 15 March, reports John Worrall

Over 100 delegates from fishing, processing, education and politics gathered at the Hotel Victoria in Lowestoft to hear a panel of speakers, including fisheries minister, George Eustice, give their thoughts on how the fishing sector could capitalise on Brexit.

The event was organised by local MP, Peter Aldous (Waveney, Con), together with June Mummery, managing director of BFP Eastern, which runs Lowestoft fish market, and fisherman, Paul Lines, both part of the Lowestoft Fish Market Alliance. All three have been campaigning for the future of East Anglian fishing.

Setting the scene, Peter Aldous MP said that the forthcoming fisheries white paper, and then the fisheries bill, would provide the framework for UK fishing policy to replace the CFP. East Anglia now derives little benefit from its rich fishing grounds because local landings are almost all by the inshore fleet, while catches by bigger EU boats and flagships are landed in Europe. 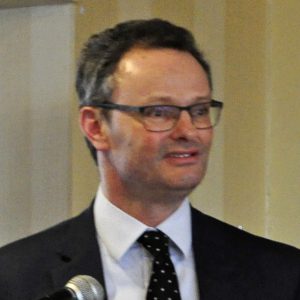 Nationally, he added, UK vessels land 40% of the catch from UK waters, while Norway and Iceland land 83% and 90% respectively in theirs. East Anglia’s inshore fleet does not get a fair slice of the cake, and yet the six vessels of the Lowestoft PO land their catches in the Netherlands and elsewhere. That will have to change.

“There is no point in Brexit if, afterwards, locally-caught fish, instead of being landed in Holland, France or Spain, are landed in Peterhead, Grimsby or Plymouth. We need fish landed here,” he said.

On support and infrastructure, the MP said Waveney District Council is putting together a funding bid for a study to identify what is needed. Although a surprising amount of fishing infrastructure remains in East Anglia, particularly in Lowestoft, it might not have the capacity to cope with a significant increase in landings.

The regulatory framework, for both catching and selling fish, needs a whole-industry approach from net to plate. Management needs to be local, sustainable, collaborative and evidence-based – bespoke management of individual fisheries with a bottom-up approach, where scientists and regulators work together. CEFAS, based in Lowestoft, needs to be at the heart of it.

“The regulatory framework, for both catching and selling fish, needs a whole-industry approach from net to plate”

Peter Aldous concluded, “And, yes, there is a risk of fishing again being a bargaining chip, and it is essential to tell government that it mustn’t happen. MPs from all round the country have made the point. Fishing is small in economic terms but not in political terms, and now, in Brexit, it is totemic.”

The first of the panel speakers was Gregory Darling of Applied Satellite Technology, Great Yarmouth, which for 15 years has provided satellite monitoring of the entire UK fishing fleet for DEFRA.

He said that REAF needs a policy document to push forward. All fishing activity – commercial and recreational – needs to be considered, because the economics stretch far and wide and form an extensive ecosystem. But policy should be regional, with an emphasis on smaller vessels, to redirect revenue to coastal communities and produce an economic halo effect through tourism, with value-added products such as kippers and crabs.

New quotas should not go to those who already have them and nor should they be traded, because that would discourage local fishing and encourage the big boys. Communications should be employed in a holistic way to monitor activity, and to report catches to a local market on the way in. The technology is there. 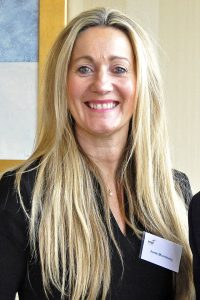 June Mummery said Brexit was a lifeline with which UK fishing could be as successful as Norway’s and Iceland’s. REAF has chosen Lowestoft as the hub and, with repatriation of fishing, the answer to the area’s economic problem lies just out to sea.

At present, 15 boats are landing to the fish market with its daily shout auction, but a successful REAF would potentially double that, with scope for 20-25m vessels landing fish for local processing and sale to the UK and abroad.

New vessels need to be commissioned and the industry would then need new workers, and that concerns her. Back in the day, most men and women working in the fishing industry didn’t have a single qualification when they started, but they picked the job up quickly. But life is no longer like that. These days, if you can’t pass maths and English, job prospects look pretty grim.

As part of REAF, Seafish – 80% of whose funding comes from a levy on the seafood industry, including fish merchants and processors – could work in conjunction with Lowestoft College to bring courses and apprenticeships to the seafood sector.

But everything depends on the government not selling the fishing industry away.

Simon Bywater of Eastern Seafish Training Association (ESTA), one of a number of organisations providing Seafish-approved training, for the whole seafood industry, said that 45% of ESTA funding came from EMFF and the MCA, and the level would need to be maintained after Brexit, and he understood that it would be.

Local fisherman Paul Lines was another demanding that fishing opportunity be repatriated. “When I came to Lowestoft in 1974, fishing was a focus of a vibrant community, but the UK had just joined the EEC. This had an almost immediate impact on Lowestoft, and the demise of the local fleet and strangulation of supply; the whole infrastructure began to break down.

“Fishing has been tied down by the EU, where the pro-Dutch lobby seems to rule. Quota needs to be repatriated to the UK to make Lowestoft a hub of catching, processing and marketing again. It still has a good fish market. The fish to be taken back from European friends has a very significant value, more so for the fishing community along our coastline. 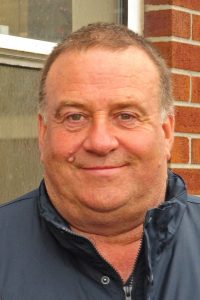 But he added: “Ironically, we have a company in Lowestoft where, of the share we get now, 6,000t goes straight back to Holland. I don’t know how that would be sorted out, but I think it’s a bit of a disgrace that not a single fish of that is landed to our market at the moment.

“Brexit, and taking control out to 200nm or the median lines, is a one-off lifeline for the inshore fleet now hanging on in the corner of Lowestoft’s Hamilton Dock. But there would be opportunities for boats of 20m-25m after withdrawal from the CFP.

“As other speakers have already clearly stated, it is imperative that the government makes a clear commitment that the hugely important and valuable opportunity Brexit represents will not be traded away.”

“We built our building eight years ago at a cost of £2.5m, yet it may close because we don’t have enough fish. It once employed 130 people, but now less than 40 and decreasing.”

His working day used to involve exporting local fish to Europe, the Middle East and Australia.

“Now it’s spent on health and safety compliance, teaching filleters of over 40 years’ experience to pick the knife up by the handle and not the blade. And that’s true.”

Most of his fresh fish comes from Iceland and Norway, but he also buys plaice landed in Holland on British licences, some of those originally Lowestoft vessels.

“We need UK quota to be landed in UK ports. Younger fishermen have gone to the wind farm sector because of the uncertainty of fishing. Without fish, processors will cease to be. The humble herring used to be a huge export. With good investment and marketing and equipment, we could turn it into a value-added product once again.”

There are ready-made markets, he said: seabass to Dubai, spurdog to London and Italy. Brexit could reverse this decline – fishing grounds exclusive for the UK out to 200 miles, to give confidence to invest in training and infrastructure. There has to be local autonomy and a better deal for the U10s so that coastal communities can thrive. Fishing is a sustainable resource and will be there long after the last oil-rig has gone. It must not be traded off again. 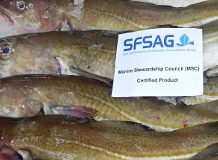