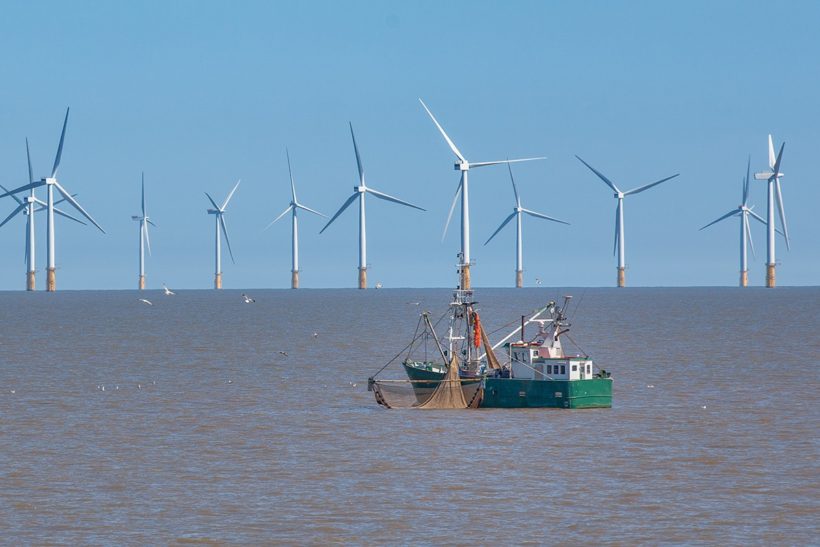 The Crown Estate Scotland confirmed last week the outcome of its application process for ScotWind Leasing, the first Scottish offshore wind leasing round in over a decade, and the first ever since the management of offshore wind rights were devolved to Scotland, reports Andy Read.

Seventeen projects have been selected, from a total of 74 applications. These have now been offered option agreements that reserve the rights to specific areas of seabed as illustrated on the map below, covering an area of 7,000km2, mainly to the north and east of Scotland, taken from the larger 8,500km2 area made available for bidders and highlighted in the Scotland Marine Plan. 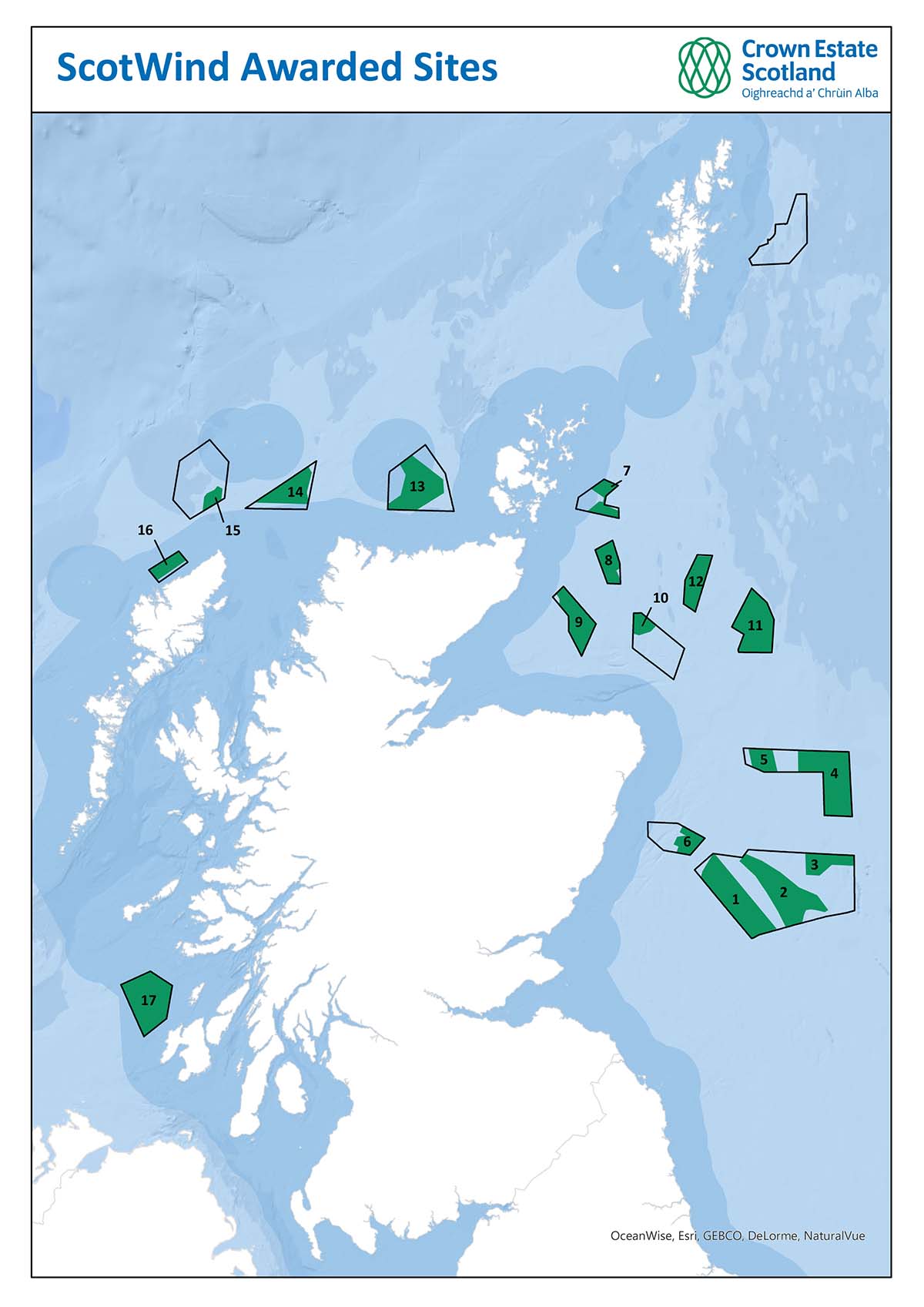 The option areas for the 17 projects selected in the new leasing round.

As such, this announcement has not come as a complete surprise to the fishing industry, though the scale of the proposed developments has shocked some.

The auction is likely to prove very lucrative, with an expected £700m to be generated in options fees, presaging a subsequent multi-billion-pound investment over the next few years. Any of the 17 selected developments that do not proceed will be replaced by applicants who scored lower down the list of 74 received.

Given the profitability of offshore wind developments, the current crisis in energy supply, and targets agreed at COP26 in Glasgow in November, it is widely expected that all approved projects will become a reality as the development process proceeds.

The new generation of wind turbines, much larger in size than the current generation, are expected to generate as much as 14MW per turbine within the next decade, a huge step up from the initial installations in UK waters that slowly increased up to 3MW.

Responding to Crown Estate Scotland’s announcement on the ScotWind offshore wind leasing round, Elspeth Macdonald, chief executive of the SFF, said: “While it is clear that substantial additional offshore renewables will be required for Scotland to meet its net-zero target, we are understandably anxious and concerned about the potential impact of these and future offshore renewables projects on the Scottish fishing industry.

“The 17 projects announced today by Crown Estate Scotland have been offered option agreements which reserve the rights to specific areas of seabed amounting to in excess of 7,000km2. This is a vast area, and the majority of the successful projects are for floating offshore wind, which creates even greater spatial and co-existence problems for fishing than fixed turbines do.

“Through the SFF and its constituent associations, the industry has always sought to engage constructively with offshore developers, and will continue to do so.

“However, it needs to be recognised at the highest levels within the renewables industry and in Scottish government that catching fish is already a climate-smart industry that produces nutritious, high- protein food with an extremely low carbon footprint. It is also an industry that supports many jobs and businesses ashore, and is vital to Scotland’s coastal communities.

“In the rush to energy transition, it is vital that our industry’s voice is properly heard, and that the fleet’s access to Scotland’s productive fishing grounds is protected.

“In particular, proper scrutiny must be given to developers’ claims that offshore wind farms and fishing activity can co-exist with little change to existing patterns of activity, since our experience to date shows very strongly that the opposite is the case. Fish are not uniformly distributed in our seas – the fleet cannot simply move somewhere else.

“We need genuine and meaningful engagement, mutual respect and an even-handed approach to planning, consenting and licensing. Marine renewables are clearly part of Scotland’s transition to net zero, but so is fishing. For this to be a just transition, there must be space for both to succeed.”

The Crown Estate confirmed in its statement that the announcement did not provide carte blanche to developers, who will still need to successfully work through the existing consent, financing and planning approvals process that sits elsewhere in the structure of the Scottish government. The fishing industry will have opportunity to engage with the developers at all stages of this process.

However, concerns about the footprints of floating turbines, the burial of cables between turbines, and disruptions to fish populations during construction are bound to intensify. Similarly, the loss to the fishing industry of skilled fishermen, attracted to jobs on service and construction vessels, is likely to continue, exacerbating existing crew shortages in many ports. 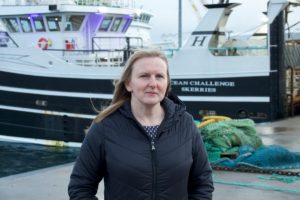 Sheila Keith of the SFA: ‘An immediate sigh of relief’ for Shetland on wind development – for now.

The Shetland Fishermen’s Association (SFA) has emphasised that the interests of the fishing industry need to be at the forefront of consultation before any further round of offshore wind leasing takes place, reports Peter Johnston.

Executive officer Sheila Keith welcomed the fact that a 200 square mile area east of Shetland is not among the slew of areas where developers were offered ‘option agreements’ by ScotWind last week.

But she warned that waters around Shetland were bound to be on the table again, given the advancements in technology that will make offshore developments ever more viable.

The fishing industry was suffering ‘spatial squeeze’ with oil, renewables and protected areas all chipping away at areas traditionally worked by commercial fisheries, she said.

She told Fishing News: “There’s an immediate sigh of relief, probably, from our membership, and we’re happy that it’s not happening on our doorstep on our major fishing grounds.

“Some might eventually have an impact on spawning areas for pelagics.

“We would just appeal to the government that for any next round of development areas, that they actually take heed of the productive fishing industry that has been here for centuries, and will continue to be here way beyond renewables.

“We can hopefully co-exist with anything new, but we should be at the forefront of their minds and not an afterthought, which seems to be the way that they are working just now.”

She said that not all the developments would necessarily go ahead, and that there would be much work to be done with the fishing industry and other stakeholders before anything happens.

Renewables were just one factor eroding the areas that can be fished by local vessels, she said.

“We term it ‘spatial squeeze’. We have constant spatial squeeze from foreign vessels, from wind turbines, from MPAs, from aquaculture – everything seems to be squeezing fishing out, rather than acknowledging fishing is adding so much into the economy. Rather than protecting that, it just doesn’t appear to be at the forefront of officials’ minds.”

Although only 17 of 74 potential developers are being given the option to go ahead, the allocated blocks cover large bodies of water all around the north, east and west of Scotland.

Crown Estate Scotland chief executive Simon Hodge said that the results were a ‘fantastic vote of confidence in Scotland’s ability to transform our energy sector’. 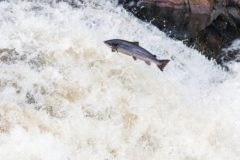 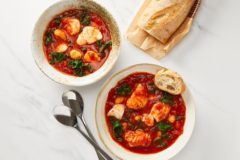 Love Seafood gears up campaign to ‘Bring on Better Living’