Delegates at a recent workshop on pulse gear, held in Amsterdam, heard there had been a change in the distribution of the fleet using pulse gear towards the south east of the North Sea.

Dutch fisheries scientist Adriaan Rijnsdorp said there was resistance from member states to the use of pulse gear.

There were also control and enforcement issues, and insufficient exposure of the research that had been, and is being, carried out.

He said research into how stakeholders perceive pulse trawling showed there were ‘worries and discontent about the process through which the Dutch government obtained increasing number of derogations’, and the transparency of the process.

Details of the relative costs and benefits of pulse and conventional beam trawling were spelled out at the workshop.

The use of electricity for fishing is banned in the EU, but since 2007 5% of the beam trawl fleet of all member states has had temporary dispensation to fish using electrical methods in the southern North Sea.

A few Dutch vessels began using pulse trawling in 2009 and 42 Dutch vessels were given a dispensation in 2013, followed by another 42 last year.

Nathalie Stein, Head of Fisheries at the Dutch research institute IMARES, said industry representatives did not expect all the 2014 dispensations to be taken up because of heavy investment costs and lack of sole quota to meet the greater sole-catching capacity of pulse fishing.

“The sole quotas for the Netherlands are too low at present to allow all flatfish vessels to fish sole with pulse technology,” she told delegates.

In 2012, fuel consumption was on average 45% lower in pulse trawling than in beam trawling.

Towing speed when pulse trawling is usually one nautical mile per hour slower than with beam trawling, and the equipment is lighter, causing less disturbance on the seabed as well as saving fuel.

Unwanted by-catch is lower for pulse trawling than for beam trawling.

Fewer undersized plaice are caught per hour and numbers of discarded benthos are lower.

Fewer fish are caught with pulse trawling than with beam trawling but the composition of the catch varies widely.

The greatest difference is in the proportion of sole to plaice – in pulse trawling sole accounts for 34% of the landings compared with 12% in beam trawling (Table 1).

Catch samples from 25 pulse trawlers in 2012 showed many differences between vessels, seasons, and areas.

But on average, 31% of the catch was landed species, 10% were undersized plaice and sole, 7% were miscellaneous fish discards, 18% benthos, and 34% dead and inanimate material.

The electric current can affect all the fauna that come into contact with it, but these effects differ according to conditions and species.

The pulse trawl is lighter than the traditional beam trawl, so it does not penetrate as deeply into the seabed.

In addition, as the fishing speed of pulse trawlers is slower, the trawled distance per hour is shorter and the overall fished surface is smaller.

Laboratory testing revealed that pulse trawling has only minor effects on the mortality of different benthic species.

Trials at sea have shown that pulse trawlers inflict less injury on the fish they catch than traditional beam trawlers.

The superior quality of the fish caught by pulse trawling might enhance the survival chances of plaice and sole, but this theory is still to be researched.

Delegates heard that trials in the Wadden Sea, in 2013, showed there was ‘huge potential’ for the use of pulse beaming for shrimps. The catch of commercial-sized shrimp increased 2% compared with conventional gear while catches of small shrimp and fish/benthos were down 21% and 66% respectively.

Drag resistance was reduced by 23% and seabed contact reduced by 60%.

Trials are also due to take place with twin-rig gear using pulse techniques. 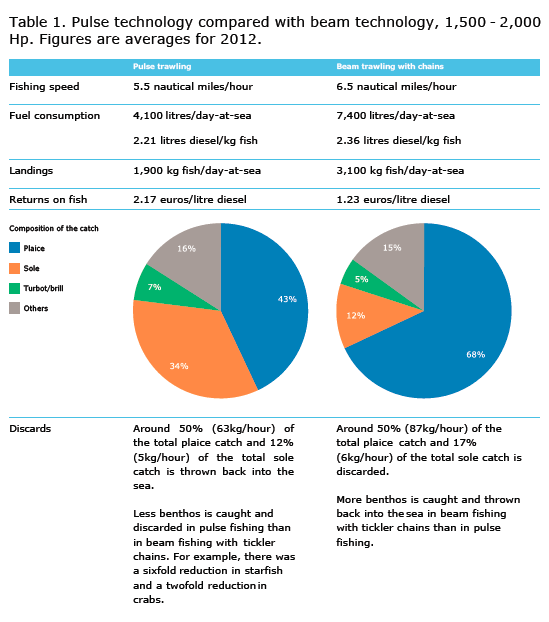 Pulse fleet has ‘hammered hell’ out of Thames sole

Jerry Percy, executive director of Low Impact Fishers of Europe (LIFE), who attended the Amsterdam workshop, claims around 100 vessels were using the system, which was supposed to have been only a two-year research project involving a few vessels.

He told Fishing News: “The problem is that on paper, pulse fishing is potentially a greener alternative to conventional beaming because it has a much lower impact on the seabed and uses much less fuel.

“At the same time, it’s also very efficient – catches are up to three times more for sole on soft ground, where conventional beamers can’t work.

“It ticks a lot of boxes for fisheries managers and beam trawler owners, who were coming under increasing pressure due to habitat and by-catch impacts – the problem is that there has been no effective research undertaken, and the use of Article 14 [pilot projects] under the CFP has allowed a far higher number of vessels to use the method without proper research being undertaken beforehand.”

The Dutch government originally approached the Commission to ask for permission to allow 5% of the Dutch beam trawl fleet to use pulse fishing experimentally in a two-year research project.

But no genuine research was done in terms of carrying out trials alongside control fishing using comparative methods.

Article 14 of the CFP states that pilot projects can be undertaken in support of ways to cope with the landings obligation – and that was used to get more and more beamers using the method, said Jerry Percy.

“While it has potential for fishermen, there has been no proper research and history is littered with cases where people have said ‘it’ll be all right on the night’ – and then it wasn’t.

“Inshore fishermen in the south east have found extensive evidence of damage to fish; burn marks on flatfish, thought to have come from the electrodes, and cod with broken backs after the pulse fleet has been in the area, and equal concerns have also been raised by Belgian beam trawler operators.”

One outcome of the workshop was to look at a proper research programme over the next two years – for example, to look at vessels’ VMS data before and after using the gear to see changes in fishing patterns.

“We know that many of the Dutch pulse trawl fleet have moved to the soft ground off the Thames and hammered hell out of the sole stocks there, especially last year when the fish couldn’t go up the river to spawn due to the heavy rains,” said Jerry Percy.

“Pulse fishing must be managed to stop aggregations of the whole fleet in small areas and while it’s too late to stop the method being used, it is absolutely vital that meaningful and effective research is carried out urgently.”

Check out more from our commercial fishing news section… 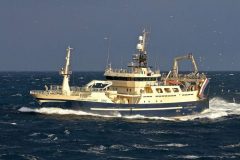 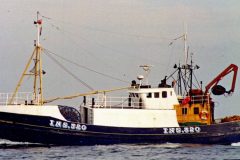