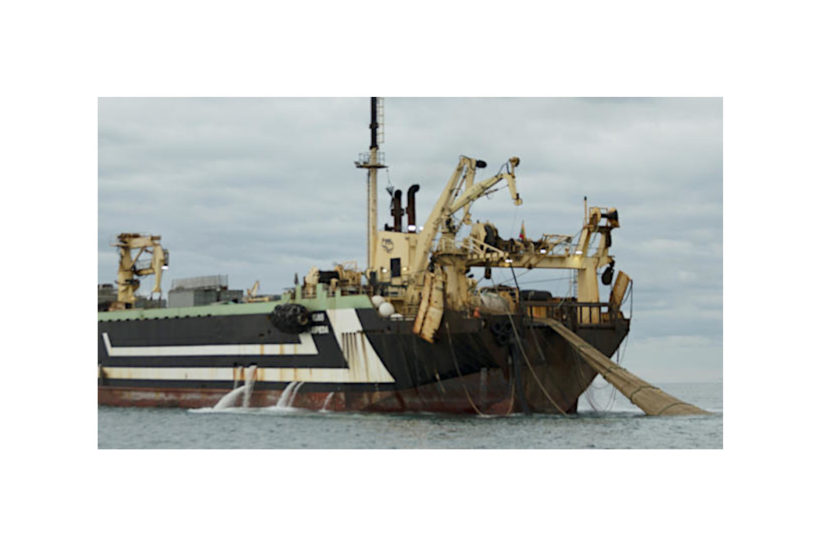 Fishing by large foreign-owned pelagic supertrawlers over 100m in length in UK Marine Protected Areas (MPAs) has rocketed this year and has been increasing significantly since 2017, according to a Greenpeace investigation, reports Tim Oliver.

Greenpeace says its investigations have shown that in the first six months of 2020, supertrawlers almost doubled their fishing time in UK MPAs compared to the whole of 2019.

Supertrawler operations in the UK’s protected areas have risen significantly every year since 2017, says Greenpeace. In 2017, such vessels spent just 475 hours fishing in UK protected areas, compared to 5,590 hours in 2020. All the MPAs where the vessels were operating are outside the UK 12-mile limit.

Twenty-three supertrawlers have been operating in UK waters in 2020 so far, and none are UK-owned. Some are owned by EU operators and some by non-EU operators, the majority of the latter Russian. All are operating legally.

Greenpeace investigators used AIS tracking data from Lloyd’s List Maritime Intelligence for all trawlers over 100m in operation in UK waters to assess how long they spent fishing in MPAs.

There is speculation that the increase is due to vessels staking their claim to fish in UK waters ahead of Brexit.

Chris Thorne, an oceans campaigner at Greenpeace UK, said: “Our government cannot continue to allow supertrawlers to fish with ever-increasing intensity in parts of our waters that are supposed to be protected. It must step in and put a stop to industrial supertrawler operations within our offshore marine protected areas – something which will be possible after Britain leaves the Common Fisheries Policy.

“Our government allowing destructive supertrawlers to fish for thousands of hours every year in MPAs makes a mockery of the word ‘protected’.”

Greenpeace says that a ban on supertrawlers operating in UK MPAs should be the first step towards designating a network of fully or highly protected marine areas. These, it says, should cover at least 30% of the UK’s waters by 2030, to bring the UK in line with the ‘30 x 30’ target of having 30% of the world’s oceans fully protected by 2030.

“After a decade of political division, our call cutting across the political divide should send a firm message to the government that enough is enough. Supertrawlers must be banned from our protected areas.”

The EU supertrawlers that spent the most time fishing in MPAs were the Willem van der Zwan, Maartje Theodora, Annelies Ilena and Margiris – ‘the four biggest supertrawlers on earth’, according to Greenpeace.

The Wyville Thomson Ridge was overwhelmingly the worst affected MPA because of the concentration of the Russian supertrawler fleet’s activity in the region.

A DEFRA spokesperson said: “The UK is a global leader in the fight to protect our seas with our ‘Blue Belt’ of protected waters nearly twice the size of England.

“The Common Fisheries Policy currently restricts our ability to implement tougher protection, but leaving the EU and taking back control of our waters as an independent coastal state means we can introduce stronger measures.” 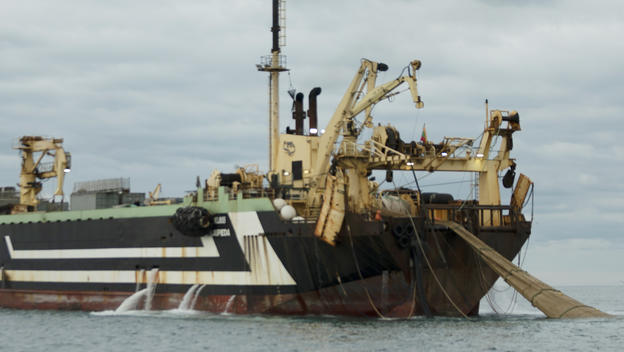 The Lithuanian-registered supertrawler Margiris, seen fishing in the English Channel in October 2019, is ‘one of the four biggest supertrawlers on earth,’ says Greenpeace. (Photo: Greenpeace)

NUTFA director Jerry Percy said it was likely that the explosion in effort by the foreign supertrawlers was due to vessels building up a track record of fishing in UK waters. to support claims for continued access in a post-Brexit fisheries agreement.

He said the massive vessels were fishing without any control or enforcement over what they caught, and that only their flag state could force them to carry and monitor the onboard cameras that were the only way to control their catches and by-catches of unwanted species.

“It’s a fundamental nonsense that we’ve got vessels with this huge power and capacity fishing in our waters effectively unregulated, yet fishery officers are waiting to check under-10m boats when they land to see if they’ve got a bass hidden in the engineroom – it’s a farce.

“I wrote to the MMO in October 2018 to complain about these vessels fishing in the Channel, but nothing has changed in the meantime, not one iota.

“They are legally permitted to fish in the area for pelagic species such as horse mackerel, and it beggars belief that they are not catching bass when they are fishing exactly the same areas where many small bass boats made a living before being banned by the MMO.

“The UK pelagic fleet was previously banned from fishing for bass in the South West Approaches on the basis of a by-catch of dolphins, and the south coast small-boat fleet was banned from drift-netting for bass in exactly the same areas as these boats are fishing in order to let the stocks recover.”

Jerry Percy said that the vessels claimed to have a zero by-catch of cetaceans, but this was not credible. “Their passage down the Channel was marked by dead cetaceans washed ashore,” he said.

He added that as well as the supertrawlers’ inevitable by-catches, with the large numbers of such vessels there must be a disruption to the ecosystem, and particularly harmful effects on feed fish.

“Where is the benefit to the UK from these boats fishing in our waters?” he asked.

He compared the ‘immense’ gear the foreign supertrawlers are allowed to use with the ‘enthusiastic enforcement of a wide range of regulations and restrictions’ imposed on small-scale UK inshore fishermen, and the ‘seemingly low level of inspections on these megaboats’.