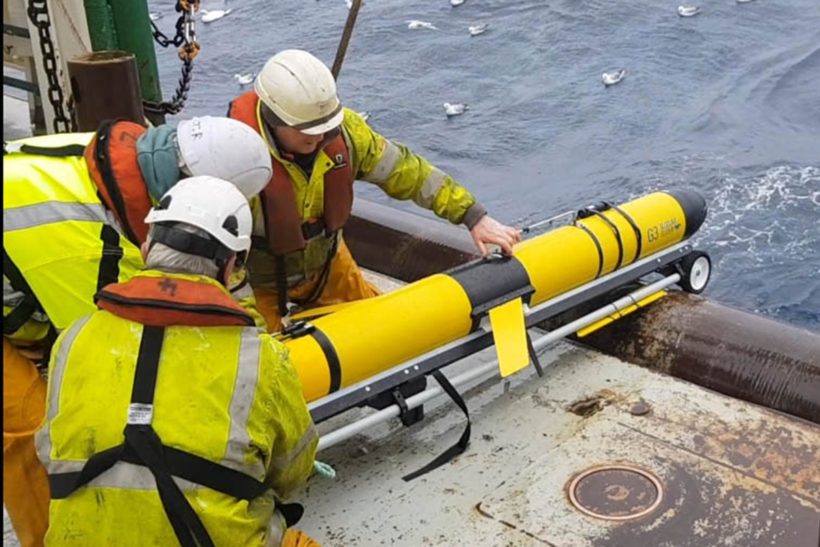 The ability to track free-swimming salmon juveniles has been extended hundreds of kilometres into the open ocean using advanced robotic technology.

As part of the EU INTERREG VA-funded SeaMonitor project, Dr Ross O’Neill of the Marine Institute and Kieran Adlum of P&O Maritime tested a remotely operated ‘ocean glider’, equipped with an acoustic tag detector, along the steeply sloping area of the shelf edge approximately 130km northwest of the Scottish Hebrides. The ocean glider was deployed from the RV Celtic Explorer on 16 April during the 2021 Irish Anglerfish and Megrim Survey.

These fish had been tagged between four and six weeks previously with electronic acoustic transmitting tags, along with hundreds of other juvenile salmon, as part of the SeaMonitor project but also as part of the West Coast Tracking Project, a partnership between the Atlantic Salmon Trust, Fisheries Management Scotland and Marine Scotland, the EU INTERREG VA-funded COMPASS project and Agri-Food Biosciences Institute research initiatives. One of the main aims of these projects is to investigate the persistent low marine survival of Atlantic salmon in the early stages of their oceanic migration to feeding grounds in the North Atlantic.

The four fish originated from the river Burrishoole in Co Mayo, the river Bann in Northern Ireland and the rivers Clyde and Awe in Scotland. 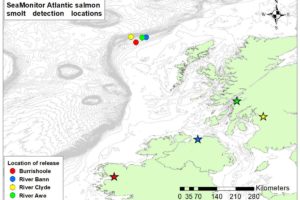 Up to now, most tracking studies had been limited to estuarine or coastal areas due to technology limitations and the need for stationary receivers.

According to Dr Niall Ó Maoiléidigh of the Marine Institute, principal investigator
for the SeaMonitor project: “The detection of these fish confirms the importance of the shelf edge in this amazing journey, as the faster currents associated with the steep slopes most likely act as an aquatic transport system, facilitating the northward migration of these tiny fish through a very harsh environment.”

“The use of the glider to track the movements of even very small fish has been clearly demonstrated, and this will encourage the use of autonomous underwater vehicles to improve information on many marine species of animals that may be endangered or threatened, without interfering with their natural migrations,” said Dr Ciaran Kelly, director of fisheries ecosystems and advisory services at the Marine Institute.

Gina McIntyre, chief executive of the Special EU Programmes Body, said: “Our shared marine environment is under threat, with many species, such as Atlantic salmon, being endangered. The research that is funded by the INTERREG VA Programme

is being undertaken by the SeaMonitor project and will provide invaluable data that can be used to gain a better understanding of the migratory patterns of Atlantic Salmon and what is potentially disrupting them. This research will inform future environmental protection efforts on both sides of the border, and is a testament to the partnership-based approach which underpins the INTERREG VA Programme.”

Its use will be extended to track cetaceans, basking sharks and skates, and collect physical oceanographic data. When combined, the data will enable
a holistic view of the region’s mobile marine species, and will prove invaluable to the region’s managers, as well as establishing an integrated network of marine receivers for future applications and extended monitoring. 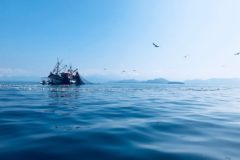 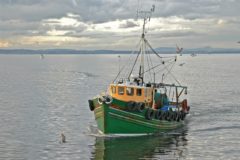