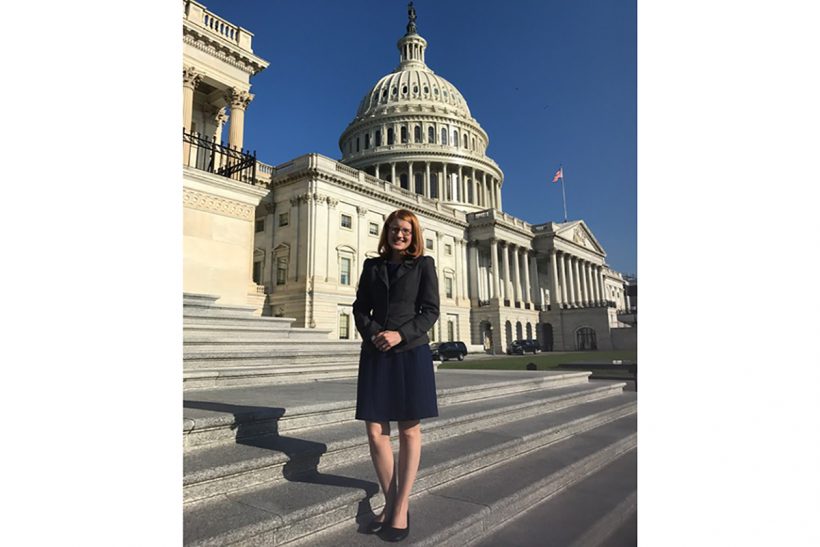 What lessons can we learn from the Americans on fishing?

Holly Lynch, Shadow Fishing Minister, has just returned from a trip to the USA, and has blogged about her experiences.

Above: Holly outside the Capitol Building.

Earlier this week, I went to Washington with a delegation of MPs as part of the British American Parliamentary Group exchange. We have been meeting with Congressmen and women who have worked on similar campaigns and have similar policy interests, in order to share our experiences about what works and doesn’t work in our respective parliamentary systems.

I informed the State Department, who organised the trip, that I was keen to use the opportunity to meet with elected representatives, and advisors in Congress, who had either recreational or commercial fishing in their districts.

With Brexit forcing us to re-evaluate our fisheries policy, I was keen to understand how North America balances environmental sustainability with commercial fishing. No small feat, when you consider that national quotas are agreed at a Federal level and set by the eight regional fishery management councils, yet individual States have a big say in how they implement those quotas. How does that work in practice, and how is it enforced?

All the elected representatives I met were keen to stress to me that the so-called ‘Blue Economy’ is something that is taken incredibly seriously in all coastal States.

I first met with Congresswoman Colleen Hanabusa, who represents Hawaii. As a collection of islands, fishing has long been an integral part of the food supply and economy in Hawaii. The Congresswoman was keen to point out that the islands’ people have long had to find ways of working together to find the balance between providing for their families and protecting all that lives within Hawaii’s waters.

However, after three miles the Coastguard is responsible for enforcing fisheries policy and ensuring fishing vessels are within the Federal quotas and international agreements. The Coastguard in America is a branch of the Military and funded by the Department of Defence. 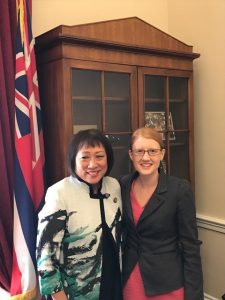 I then met with Congressman Derek Kilmer, who represents Washington State’s 6th District. Fishing is a significant part of the local economy in his district, but when his community was affected by a particularly tough fishing season, he managed to secure a $20m support package from the Federal Government in order to mitigate the impact this had on his coastal communities.

Part of the reason for a decline in the numbers of fish caught off the coast of Washington is a phenomenon known as ‘the blob’, which is a patch of unusually warm water in the Pacific Ocean. The increased temperatures, which were first detected in 2013, have adversely affected marine life, disrupting whole ecosystems between Hawaii and the mainland. These warmer waters are nutrient-poor, bringing about significant reductions in plankton, with a knock-on effect all the way up the food chain, decimating some species of fish, and pushing others out of those waters.

In responding to the problem, Congressman Kilmer got Congress to support a Disaster Declaration, which unlocked additional funding. We also discussed his efforts to look at a type of business-interruption insurance for the fishing industry, similar to the scheme in place to protect farmers whose crops fail. It is an interesting idea, and one we have agreed to share information on as we both explore that possibility in our own countries.

The trip also involved shadowing a Representative in their own district, and so I visited Chicago to shadow Democratic Congressman Danny Davis. At the foot of Lake Michigan, Chicago is the third biggest city in North America.

I was keen to learn more about internal fishing in Lake Michigan. Congressman Davis explained to me that one of the biggest challenges was seeking to keep an invasive species of Asian Carp from entering Lake Michigan. Asian Carp eat massive amounts of plankton and so starve other species of fish of this source of nutrients. Having wreaked havoc in the Illinois River, concerted efforts have been made to thin the population and keep it from entering the Great Lakes.

The Congressman has been involved in campaigns to try and create an appetite for Asian Carp, as commercially fishing it would be one way to keep the species under control. Despite chefs and environmental groups from his district preparing and serving Asian Carp on Capitol Hill, so far, Asian Carp hasn’t caught on in Chicago’s cafes and restaurants.

The final two days of the trip was spent in Boston, Massachusetts where fishing and seafood is a big part of their identity, local economy and tourist offering. The New Bedford Port in Massachusetts is America’s biggest fishing port, with fish landings valued at $369m every year.

An elected representative to the State House of Representatives in Massachusetts informed me that failures to fish sustainably in and around the Boston area was now becoming a real problem, with some species, such as cod, having been worryingly overfished. In order to continue supplying the amount of seafood served by the East coast’s many sea front restaurants, more and more fish is now having to be imported from other parts of America and beyond. Despite its vast coastlines, America still imports more fish than any other country in the world.

This challenge has brought significant investment in ‘Aquaculture’ or ‘Aquafarming’.

Ongoing advances in technology and farming practices mean that aquaculture is a rapidly developing area, with implications for both the restoration of fish stocks and commercial fishing.

It was a fascinating trip, and incredibly helpful in taking a much closer look at some of the fisheries issues facing the US, to see what positive ideas we could adopt, and what mistakes we might learn from, ahead of the upcoming Fisheries Bill and Brexit negotiations. 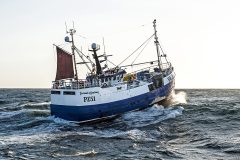 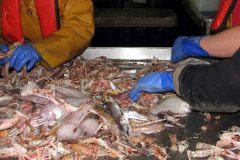