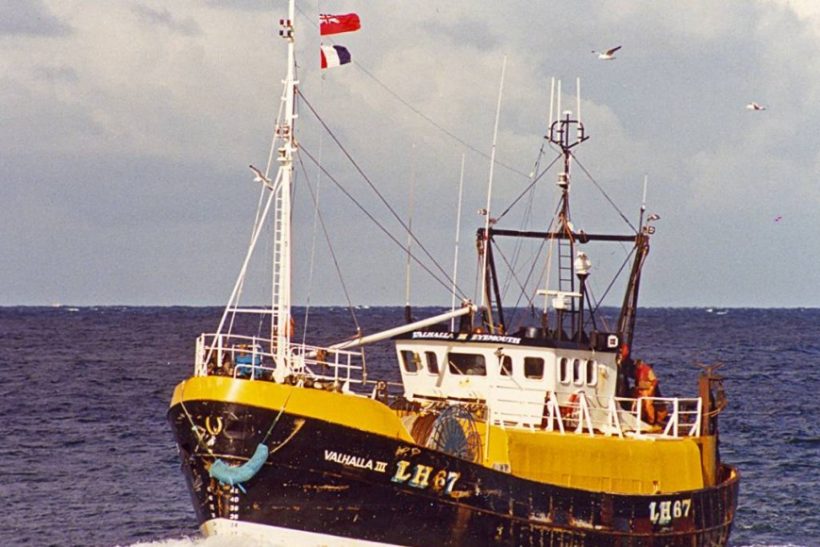 Featuring a distinctive yellow whaleback and deck shelter, the Eyemouth-based seiner Valhalla II was launched at Campbeltown Shipyard in 1982. One of the successful Campbeltown 80 design of cruiser-sterned seiners, Valhalla III was powered by a 575hp Callesen engine and built to replace Coldingham Skipper Robert Veitch’s previous command, Valhalla II LH 76. Valhalla II had been built in 1972 by George Thomson & Sons of Buckie as the Boy Andrew WK 172, for Norrie Bremner, and returned to Wick as the Crusader WK 172 under Skipper Donald MacKay.

When Robert Veitch bought the Campbeltown 87 seiner/trawler Brereton INS 97 in 1989, which became Valhalla IV LH 184, Valhalla III was renamed Fisher Rose II LH 67 by Robert Clark of Musselburgh. In 1999 Fisher Rose II moved to Fraserburgh on being bought by Michael Clark, to become Fisher Rose FR 896, which was then converted for twin-rig trawling prior to being decommissioned in 2002. 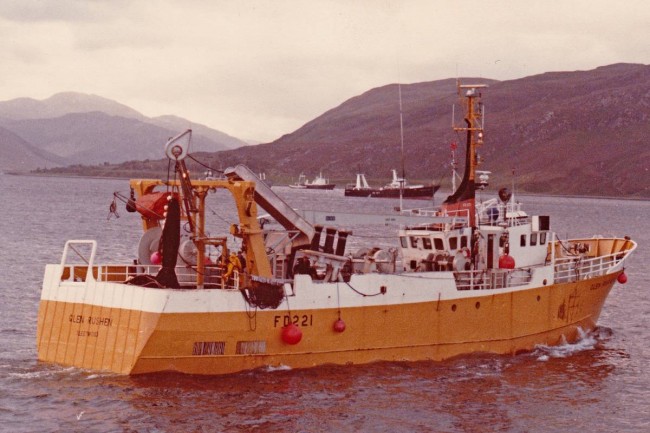 Glen Rushen was converted into a multi-purpose purse seiner/trawler by Karmøy at Kopervik, Norway in 1979 when a shelterdeck and three RSW tanks were fitted.

Skippered by Victor Buschini, Glen Rushen was extensively rebuilt by Globe Engineering Ltd at Hull in 1987. This work included fitting new hull sections amidships and on the stern, as the vessel was lengthened by 41ft at the same time as three extra RSW tanks, together with a new 2346hp Stork Werkspoor main engine, were fitted. The most striking change to the vessel’s profile was provided by constructing a new wheelhouse and superstructure aft.

On completion of her big conversion, the pelagic vessel was renamed Omega B FD 221. 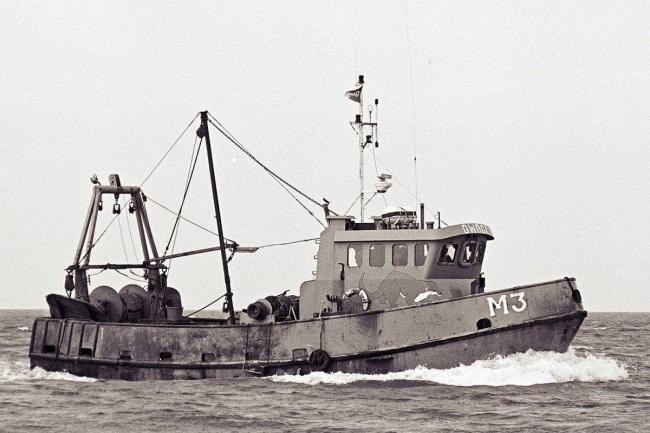 Dwrgi, whose name means ‘otter’ in Welsh and who sported an impressively large painting of an otter on both sides of her wheelhouse, worked the Cardigan Bay grounds scalloping in the winter, moving around to the Bristol Channel to trawl during the summer months. The 52ft x 15ft steel-stern trawler was powered by a 250hp Gardner 8L3B engine. It was originally also equipped with a forward gantry and derricks for beam trawling, although these were soon removed. In early 1998 Dwrgi was sold to Brixham skipper Dave Becconsall, where she was re-registered as BM 19 and her name altered to the English version, Sea Otter.

On arrival in Brixham, Sea Otter was again equipped for beaming using a mid-ships gantry and derricks. Four years later, in 2002, Dave Becconsall re-engined the boat, installing a Daewoo MD196Ti, developing 300hp. The following year, Sea Otter left Brixham after being sold to Scott Trawlers Ltd of Peterhead, subsequently acquiring a Dumfries registration, DS 7 and maroon livery – both distinctive features of the company’s boats. During this time, the boat was also shortened slightly, re-shaping her bow to bring her under 15m in length.

After two years working for the Scottish company, mainly scalloping around the southwest coast, Sea Otter returned to Brixham, purchased by Leslie Kittle to replace his Irish-built wooden trawler, Mourne Lass, which had been de-registered. Mourne Lass’s BM 222 number was then transferred to Sea Otter which, since 2005, has remained based in Brixham working as a day boat, single rig trawling in winter and scalloping in summer, when she sometimes moves around the coast to Plymouth. 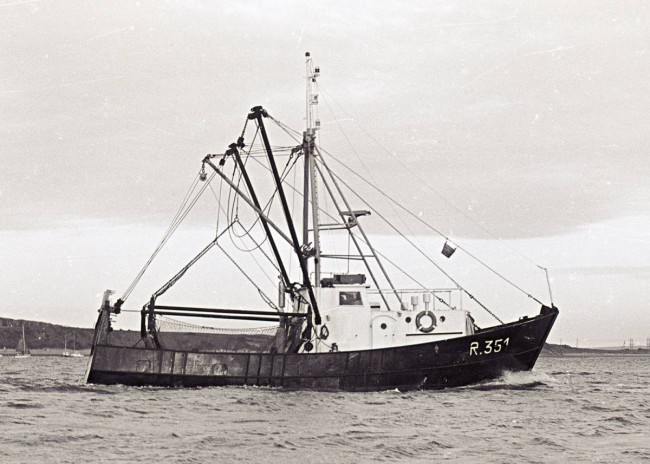 Built for Oostende owner Deley Eduard-Pintelon in 1968, Livine was a product of the well-known De Graeve shipyard of Zeebrugge, Belgium, and was originally named Irma O 351.

Irma was a 55ft long transom-sterned steel beam trawler of a style popular in Belgium at the time. The forward wheelhouse and mess deck housed a built-in winch, with a tall midships beaming gantry and associated derricks also built into the wheelhouse. A low goalpost gantry was also built into the stern. Originally powered by an ABC engine developing 200hp, Irma was renamed Livine in 1970, then re-engined with a slightly more powerful 240hp Mercedes Benz engine the following year.

In early 1973, Livine came to the UK, registered in Ramsgate as R 351 under the ownership of Anglesey skipper Robert Crane, who used her for beam trawling and scalloping from Holyhead and Fleetwood. Coming to the south coast in 1978, Livine was sold to Brixham skipper Malcolm Cooke, who re-engined her again, this time with a 240hp Caterpillar engine.

Initially working mainly from Brixham as a trawler and scalloper, Livine had a close shave in 1982 when Joanna C, another local scalloper, fouled a mine which exploded in deep water, leaving both boats with minor damage. Later, Livine concentrated on beam trawling, often working from Padstow. In July 1986, she was sold to another Oostende skipper, Frank Desmit, and returned to her port of origin where she was re-named Natacha O 191. In March 2000, the boat was sold again within Oostende and continues to work from the Belgian port as a shrimp beamer, now operating under the name Aran O 152. 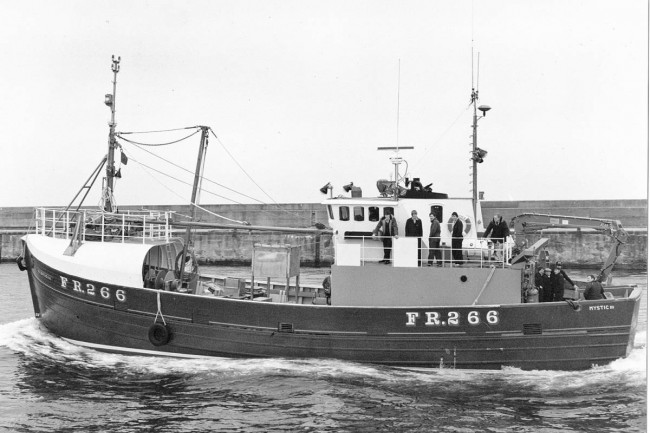 After being shelterdecked and rigged solely for whitefish trawling, Mystic was renamed Cassiopea BF 200 by James West of Gardenstown. Cassiopea was renamed Mystic FR 195 by new owners Alex and Charles West of Cairnbulg in the late ‘80s, initially pair-trawling with Majestic FR 194. After being converted for the twin-rig, Mystic was sold to Peterhead where Skipper Kevin Stephen changed the trawler’s name to Atlantic Star PD 322. In 1999 Bill Price of Balbriggan took the trawler to Howth, where she was re-registered DA 28. Powered by a 536hp Kelvin engine, Atlantic Star twin-rigged for prawns on the Irish Sea grounds and south to The Smalls for the next six years, before being decommissioned in 2005. 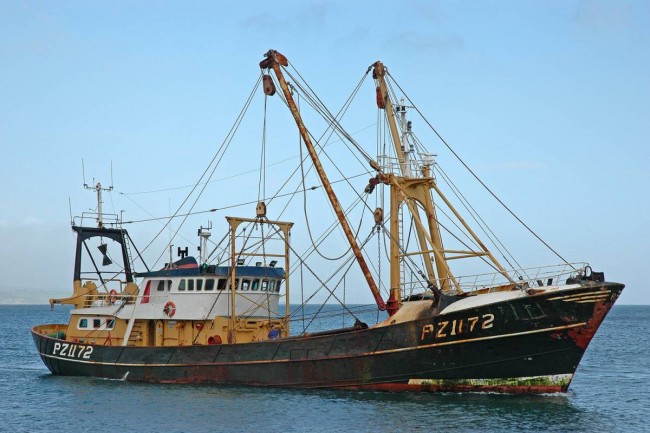 At 128ft the Newlyn beamer Daisy Christiane has the distinction of being the biggest UK vessel to be decommissioned as part of the sole recovery programme. Daisy Christiane was built by Scheepswerf Haak at Zaandam in 1975 as the beam trawler Anna Margaretha TX-66 for Willem Boom of Oudeschild, on the island of Texel. With an LOA of 110ft, Anna Margaretha was fitted with a Stork Werkspoor 1490hp main engine. After fishing from Texel for the next seven years, the beam trawler was cut in half and lengthened by 18ft in 1982. Two years later Anna Margaretha was sold to Brixham, where the beamer was renamed Daisy Christiane BM 33 by Quentin Rae. After arriving at Brixham Daisy Christiane fished with four 7m beam trawls, two attached to each 14-metre beam. These were later changed for a more conventional arrangement of two 12-metre long beam trawlers. When Len Featherstone from Hull replaced John Hingley as skipper, Daisy Christiane regularly fished North Sea grounds as well as those in the southwest. William Stevenson & Sons Ltd took the beamer to Newlyn in 1993. Re-registered PZ 1172, Daisy Christiane was skippered by David Hooper of Newlyn until being broken up on Humberside at New Holland. 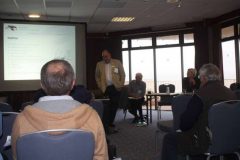 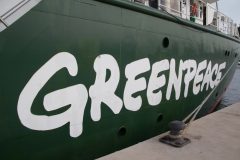