Where are they now? Newlyn’s grand old ladies

Like so many other fishing boats of their immediate post-war generation, these three boats originated from the Ministry of Defence. A large number of wooden boats were built by the Admiralty, initially for war-time use, but they were also intended for entry into the fishing industry once the war had ended, either to replace boats lost during the war or to regenerate the fishing industry after five years of stagnation.

Such was the scale of the Admiralty boat-building programme that many boats had not been used by the time they came up for sale after the war. Tenders were made, and upon sale they left their regional naval bases for owners all over the country.

The three featured boats were all sold by the Admiralty on the same day in 1946, and strangely remained inextricably linked throughout their time as trawlers, until the end of their working lives well into the 21st century.

The 95ft MFV 1570 descended the slipway of her builders, Richards Ironworks of Lowestoft, in 1946, later to embark on a fishing career that was to last just over 70 years.

Sold by the Admiralty in May 1946, to Torbay Trawlers Ltd of Brixham seemingly without ever entering active service for her original owner, and named Agnes Allen BM 21, she was to become part of a large fleet of sidewinder trawlers owned by the company, many of which were also Admiralty-built boats of a similar age. 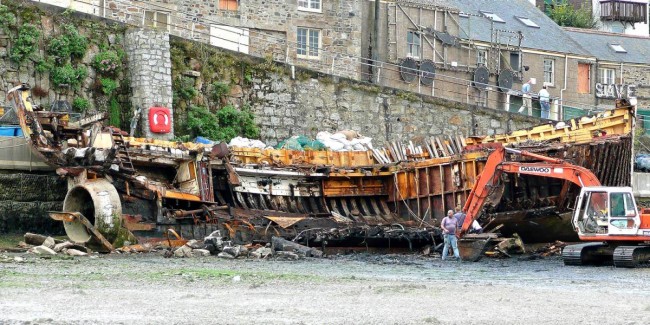 Elizabeth Ann Webster being broken up at Newlyn in 2007.

Agnes Allen was one of three identical Admiralty-built trawlers to be sold by Torbay Trawlers to a Newlyn company, W Stevenson & Sons Ltd in June 1962, where she became Elizabeth Ann Webster PZ 291, a large trawler in a port hitherto better known as a long-lining stronghold.

Continuing her work as a side-winder until the late 1960s, Elizabeth Ann Webster was then taken to the Dartmouth yard of Philip & Sons, where she was converted into a beam trawler; the first beamer in Newlyn and almost certainly the biggest in the UK at the time.

The work entailed the fitting of a new wheelhouse, beam gantry and derricks, a decked-in stern as well as strengthened steel inner bulwarks.

Such was the success of Elizabeth Ann Webster as a beamer that her owners diversified their fleet to this method, building up a sizeable fleet of second-hand Dutch vessels, as well as eventually converting their other two 95ft Admiralty-built boats.

Elizabeth Ann Webster was not to receive a further major rebuild, save for the fitting of a 635hp Poyaud main engine.

The end came for the pioneer of Newlyn beam-trawling in October 2007, when, after a long lay-up, she was towed to a tidal area of the harbour and broken-up, unceremoniously, by diggers.

Also hailing from the famous Richards Ironworks shipyard in Lowestoft in Suffolk, Elizabeth Caroline was built in 1945 as MFV 1568, to the same specification and with the same massive timber work as her sister boats, as well as being powered by the same four-cylinder 240hp Crossley diesel engine, a standard engine that was used throughout the class.

The vessel was sold by tender in May 1946, to Torbay Trawlers Ltd of Brixham, who renamed her David Allen BM 10.

In Brixham she joined several other similar company boats of Admiralty background, side-trawling from the Devon port, and became a mainstay of the fleet in Brixham for the next 12 years.

1962 saw a change of ownership, when Newlyn fleet owners W Stevensons & Sons took David Allen to west Cornwall, where she became Elizabeth Caroline PZ 293, named after her owner’s eldest daughter, and continued in her previous role as a side-trawler, although fishing on harder ground in the western approaches. 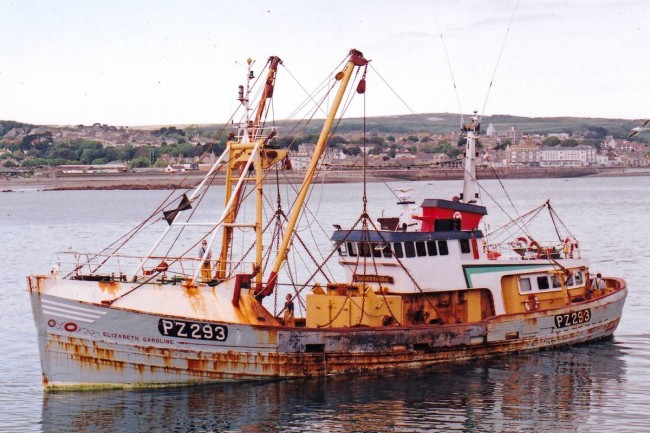 In 1979 Elizabeth Caroline was completely rebuilt and converted into a beam-trawler, following the success in this role of her sister boat, Elizabeth Ann Webster.

Many years of hard work had taken their toll on Elizabeth Caroline’s equipment by the early 1990s, and she was laid up in Newlyn to be refitted by local shipwrights into a more modern-style beamer with a forward beam gantry, enclosed winch and another new wheelhouse, to give her another new lease of life to take her into the 21st century.

The late 2000s had seen time finally catch up with Elizabeth Caroline, and she was laid up in Newlyn with her two sister boats.

In September 2012 she was taken in tow to Exeter for breaking, in company with Marie Claire. However, several years of being laid up had rotted her caulking and she started taking on water badly, before sinking south west of Salcombe. Perhaps a more dignified end than a chainsaw, for such a faithful servant of the South West fishing industry for so many years.

Marie Claire was built as MFV 1546 by Rowhedge Ironworks near Wivenhoe in Essex in 1945, and in common with other boats in her class she was built of oak planking on grown oak frames and measured 97’ in length, with a beam of 22’ 6” and a draught of 11’ 6”. 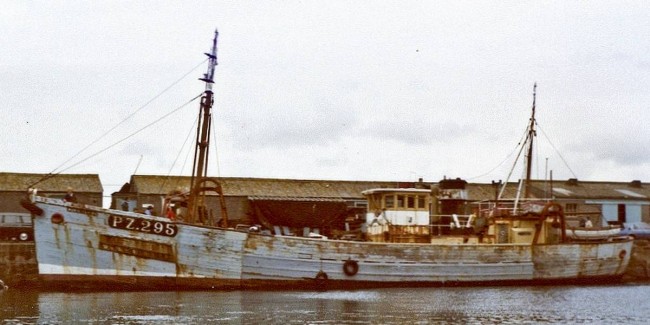 Marie Claire in original form in the 1970s, when rigged for side-trawling…

After the end of the war the unused boat was laid up at Brightlingsea and sold by tender in May 1946, initially to Paignton company Fleetwood Drifters Ltd, before joining another local company, Torbay Trawlers Ltd of Brixham in 1950.

Upon arrival in Devon the boat was renamed Elijah Perrett BM 15.

In Brixham she joined several other similar company boats, side-trawling from the Devon port, and remained a mainstay of the fleet in Brixham for the next 12 years.

In 1962 W Stevensons & Sons bought Elijah Perrett and took her to Newlyn where she was renamed Marie Claire PZ 295 after the daughter of one of owners, Billy Stevenson, and continued to work as a side-trawler from the West Cornwall port.

In the late 1970s, following a main engine failure, Marie Claire was laid up in Newlyn, where she remained as a stripped-out hulk tied up in the centre of the harbour.

At that stage, few could have seen any future for the huge wooden hull but her owner’s vision saw commencement of a complete rebuild project in 1986, largely carried out by local shipwrights, J Peak & Son, with some work completed in Holland by Maaskant.

Completed in late 1988, the boat was transformed into a powerful modern-specification beam-trawler with a Maaskant wheelhouse, Maaskant winch and a 600hp Stork Werkspoor engine. 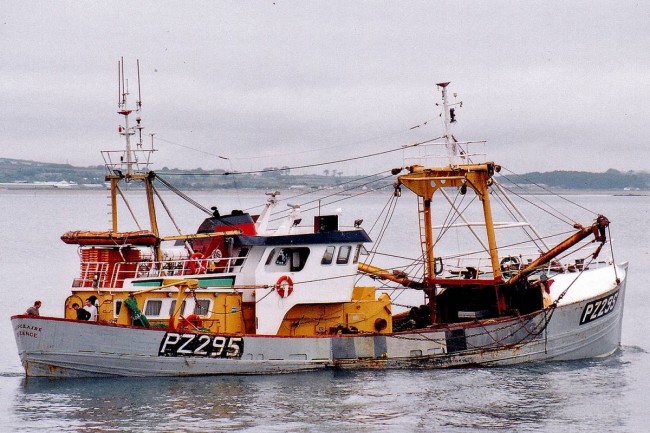 Marie Claire worked very successfully as a beam-trawler from Newlyn, holding the port landing record on occasions. By the late 2000s, time, and increasingly stringent MCA rules, had caught up with the 66-year-old wooden boat and she was again laid up.

Her final journey came in 2012, when she was towed to Exeter for breaking. But this grand old lady wouldn’t go quietly. Stopping overnight in Brixham, mid-tow, Marie Claire sank alongside the fish market and it was another two weeks before she was raised and able to continue on her final journey.

Still showing reluctance, as if knowing her fate, Marie Claire grounded on a sand bank in the river Exe to further delay the inevitable, before eventually being berthed alongside at Exeter Maritime Services in Exeter ship canal where she was broken up. 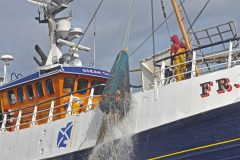 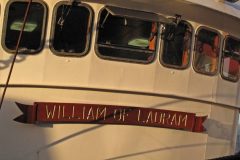