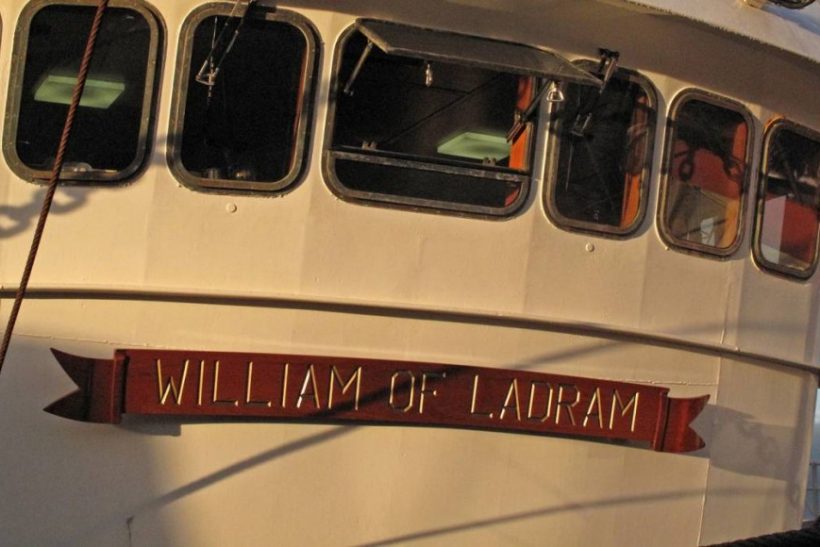 The latest addition to the Brixham fleet, William of Ladram E 33, started fishing from the South Devon port last month.

Now owned by Waterdance, the beam trawler is skippered by Jake Grantham, who was putting the finishing touches to the gear when Fishing News caught up with him.

Above: William of Ladram’s wheelhouse with the new nameplate and the Stellendam swan overlooking the deck.

The 30m beamer was bought from Holland and now becomes part of the fleet managed by Graham Perkes, who sold his vessels to Waterdance earlier this year but is continuing to manage them on the new owners’ behalf. There have been a few changes, with several of the boats sold on, and the William of Ladram added to the fleet. 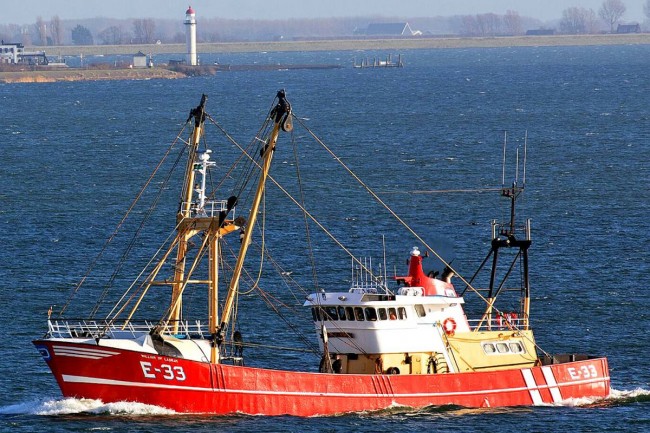 William of Ladram on trials after being drydocked at Padmos in Stellendam.

“Rowan Carter at Waterdance didn’t even see the boat until it had been bought,” Jake Grantham said. “They left it to Graham and me.”

Jake Grantham previously skippered Lady T Emiel, and left the boat some time ago due to the rising cost of fuel, before moving to the Admiral Grenville in Plymouth, and then back to Brixham as the search began for a new boat for Waterdance.

“They wanted a Eurocutter but there weren’t any available at the right price, and then this one came up. It’s in such good condition that it would have been silly not to buy it. We haven’t had to touch anything mechanical at all. It was built with 6mm steel plate and when we drilled into the deck in six places for the survey, to check the steel, it came up as 6mm and 5.90mm. That’s about as original as you can get.”

William Of Ladram was previously the Martha Lena SL-3, owned by the t’Mannetje family. Built at Padmos in 1980, the 30m by 7.30m beam trawler has been in the same family’s ownership for the past 27 years, during which time it went through a major refit in 2000 when the original main engine was replaced with a Wartsila unit. The galley and winch were renewed at the same time and two Mitsubishi generators were fitted. 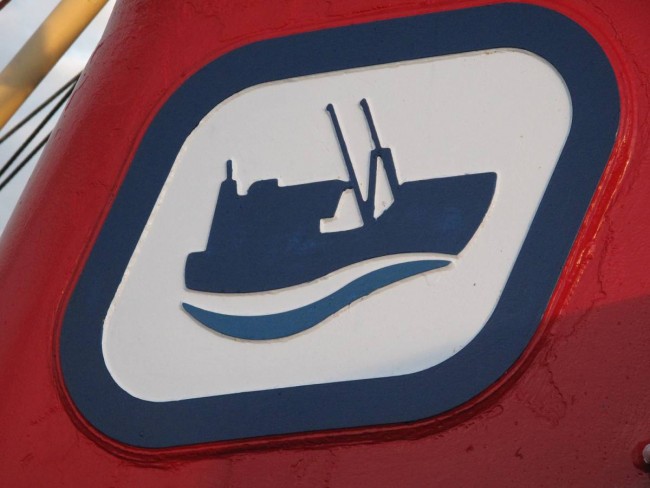 The Padmos logo on William of Ladram’s superstructure.

The t’Mannetje family bought boat in 1987, when it was four years old, and has run it ever since. William of Ladram is the sister vessel to the Glendevron BM 500.

William of Ladram completed its last trip as Martha Lena, landed its fish and was steamed directly to the Padmos yard’s dry dock in Stellendam for a bottom survey, where it was also blasted and painted in its new colours. A few changes have been made as it has been brought under the UK flag, with internet, Sky TV and CCTV systems installed and the wheelhouse updated with Trax and Olex plotters fitted by Tecmarine. As the boat has been brought into the UK under class, detailed surveys had to be carried out and only minor additions were needed to bring it up to today’s UK standards – effectively applying the same standards as would be applied to a new-build.

It has been updated to comply with fire regulations, with new smoke detectors and new fire extinguishers, and, while new wiring was being installed, the opportunity was taken to run cables for CCTV cameras. A new DSC MF/HF radio has also been fitted by Globe Marine to comply with UK requirements. 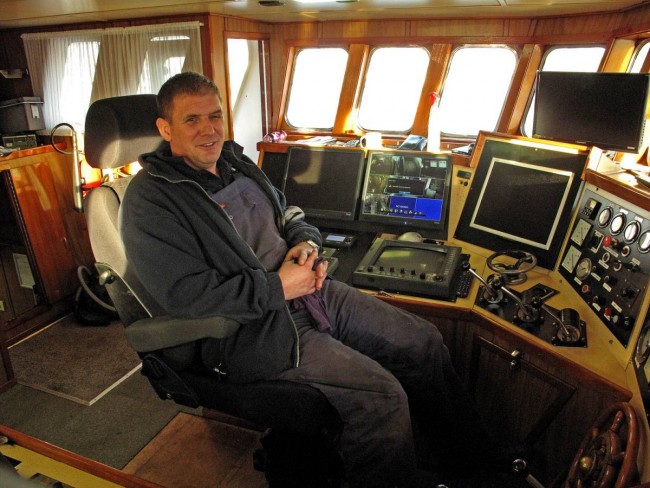 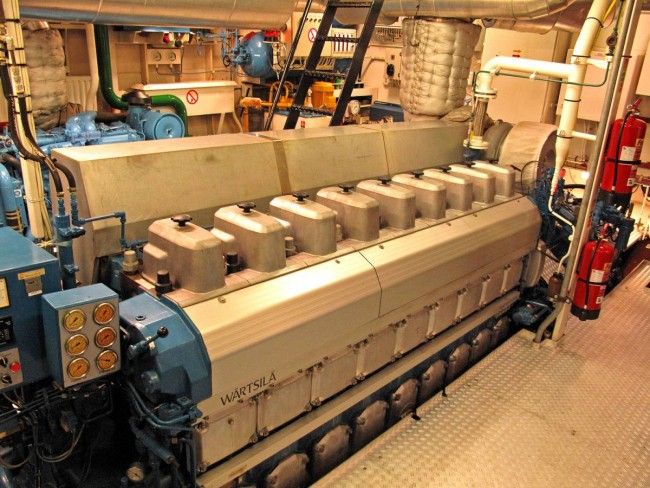 The Wartsila engine, in an immaculate engine room dates back to a refit in 2000. 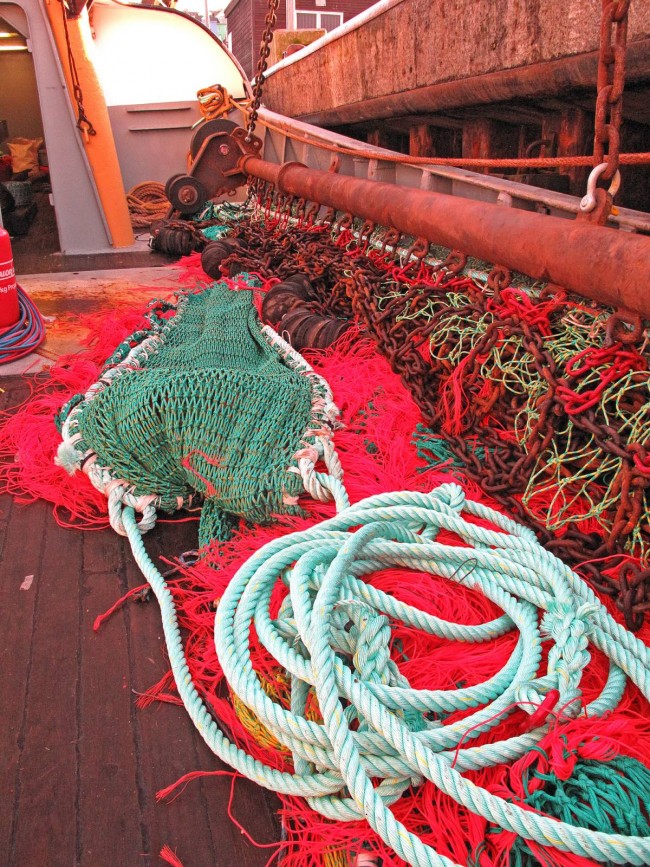 William of Ladram is fishing with 12-metre stone mat gear.

As Martha Lena had been pulse fishing in Holland, the pulse gear was removed during the refit at Padmos, with the two cable winches on the casing aft taken off.

The trawler is in excellent condition and Jake Grantham said that it has been exceptionally well looked after by the previous owners. The engine room is so spotless that you feel you ought to take your shoes off before setting foot down there, and the net store forward is immaculate, as is the rest of the boat.

“There are 12 lockers down in the cabin – and 12 locker keys, and that’s in a boat that’s 30 years old. That tells you everything about how well it has been looked after,” he said. “The boat has a very good service record and it’s a credit to the previous owners that it has been maintained and cared for so well, with looking after the boat being very much a family affair. It helps that the boat hadn’t been laid up, as these boats don’t like to be idle. It went straight to the drydock from its last trip and it came to us practically ready to fish.”

As Martha Lena in Holland, William of Ladram has always worked on the Dutch system of sailing on Sunday night and landing for Friday’s auction, so for its 27 years with the t’Mannetje family, it has worked four days each week – something that will now change as the new owners will be running trips of around eight days. 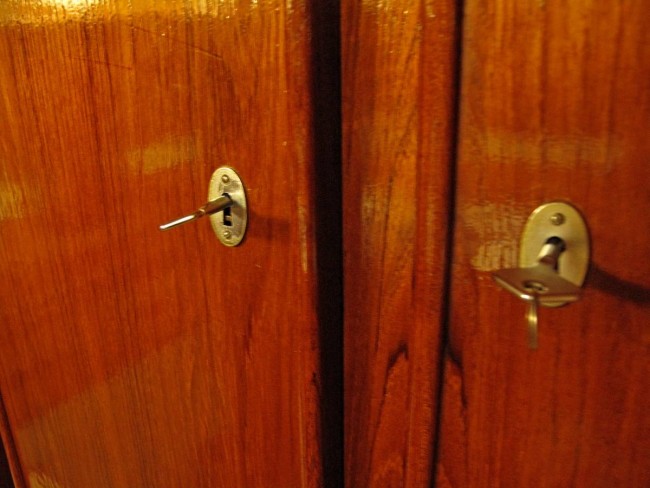 Twelve lockers – 12 keys – is testimony to the extremely high level of care the previous owners gave Martha Lena before the beamer was purchased by Waterdance.

“We’ll be five on board, fishing from Brixham, and I’m expected to stay in VIIe in the south-west approaches,” Jake Grantham said, adding that they intend to stick to beam trawling all year round with 12-metre stone mat gear, and with catches landed to Brixham auction.

“The gear is around four tonnes each side, trawls by Alan Parker and footropes by Draco, who have worked with Graham Perkes for years,” he said, adding that the gear is less complex than it used to be.

“We’ve made some advances. Now we’ll get settled down and fit the flip-ups before we go a bit further west. We’ll be heading that way when it eases off here, but Brixham is our port of landing and we’ll still be landing to Brixham Trawler Agents.

“We’re looking for sole, plaice, turbot and headfish, anything that finds itself in front of the trawls. There was a good cuttlefish season here this year, so we’ll go for cuttle as well. We’ll have to play the markets now, and as this is a bigger trawler, we have the fishroom capacity that the Eurocutters don’t have.” 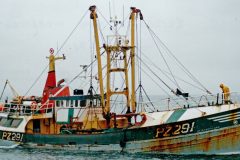 Where are they now? Newlyn’s grand old ladies