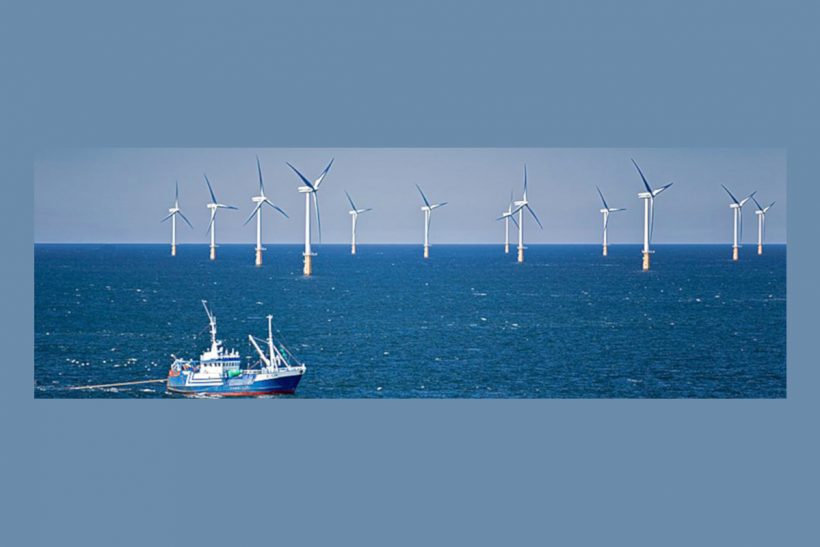 Industry organisations are increasingly alarmed at the accelerating loss of fishing grounds and damage to marine life being caused by the relentless expansion of offshore wind farms in the North, Irish and Baltic seas, reports Tim Oliver

There is also concern that industry involvement in the siting of wind farms is diminishing, and that wind farm operators are increasingly free to decide where they wish to develop sites.

The industry says that this expansion is taking place with no analysis of the huge ecological and economic impacts of these developments, including loss of fishing grounds.

Dutch fishermen’s organisation EMK has warned that wind farms in the North Sea are destroying marine life, and has launched a petition against them (see below).

In 2014, the EU adopted a directive for maritime and coastal spatial planning, and urged member states to ensure that human activities at sea take place in an efficient, safe and sustainable way, and to reduce conflicts between different maritime activities.

But at the same time, to tackle climate change, EU governments are determined to comply with the EU’s Paris Agreement to reduce greenhouse gas emissions by at least 40% by 2030 compared to 1990, meaning huge increases in offshore wind farm energy production.

In the UK, there are plans for a third of the country’s electricity to be produced by offshore wind farms by 2030, and for a new joint government/industry wind sector deal (Fishing News, 18 July, ‘Massive growth in offshore wind farms’).

Dale Rodmell, assistant chief executive of the NFFO, said that plans for the development of offshore wind farms are ‘unprecedented, and on a scale that cumulatively threatens the loss of large areas of fishing ground’.

He told Fishing News: “In English and Welsh waters, there is also a tangible shift in the planning approach for new capacity, tacking to more of an ‘industry knows best’ laissez-faire approach, to let the offshore wind industry decide where it wishes to locate, with fewer controls on the constraints and needs of existing marine users, such as fishing. Should this result in poor location choices, it will lead to greater spatial conflict between our two industries.

“All of this highlights the ever-greater need for important fishing grounds to be given greater protection in the marine planning system.”

He said there is also a need to improve the assessment of fisheries in the marine licensing process, particularly with respect to cumulative impact assessments. He pointed out that as new projects are gradually added, there is a systemic shifting baseline problem that downplays the impacts on fisheries resulting from the aggregate loss of grounds.

European fishermen’s organisation Europêche claims that the EU’s climate and energy objectives are putting the marine environment at risk, and ‘possibly changing the ecosystem faster than climate change could ever do’.

Europêche argues that while the fishing industry has carried out impact assessments of fishing operations to protect the marine environment, this precautionary approach does not seem to apply when it comes to the construction of offshore wind farms. “Despite estimated huge environmental effects on sea life, such as currents, salt levels, fish migration patterns and algae growth, the planned expansion process cannot go fast enough,” says the fishermen’s organisation.

“Europêche emphasises the absolute necessity of conducting thorough ecological and economic impact assessments before authorising any construction of offshore wind farms, as would be the case for any other sector operating in the marine environment.”

He said: “Many square kilometres are needed for this industry, which translates into habitat destruction and a direct loss of fishing grounds, due not only to the prohibition of fishing in the wind farms themselves, but also in the surrounding large buffer zones.

“The same grounds where fishermen were solely making use of the sea’s resources in the most sustainable way possible are now used and subsidised by governments to build offshore wind farms. As a consequence, fishermen are forced to displace from these areas and concentrate fishing effort in the already limited space left, increasing safety risks.”

He said it was ‘unthinkable’ that important fishing grounds should be closed to make space for harmful maritime constructions to achieve energy and climate goals. Also, vulnerable marine areas were being closed to fishing, but kept open to high-impact industries such as oil and gas extraction.

Calling for equal application of high environmental, social and safety standards to all industries, Daniel Voces said, “If Europe really wants to protect marine ecosystems from external threats, this unequal treatment towards marine uses cannot continue. The fishing sector should not be discriminated against compared to other economic activities, whose environmental and socio-economic impact is yet unknown in the long term.”

He called for consultations with fishermen as ‘an integral part of the process’ before construction of new wind farms was authorised.

Europêche emphasised that the fishing industry has a low carbon footprint and little impact on marine biomass, making seafood the best option in terms of food security to fight climate change.

“The industry calls on the European Commission to acknowledge and prioritise the fishing sector as a key user of marine space, in view of being first and foremost a high-quality and low-impact animal protein provider.”

A Dutch fishermen’s organisation has warned that the relentless expansion of wind farms in the North Sea is destroying marine life.

Job Schot, chairman of Dutch grassroots movement Eendracht Maakt Kracht (EMK), said: “This is an alarm call for the North Sea. The windmills destroy everything. The piles themselves present a hazard to marine life – and so do the electromagnetic fields around the power cables.”

He told the Fiskerforum website, “Species such as sharks and rays are extremely sensitive to these electromagnetic fields, which form a barrier that they do not dare to cross.” Dead porpoises have also become an unwelcome feature of catches in the North Sea.

“The legs being driven into the ground generates more than 200 decibels of noise – 60 decibels more than a jet taking off. Sound carries a long way underwater, and as porpoises communicate with sound, the noise leaves them deaf and blind. They become helpless, and they can no longer find their food.”

Fisherman Dirk Kraak said: “We already regularly pick up dead porpoises from the sea around the wind farms. This is a disaster from top to bottom of the food chain. Fish eat small animals, plankton, shrimps, worms, small crabs – what if they are hardly there any more?

“Then there are also fewer and fewer fish, which results in hardly any catch for the fishermen, but also less or no catch for the porpoises and seals.”

According to Job Schot, the 8m- to 10m-diameter windmill piles cause changes to current and seabed topography. “The sediment in which the benthic species that the fish prey on live is whipped up and carried away by the currents,” he said.

EMK’s position is that the wind farms affect every part of the marine food chain, and its warnings come as even more wind farms for the North Sea are proposed (Fishing News, 18 July, ‘Massive growth in offshore wind farms’).

“Wind farms cause a lot of disturbance in the water and on the seabed. Porpoises and other marine life are very sensitive to sound waves. This is something that urgently needs to be investigated, well before new wind parks are created.”

He said that fishermen are deeply concerned about the consequences for the environment.

Dutch fishermen have launched a petition against the North Sea wind farms.