Public Notice (Norfolk): Notice publicising a proposed application for a development consent order relating to construction and operation of an offshore wind farm located approximately 73km from the coast of Norfolk

Regulation 4 of the Infrastructure Planning (Applications: Prescribed Forms and Procedure) Regulations 2009 (as amended)

Notice is hereby given that Norfolk Boreas Limited of First Floor, 1 Tudor Street, London, EC4Y 0AH (the Applicant) proposes to apply to the Secretary of State under section 37 of the Planning Act 2008 for the above-mentioned Development Consent Order (the Application).

The Application relates to the construction and operation of an offshore wind farm located approximately 73km from the coast of Norfolk (at the closest point) (the Project). The Project, located in the southern North Sea, would cover an area of approximately 725km’. Offshore cables transmitting power from the Project would make landfall south of Happisburgh. From there buried cables would continue approximately 60km underground to an onshore project substation, and connect into the National Grid substation near Necton, Norfolk.

The Project is the second offshore wind farm proposal being developed by Vattenfall in this part of the southern North Sea. With the same proposed export capacity of up to 1.BGW (1,800MW), the Norfolk Vanguard Project (also classified as a Nationally Significant Infrastructure Project), submitted its DCO application to the Planning Inspectorate in June 2018 (Norfolk Vanguard). Vattenfall aims to optimise synergies in relation to the development, construction, operation and eventual decommissioning of the two projects, enabling overall impacts to be reduced. If both projects secure consent and progress to construction, these synergies will be realised. However, the Applicant needs to consider the possibility that Norfolk Vanguard may not be built, and therefore both scenarios are proposed to be included in the Application. Further details on the two scenarios to be included in the Application are set out in table 1 (see below).

A further explanation of the relationship between the Project and Norfolk Vanguard is included within the Non-Technical Summary accompanying the Preliminary Environmental Information publicised in accordance with this consultation.

The proposed DCO would, amongst other things, authorise offshore components including:

The onshore project area would be from the point at which the offshore cables come ashore (the Landfall) at Happisburgh South, Norfolk, to the existing Necton National Grid Substation. The cable route from landfall to the onshore project substation is approximately 60km. The key landfall and onshore components would, amongst other things, comprise the following: 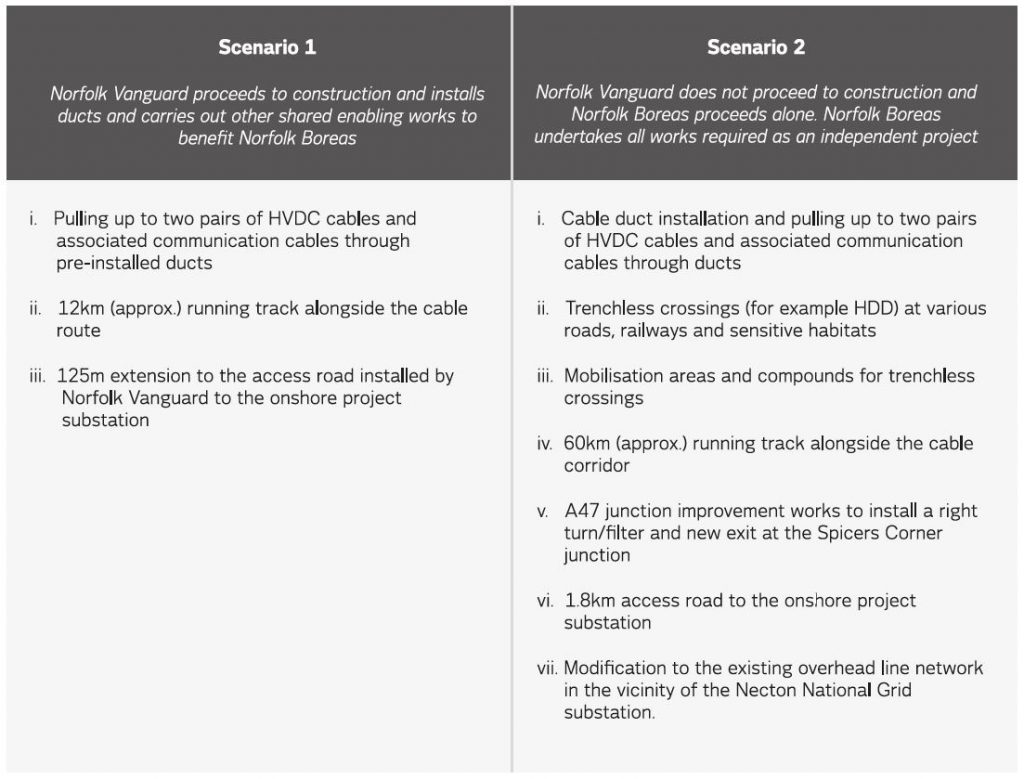 The Project is an Environmental Impact Assessment (EIA) development. Accordingly, the Applicant will be making a Preliminary Environmental Information Report (PEIR) available during the consultation period.

Electronic copies of the PEIR, which comprises a detailed set of documents, including maps, figures, and photomontages describing the Project, as well as a set of plans showing the overall location of the Project and a much shorter non-technical summary (NTS), may be accessed and are available free of charge from Wednesday 31st October 2018 to Sunday 9th December 2018 at the listed locations (below): 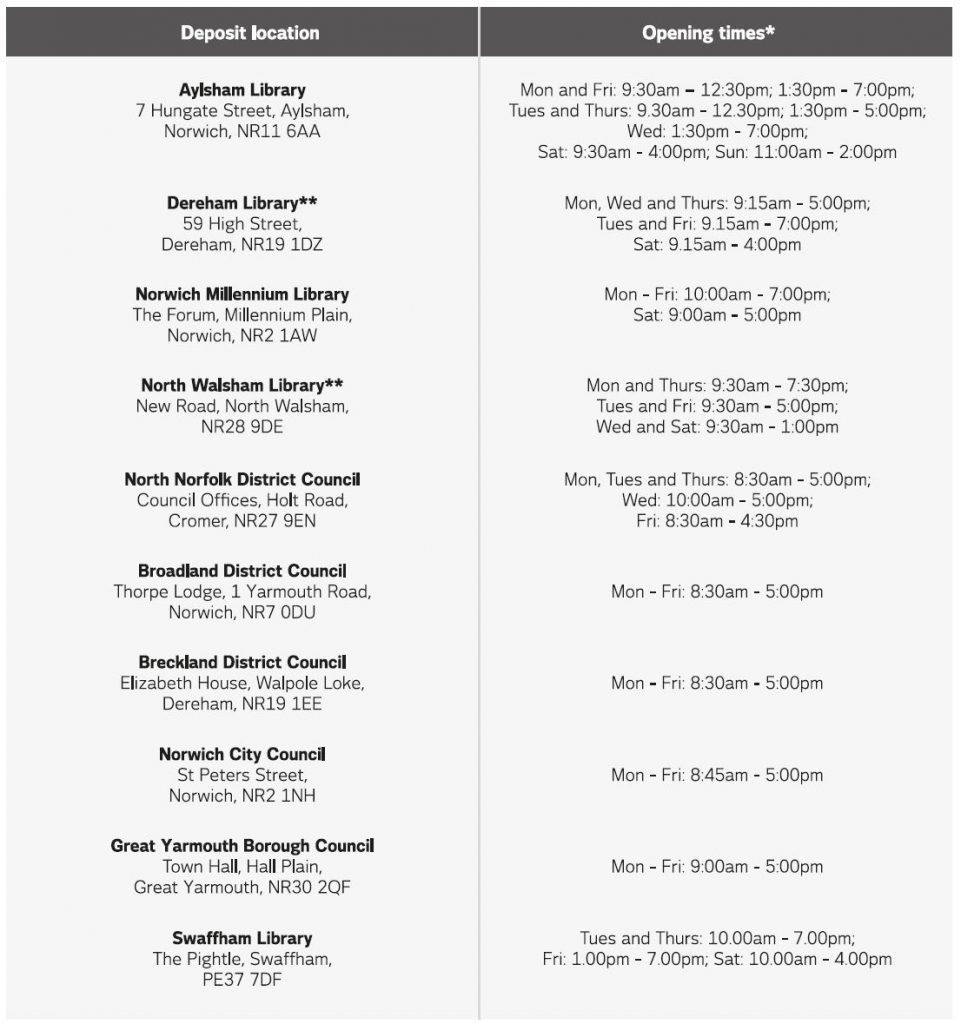 *The opening times of the locations listed ore ot the discretion of those in control of the building ond could vory to the times set out in this notice. The orgonisotions ond locations providing access to documentation os port of this consultation ore not in ony woy offilioted with the Project or the Applicant ond ore on independent ond neutral party to the opp/icotion process.

beginning to the end of the consultation period, which runs from Wednesday 7th November 2018 until Sunday 9th December 2018 at 11.59pm.

The preliminary environmental information will also be on display and members of the Project team will be available to answer queries at public information events being held by the Applicant at the following locations and times: 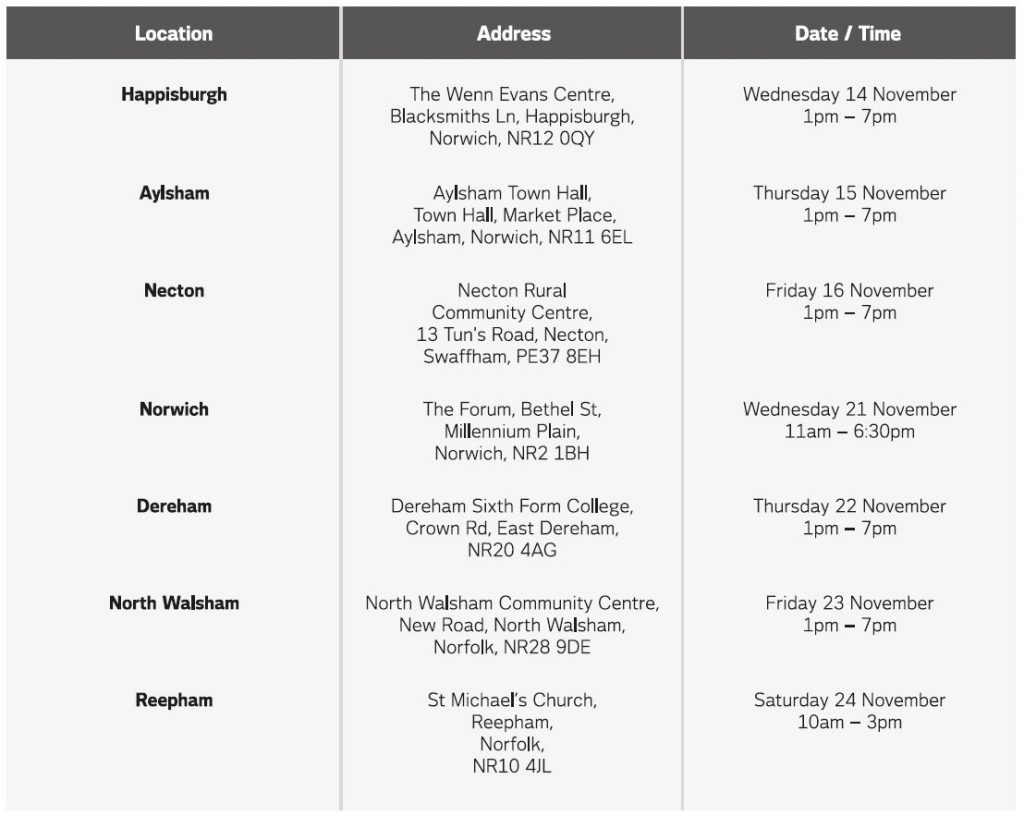 Paper copies of the PEIR and NTS can be provided on request from www.vattenfall.co.uk/norfolkboreas or from the Applicant at the address provided below at a cost of:

USB device copies can be provided free of charge and are available on request.

Any responses to or other representations in respect of the Project can be made in writing: 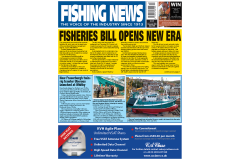