I write to you due to my concern regarding the London Convention of 1964 and its consequences for the British fishing industry, the government and Brexit.

This historic Convention recognised historic rights of other European nations to fish UK waters between 6 and 12 nautical miles from our shores.

All historic rights for the EU to fish between 12-200 nautical miles are derived from the disastrous Common Fisheries Policy (CFP) which has decimated our industry and communities.

When the UK withdraws from the EU the CFP shall cease to apply, however, the provisions of the London Convention will continue, allowing ‘back door’ access to the 6-12 nm band around the UK.

This would squander the diplomatically strong position of regaining all access rights to our rich fishing grounds which would allow the best deal to realise the huge opportunity to rebuild British fishing and coastal communities.

As the Convention needs two years notice in writing to be denounced the government must do so within the next 6 weeks before it submits notice on Article 50.

If the government does not take the easy option of denouncing this Convention it would illustrate that that there is evidently no intention of making or taking a serious stand on fishing or Brexit.

It would show the opportunity of automatic repatriation of an industry, that could double to be worth approximately £6.3bn annually, is to be betrayed a second time.

Fisheries will symbolise whether we’ve ‘taken back control of our borders’ and will therefore be the ‘acid test’ of Brexit. The government and MPs actions on the London Convention being the first test.

The government must serve notice to denounce this Convention as a tangible and immediate demonstration of its will to repatriate and safeguard the nation’s greatest renewable resource upon withdrawal and demonstrate the government’s intent and commitment on Brexit.

I hope that as a Member of Parliament that we can count on your full support in ensuring this Convention is denounced.

In support of Fishing for Leave 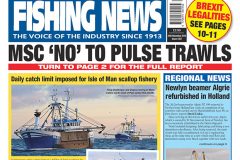 Re: Open Letter from the Warsash Inshore Fishermen’s Group