The 2017 Fishing News Awards consists of 12 categories. Each category recognises excellence within an aspect of commercial fishing in the UK and/or Ireland from January-December 2016. 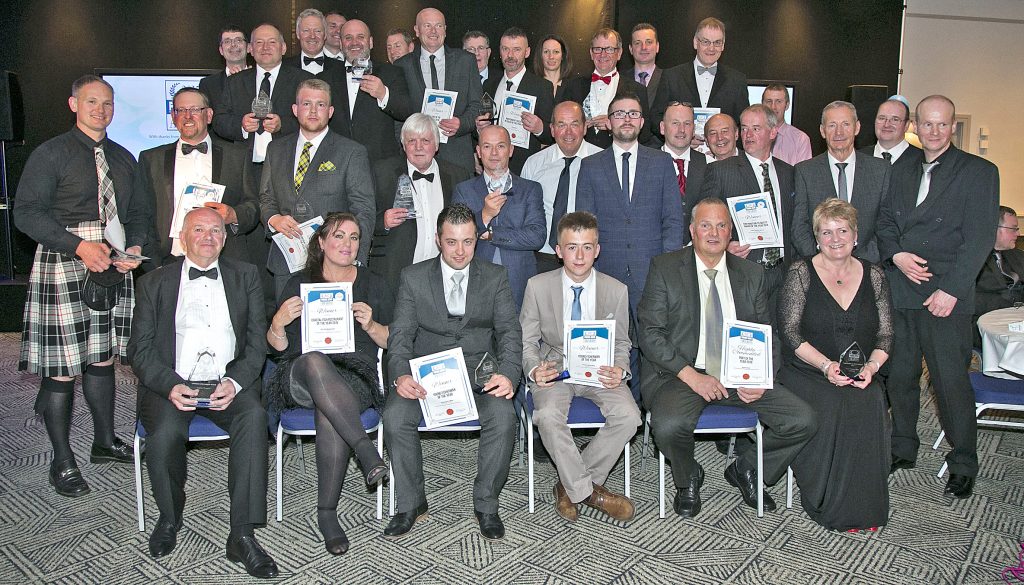 Demersal Fisherman of the Year sponsored by Peterhead Port Authority 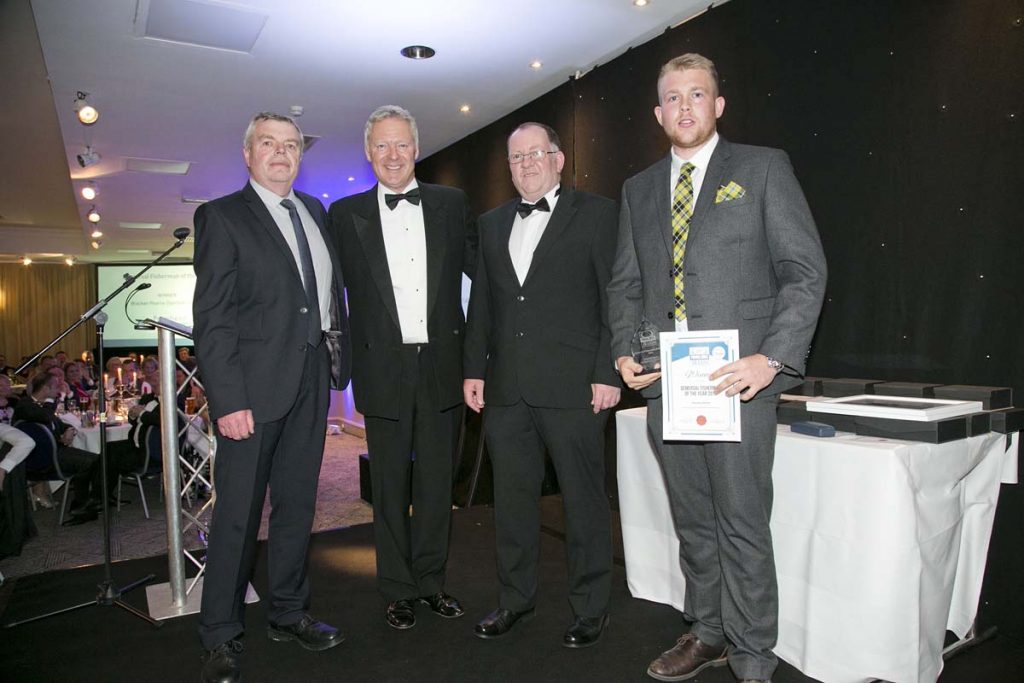 Winner: Brackan Pearce (Spirited Lady III)
Skippering the twin-rigged over-10m Spirited Lady III for the past four years, Brackan Pearce has shown true determination to succeed. He works well with other fishermen and is dedicated to the job, eager to try new ideas and methods. He loves his local community, Mevagissey, and is a leading light among a great bunch of young lads who hail from that Cornish port. 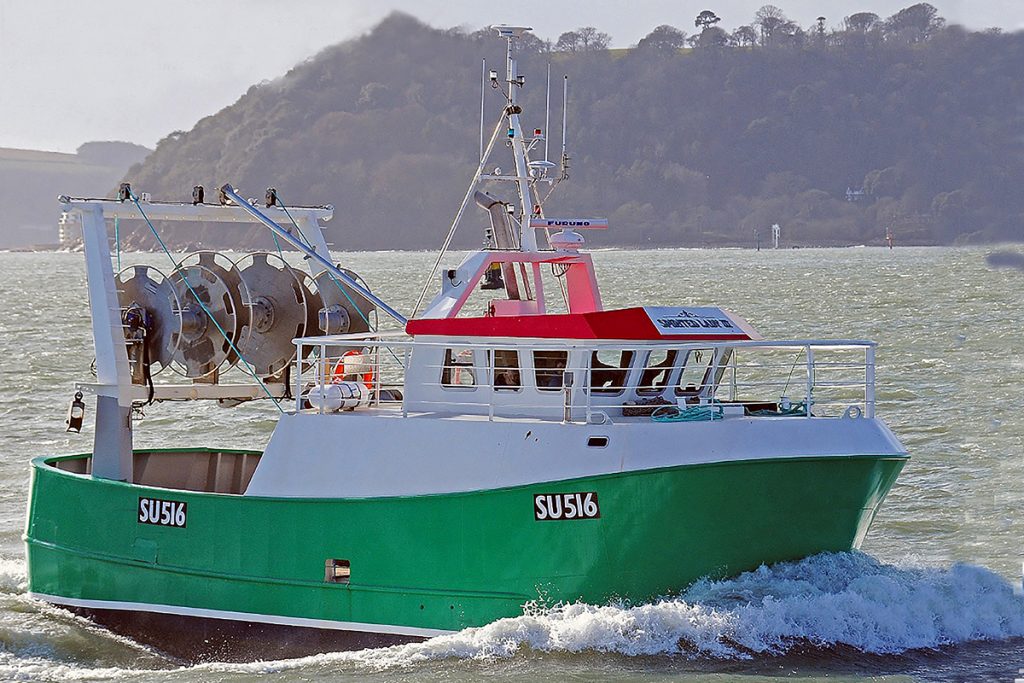 Pelagic Fisherman of the Year sponsored by Wartsila 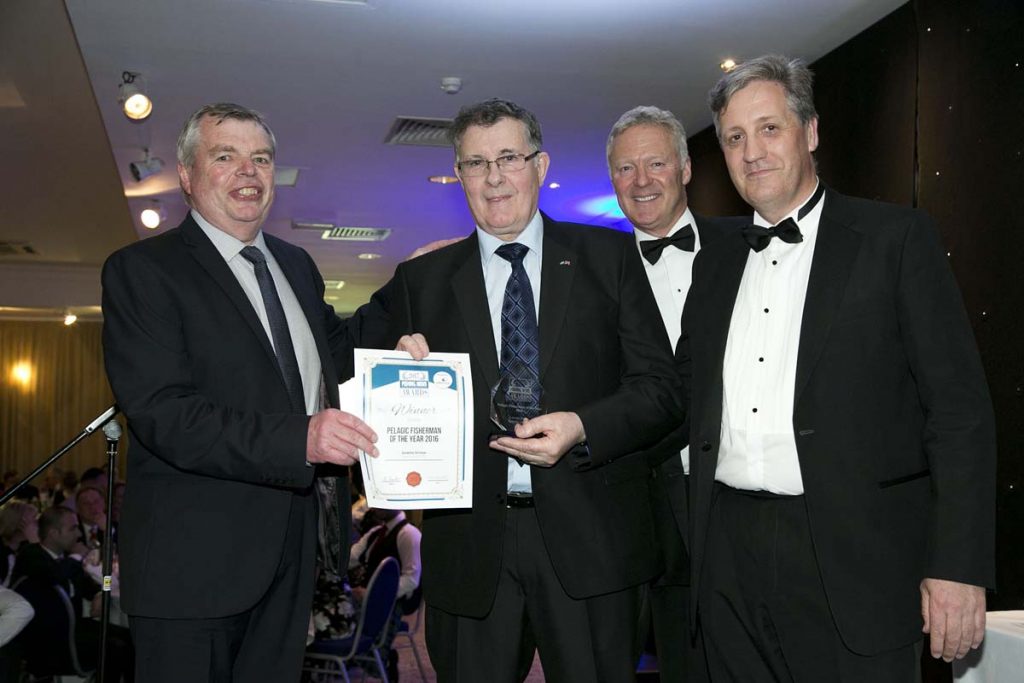 Winner: Lowrie Irvine (Antares LK419)
Lowrie was born and raised on the island of Whalsay – home to most of Shetland’s pelagic fleet – with a strong family tradition of fishing. With his partners he formed the Antares Fishing Company in 1973, since when they have taken delivery of five new pelagic boats of the same name. This continual reinvestment in pelagic fishing, which culminated with the  arrival of the latest Antares at the end of 2016,  are a testament to how Lowrie’s personal commitment to the fishing industry is as strong today as it has ever been. 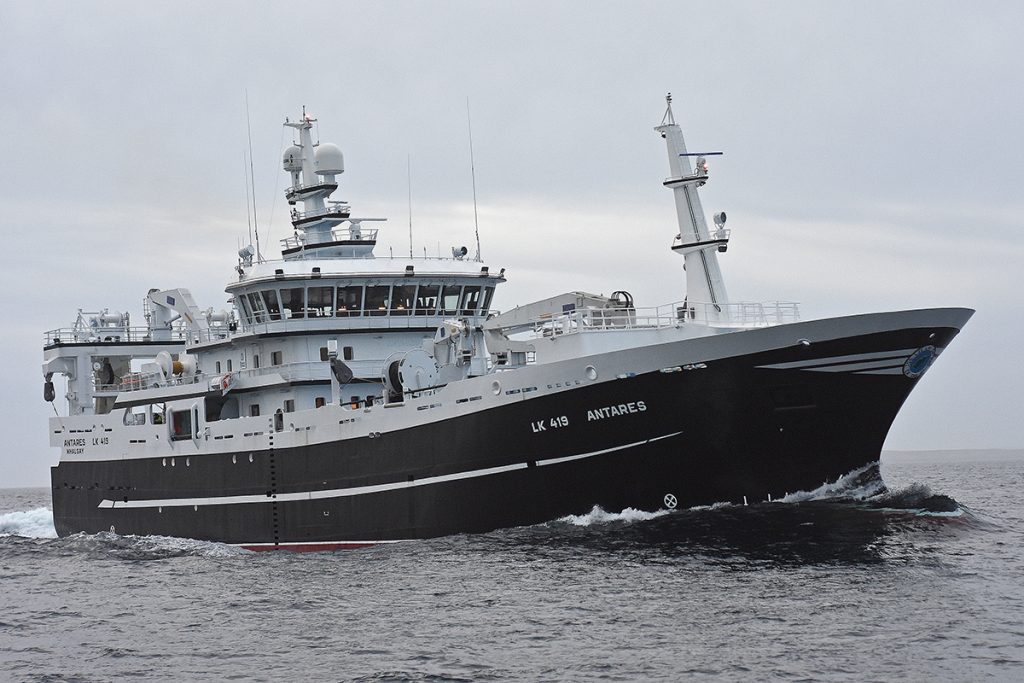 Shellfish Fisherman of the Year sponsored by Gael Force 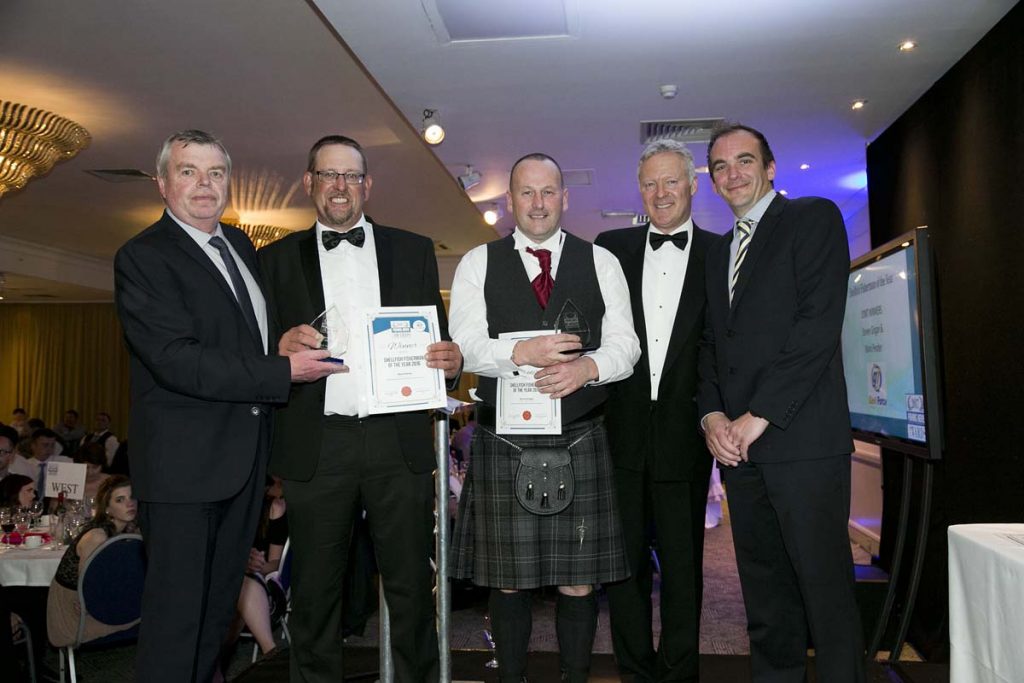 Winner (static gear): Mark Pender (Tradewinds R 14)
Scilly Isles-based Mark Pender is a director at Island Fish Ltd and skipper of the Tradewinds. His knowledge of business customer requirements and understanding of the habitat and movement of local fish ensure that his catches command high returns without working large amounts of gear. As Chair of the Isles of Scilly Fisherman’s Association, Mark has encouraged local fishermen and the IFCA to develop conservation measures to support the island’s crawfish population. 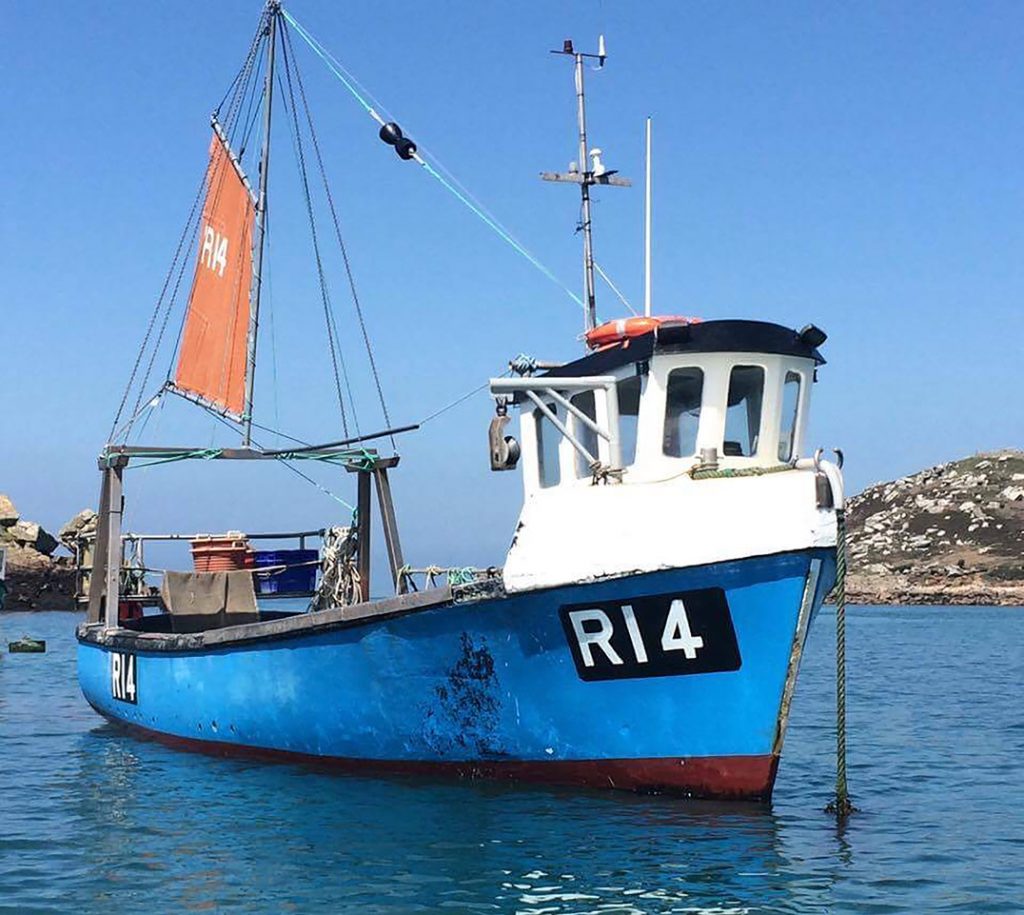 Winner (mobile gear): Steven Girgan (Susan Bird FR 357)
Steven Girgan has been a top scallop fisherman for 35 years, but has equal talents with paper and pen, with which he tenaciously fights for fishermen’s rights. Almost single-handedly at times, Steven has managed to keep local scalloping fishing grounds open to scallopers. 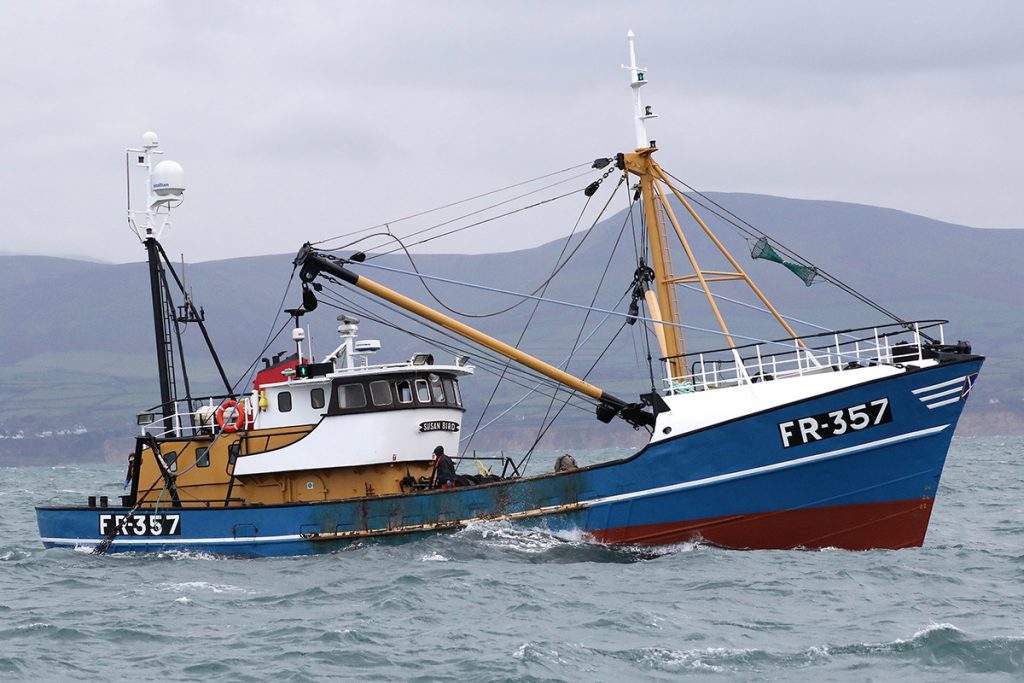 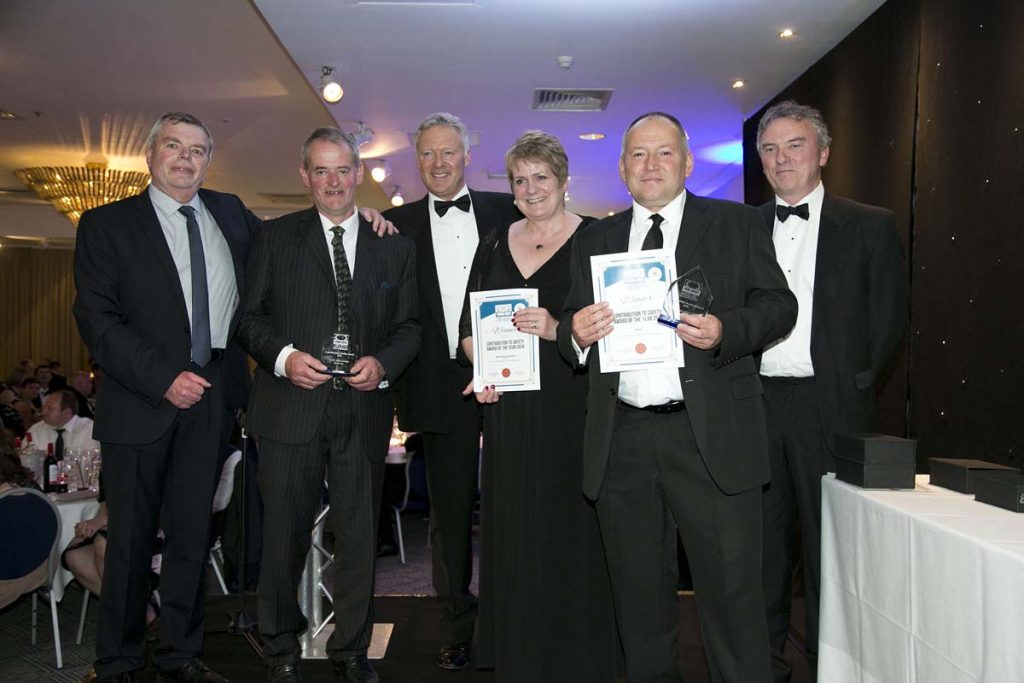 Joint Winners:
NAFC Marine Centre (Scalloway)
The NAFC Marine Centre in Scalloway provides a full range of fisheries training courses and carries out maritime scientific research, both of which are of vital importance to the local economy. Training covers fishing, aquaculture, the merchant navy, and marine and shore-based engineering, with courses available for all ages and levels of experience. 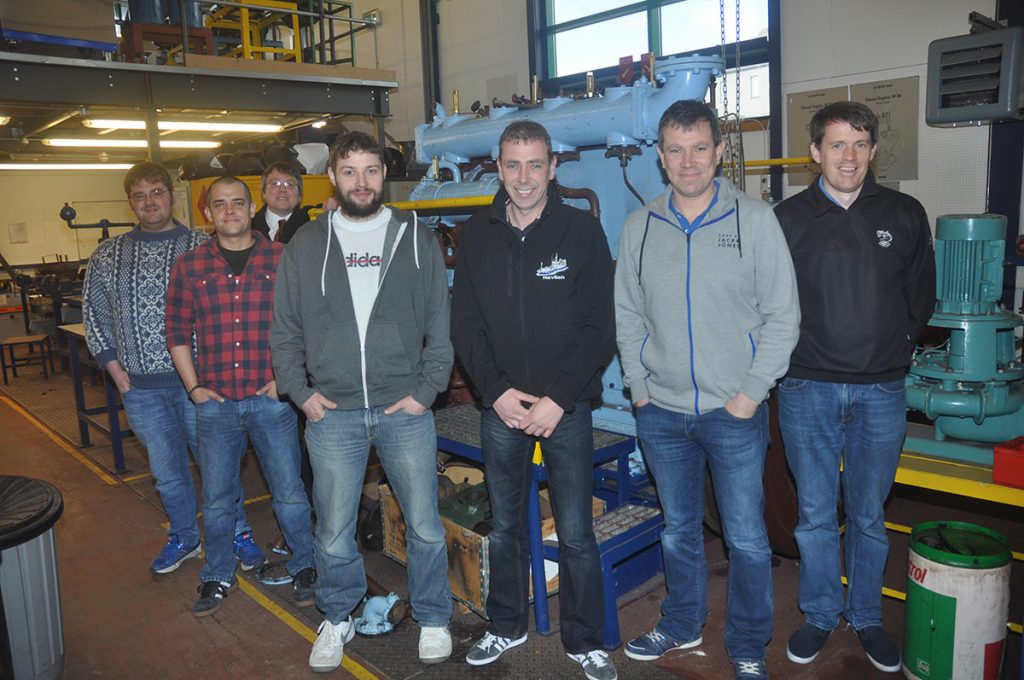 RNLI: Fishing Safety Team
The RNLI Fishing Safety Team underlines the importance of personal flotation devices and personal safety at sea. In addition to meeting individual skippers and crews all over the UK, the team carries out training sessions with new entrants to the industry. A recent addition is cold water shock training, which has been very well-received by everyone who experienced it. 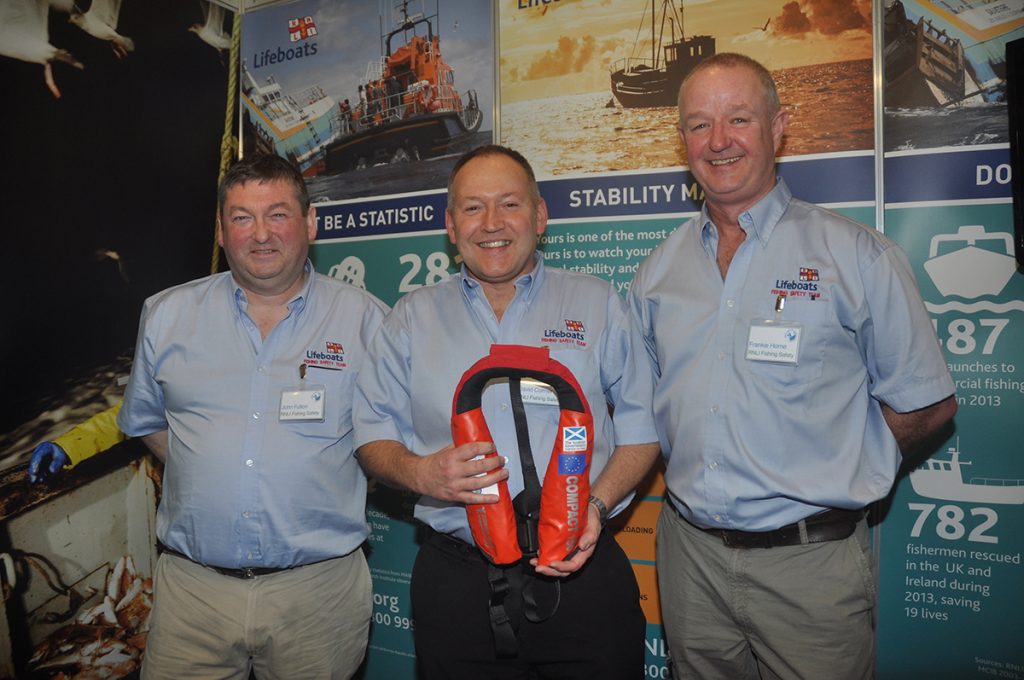 Technical Innovation of the Year sponsored by Box Pool Solutions 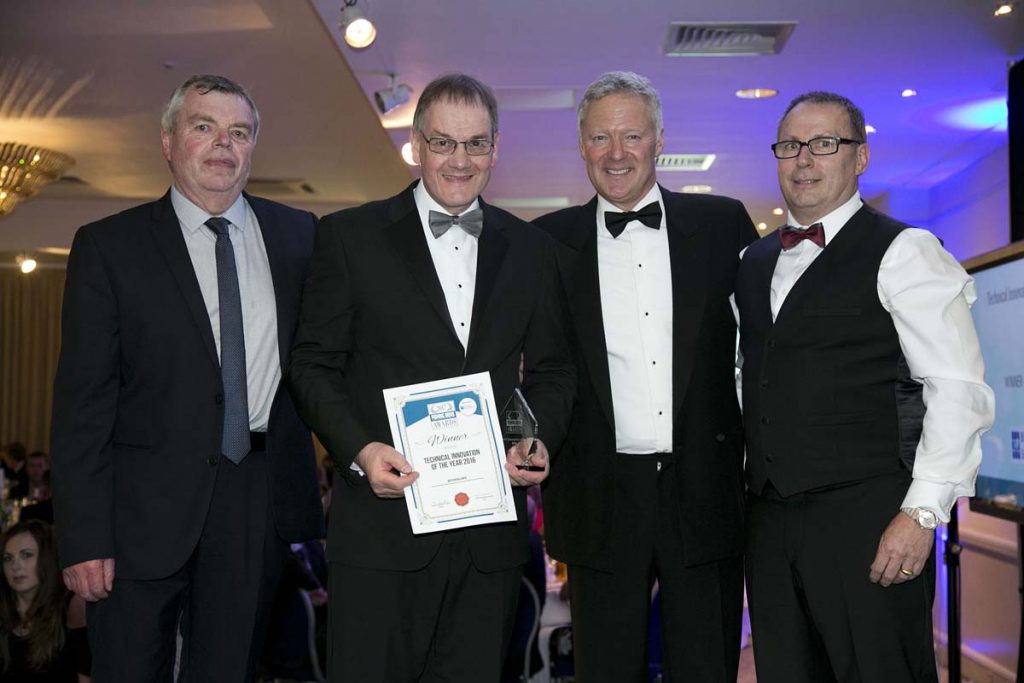 George West was presented with the Technical Innovation of the Year Award for the QuikSling MOB Recovery System from Michael Park of category sponsor Box Pool Solutions Ltd.

Winner: QuikSling
QuikSling snaps a chest sling snugly under the armpits of a remote casualty by jerking a rescue line. It offers one of the safest postures for man-overboard recovery, and is recommended in a new SOLAS regulation. The product has undergone further development in 2016, and is now in commercial production and being fitted to a wide range of fishing vessels. 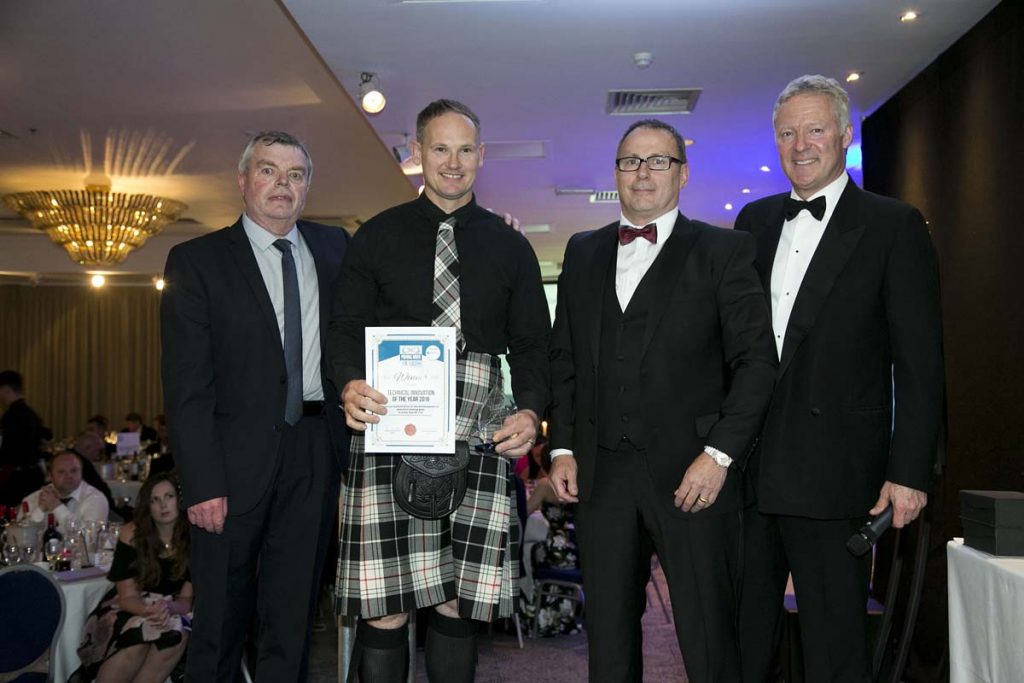 David Stevens received a special contribution award on behalf of the Newlyn whitefish trawler Crystal Sea SS 118 from Michael Park and Box Pool Solutions Ltd, in recognition for the continuing efforts the crew have put into developing highly-selective fishing gear. 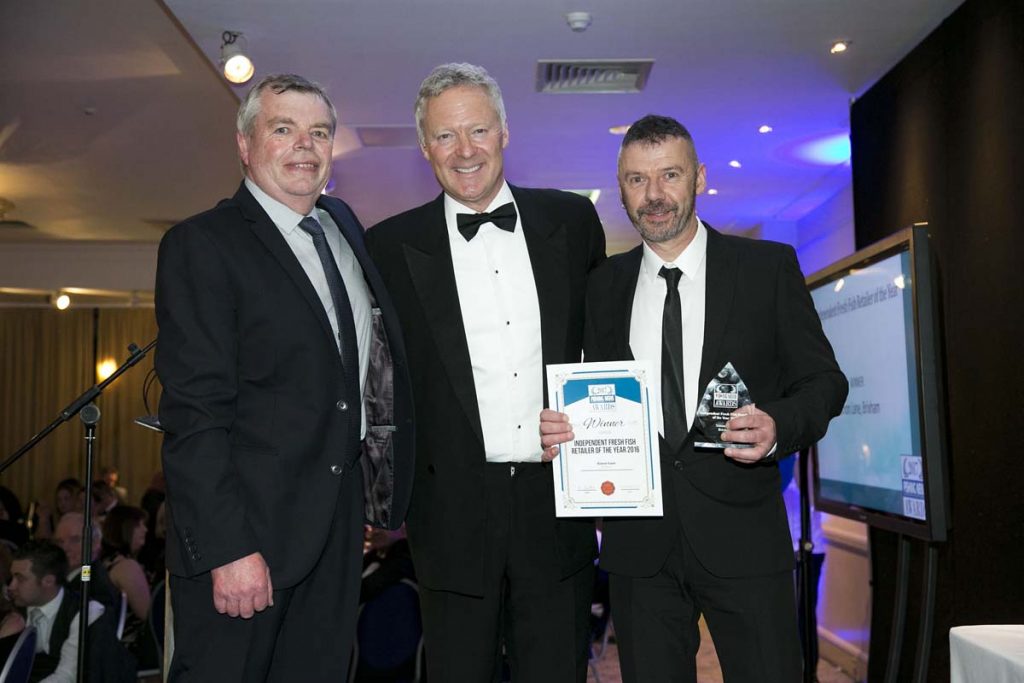 Winner: Simon Lane, Brixham mobile fishmonger
Simon Lane sources his fish and shellfish from his local port of Brixham and sells them across the surrounding area from his van. He is particularly noted for the freshness and variety of his fish, and the quality of his service, with friendliness, reliability, affordability, and home delivery all being highlighted.

Fish Processor of the Year 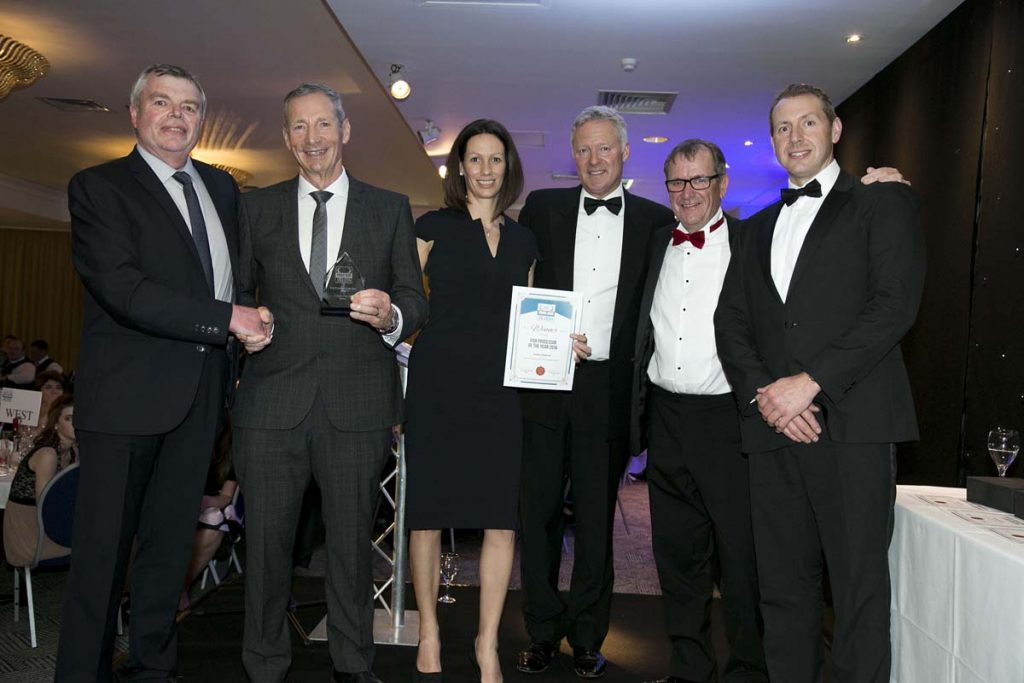 Arnold Locker, Rebecca Bennett, Richard Barker and Andrew Locker were the proud recipients of the Fish Processor of the Year Award.

Winner: Lockers Fish (Whitby)
Lockers Fish Ltd provide outstanding quality and price, often using fish caught by their own boats fishing from Peterhead. The company has a combined fish processing experience among family and employees of over 100 years, and combines old and new methods of fish processing to great effect.

Coastal Fish Restaurant of the Year, sponsored by Coast Magazine 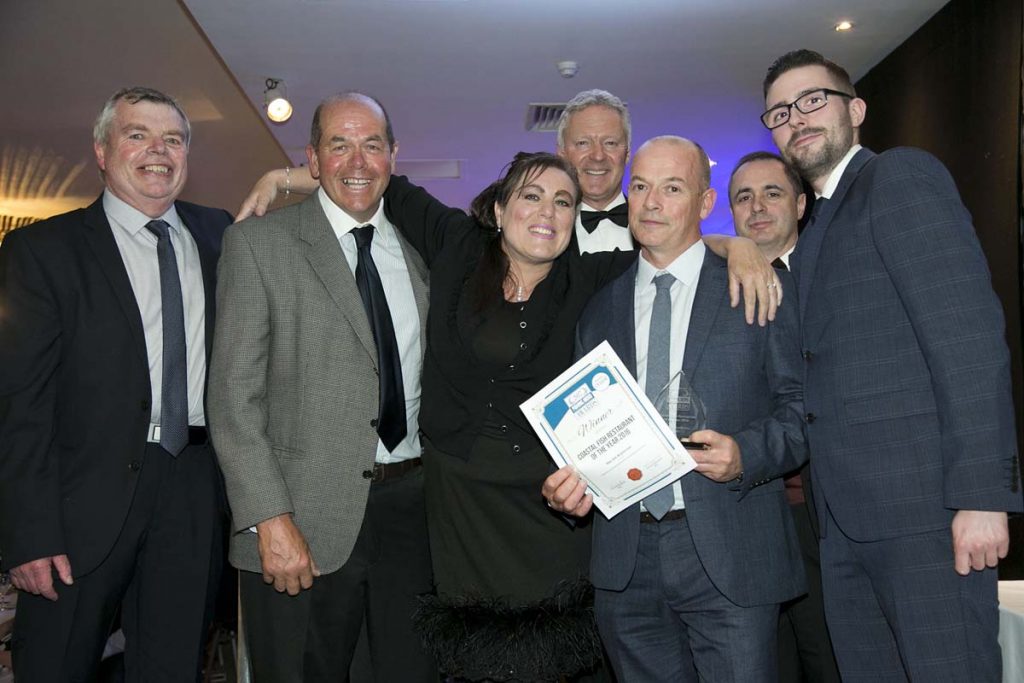 Winner: The Old Boat House (Amble, Northumberland)
It specialises in serving seafood and fish fresh from local fishing boats where possible. Whether it’s local lobster, Scottish mussels or locally-smoked salmon, their menu concentrates on British fish. Renowned for its friendly service and picturesque harbour views, the bistro has a large and dedicated fan base.

Fishing Port of the Year 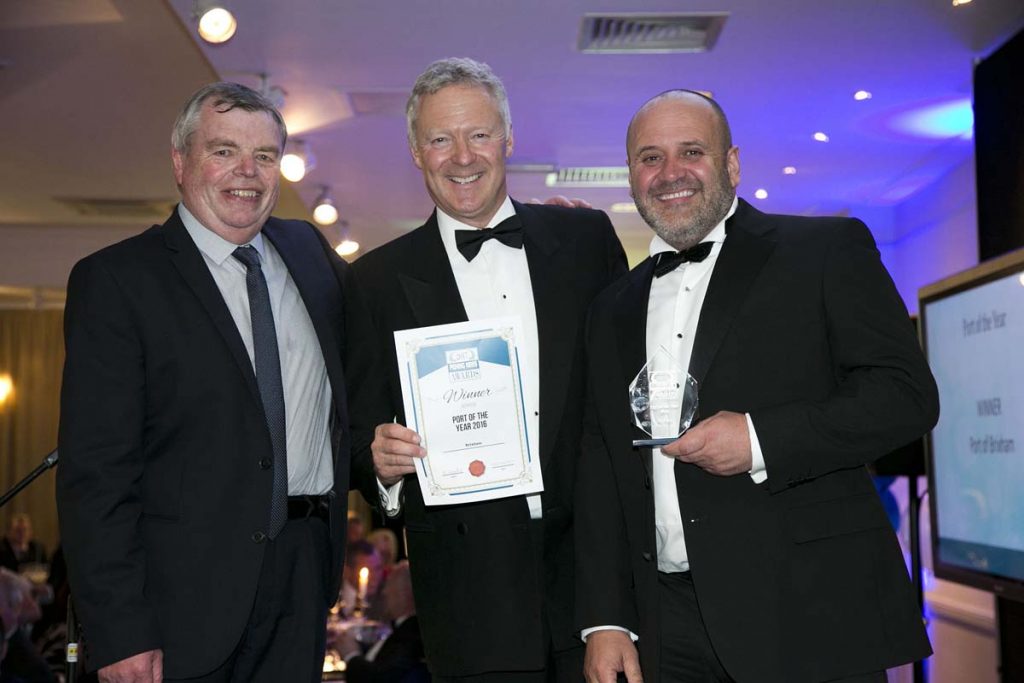 Barry Young of Brixham Trawler Agents receives the Port of the Year Award from Rory Bremner.

Winner: Brixham
During 2016, Brixham went from strength to strength with regular weekly turnovers of over £1m, and will continue to invest and grow for the benefit of the industry. 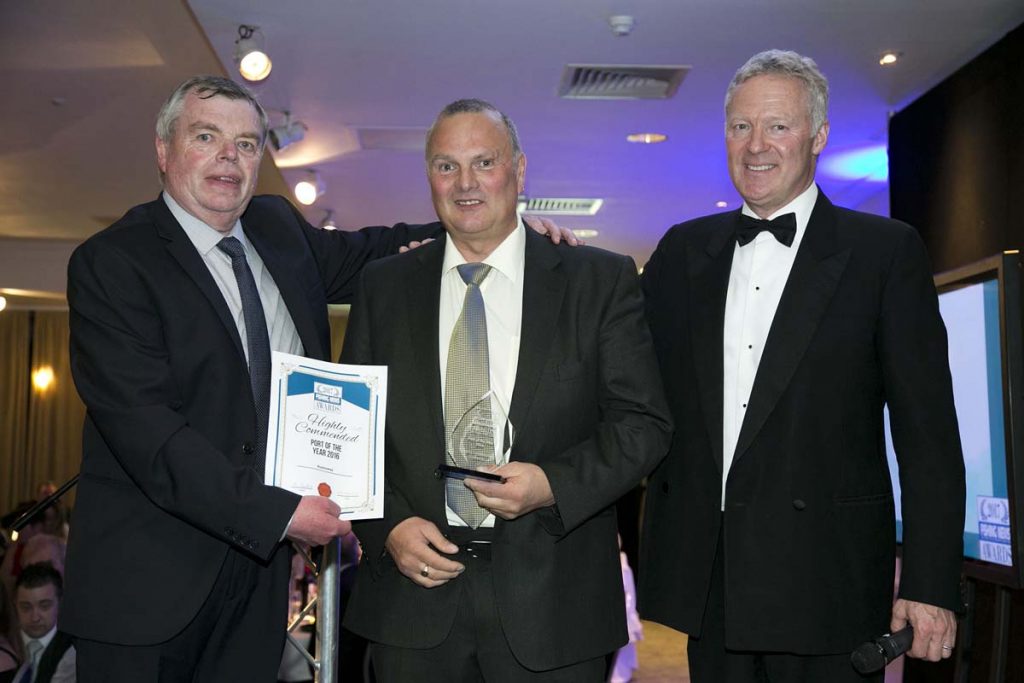 Fishing News editor David Linkie presents a Highly Commended Award to Brian Morrison from Scalloway harbour in recognition of the marked turnaround now being delivered at the Shetland port.

Highly Commended: Scalloway
Scalloway’s fishmarket is being rebuilt and extended as part of a £3m development to modernise the building to cope with the highest level of whitefish activity seen for more than 20 years.

New Boat of the Year 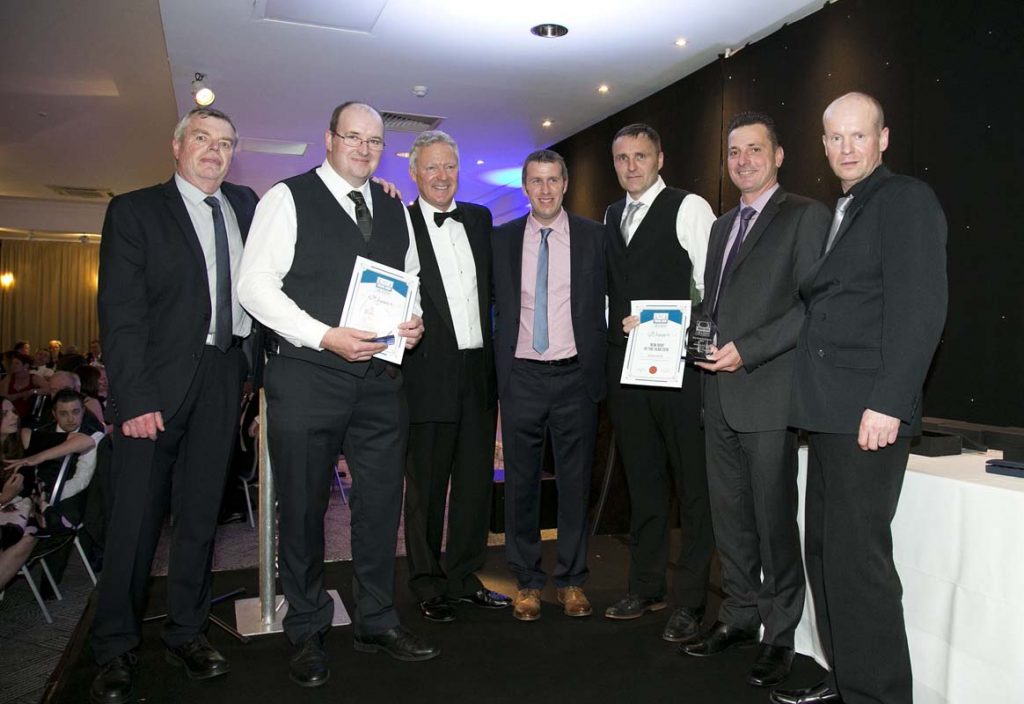 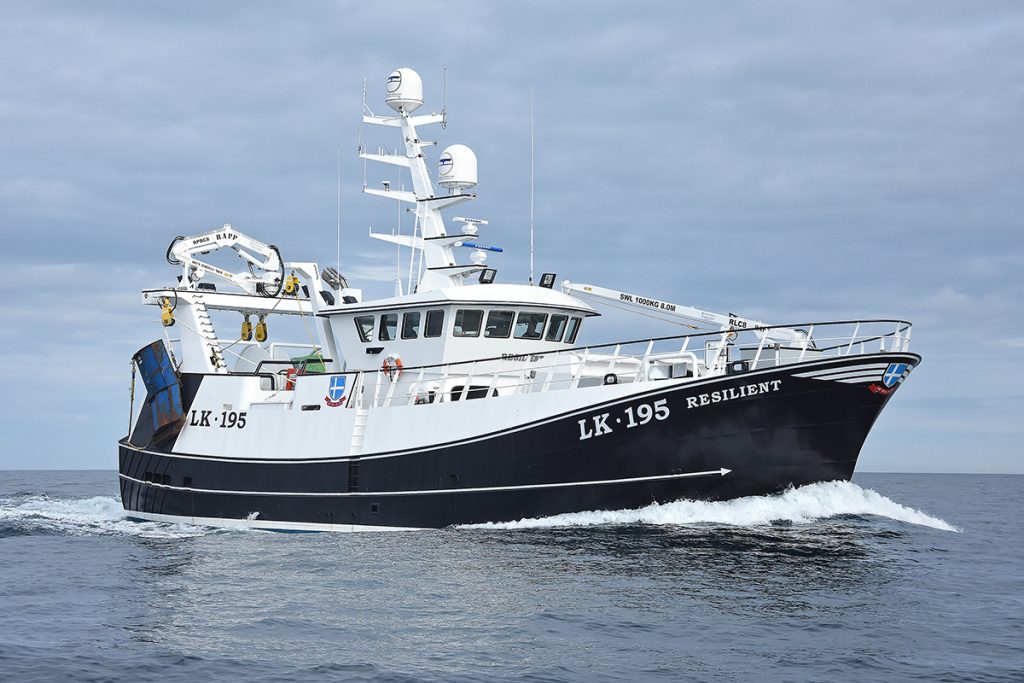 Young Fisherman of the Year 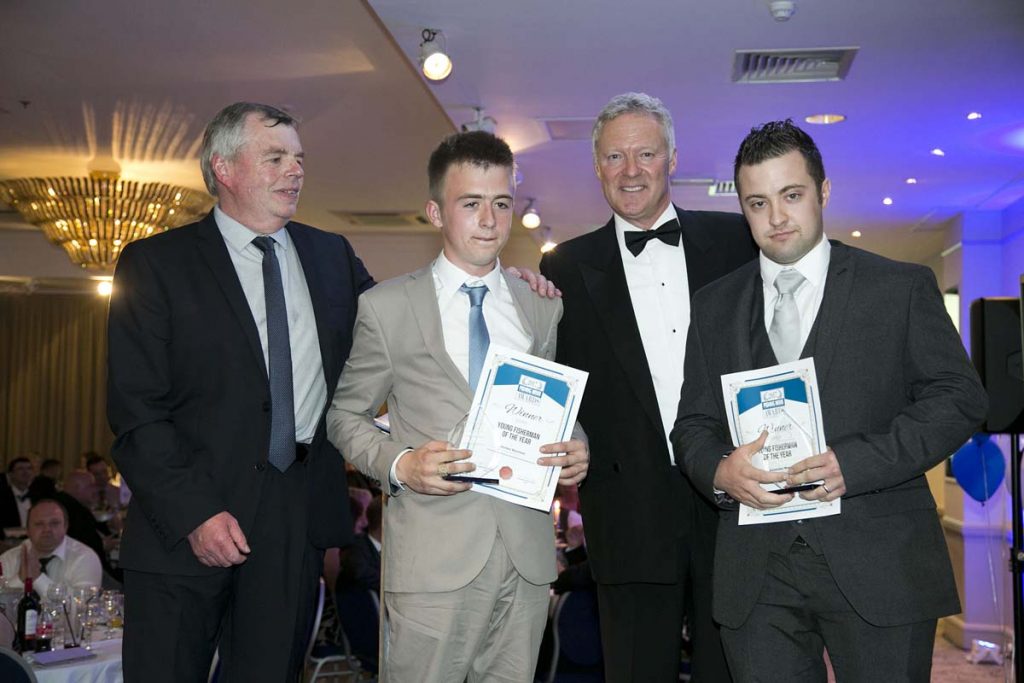 Jordan Harrison from Bridlington (2nd left) and Alexander West of Fraserburgh (right) with their Young Fisherman of the Year Awards.

Jordan Harrison, Crewman Riptide H10
Jordan Harrison is highly regarded in his local harbour of Bridlington, not only for his hard work, values and keen fishing knowledge, but also for showing the attributes of a natural leader. 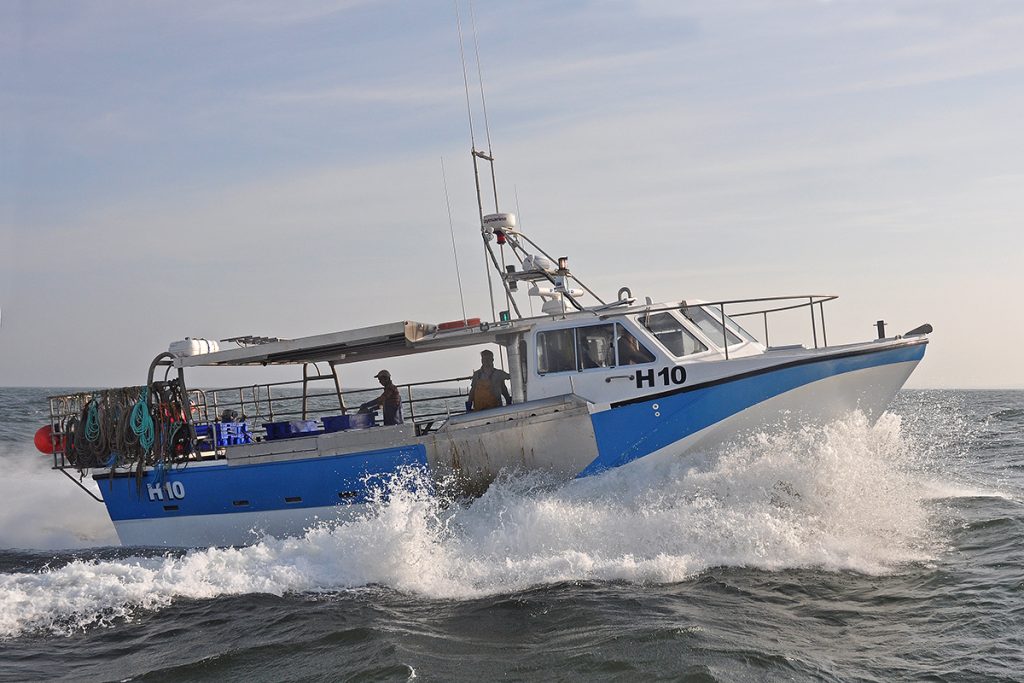 After completing his Class 2 ticket at 19, Alexander went to sea as skipper the following day. He has a wealth of knowledge in all aspects of the boat and the skills and work ethic needed to run a successful fishing boat. 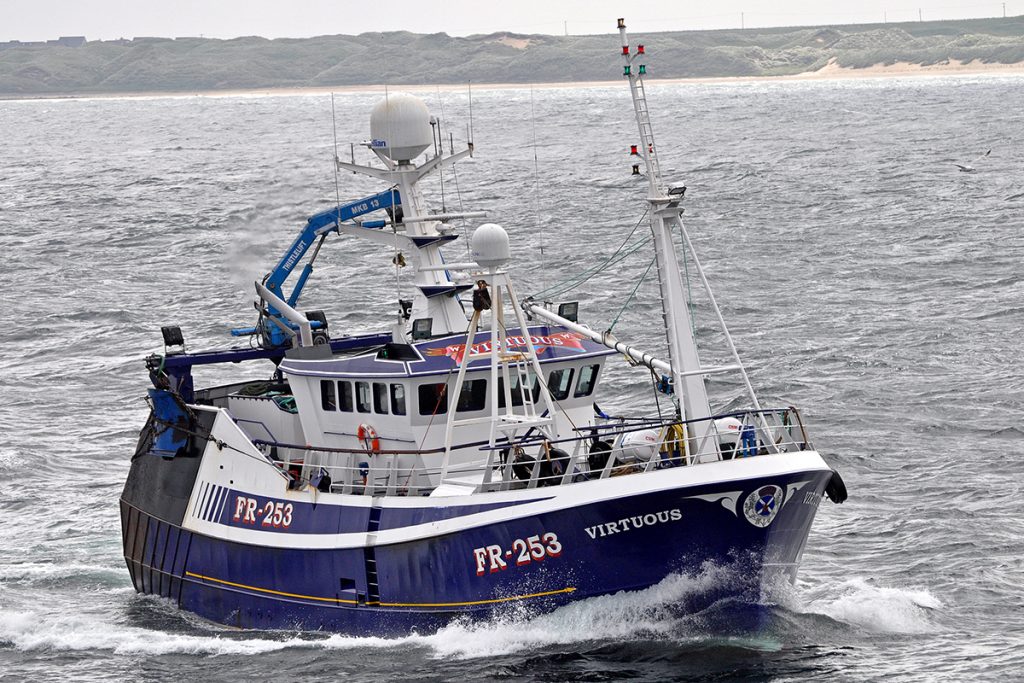 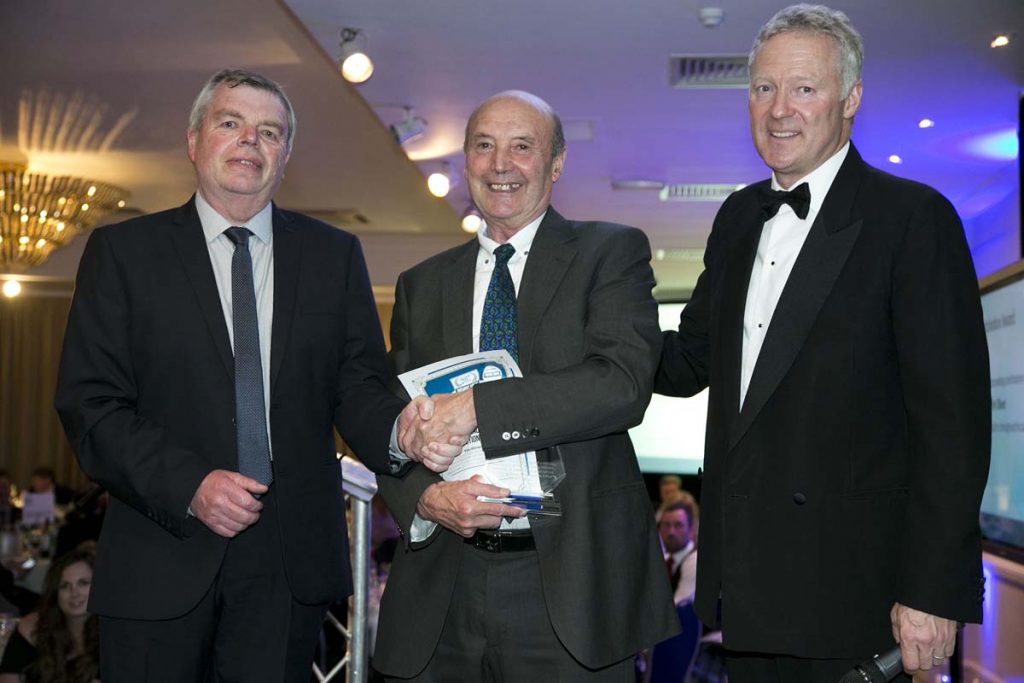 Presented to: Tim Oliver
In recognition of Tim Oliver’s long and continuing contribution to the UK fishing industry, including 34 years of dedicated service to Fishing News, 23 of them as Editor (1987 – 2010). 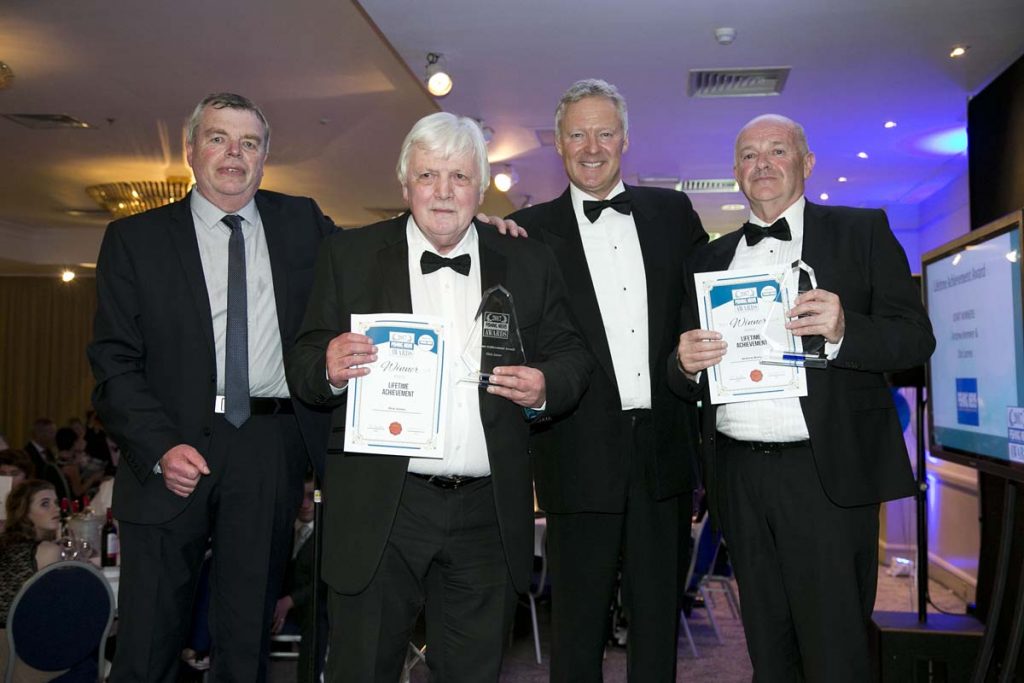 Andrew Bremner
Andrew Bremner has been widely recognised as a leading seine-net skipper for nearly 40 years, during which time he has been a constant advocate for the Scottish fishing industry, and taking every opportunity to support local processors.

Dick James
Dick James has been involved in fisheries in various capacities for 40 years, including 20 years as chief executive of NIFPO, and representing his members’ interests in many committees and groups at EU, UK, national and regional levels.