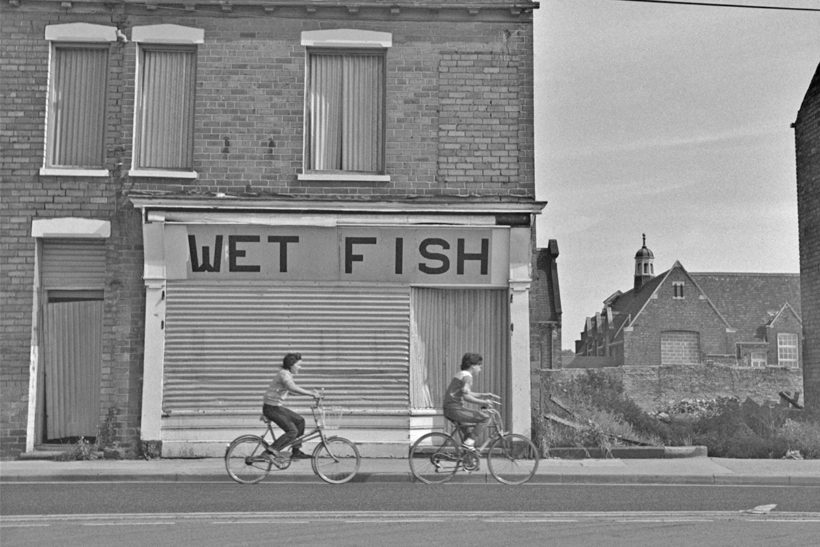 In 1971, photographer Alec Gill began to document the life of Hull’s Hessle Road fishing community, building up a collection of over 6,600 black and white negatives. Here he shares some of the memories evoked by his pictures…

Having hitch-hiked abroad and photographed people in Berlin, Syracuse and Beirut,  I suddenly had the thought: why don’t I become a tourist in my own town? And so  I focused upon my home port’s fishing community.

Why? Because the fishing families seemed to get a ‘bad press’ from outsiders. Fish is a smelly product; fishermen were falsely seen as drunkards, and the women as screaming fishwives. Even my own mother made derogatory remarks about Hessle Roaders. But I found the people to be exceptionally nice and friendly.

On top of the social snobbery within Hull, the trawler owners ran the fish dock like a feudal system, with casual labour and ‘walkabouts’ for anyone who stepped out of line. And the fishing families were already ‘underdogs’ when confronted by Mother Nature in the teeth of an Arctic storm. So I hoped, through my images, to portray the Hull fishing community in a more positive light… 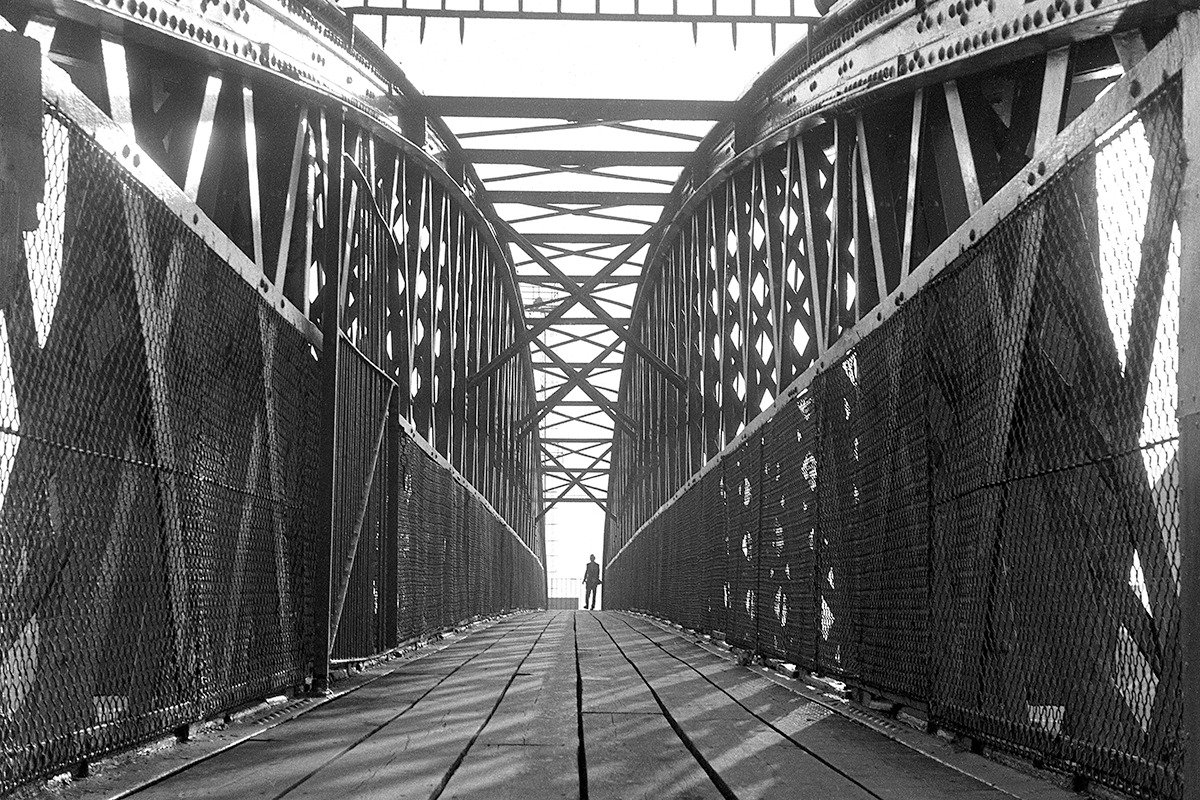 Industry and community often intertwine: Arctic trawling was dynamic and death-defying at times. No family knew if, or when, the Mission man might call to ‘break the news’. It was because Hull’s Hessle Road fishing community lived so close to death that they had such a zest for life. Strickland Street (‘Stricky’) Bridge was one of three walkways that linked the fish dock to the community. I had to wait several minutes to ensure that I captured someone on the bridge. I always like to have people in my photos. This lonely figure was worth the wait. 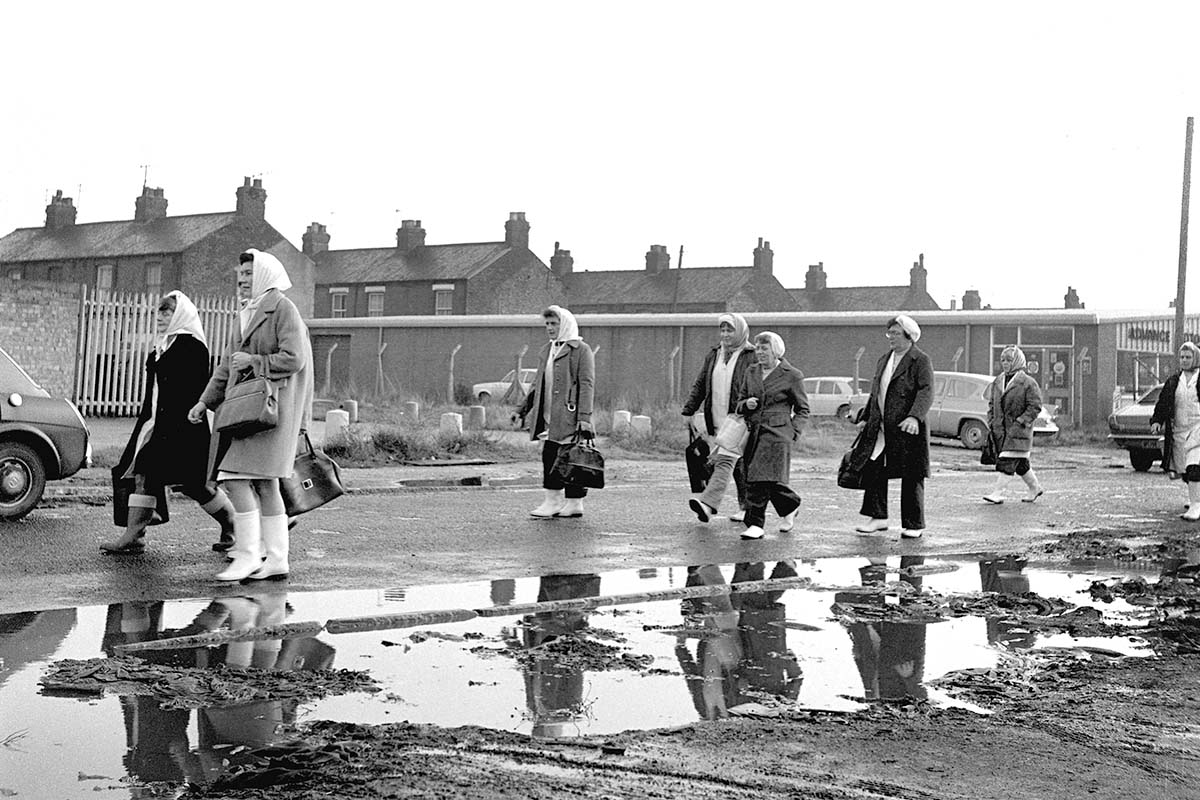 Lunchtime dash: Friday lunchtime might have been a half-day for these nine fish-factory women. In their winter coats, white headscarves and wellingtons, and clutching their shopping bags, they all look in a hurry on that December 1977 day. I love reflective images. As soon as I saw the puddles in the demolished Gillett Street and the women coming along, I quickly got into position to take the picture. Behind the women can be seen the terraced houses awaiting the bulldozers during the physical break-up of the declining fishing community. 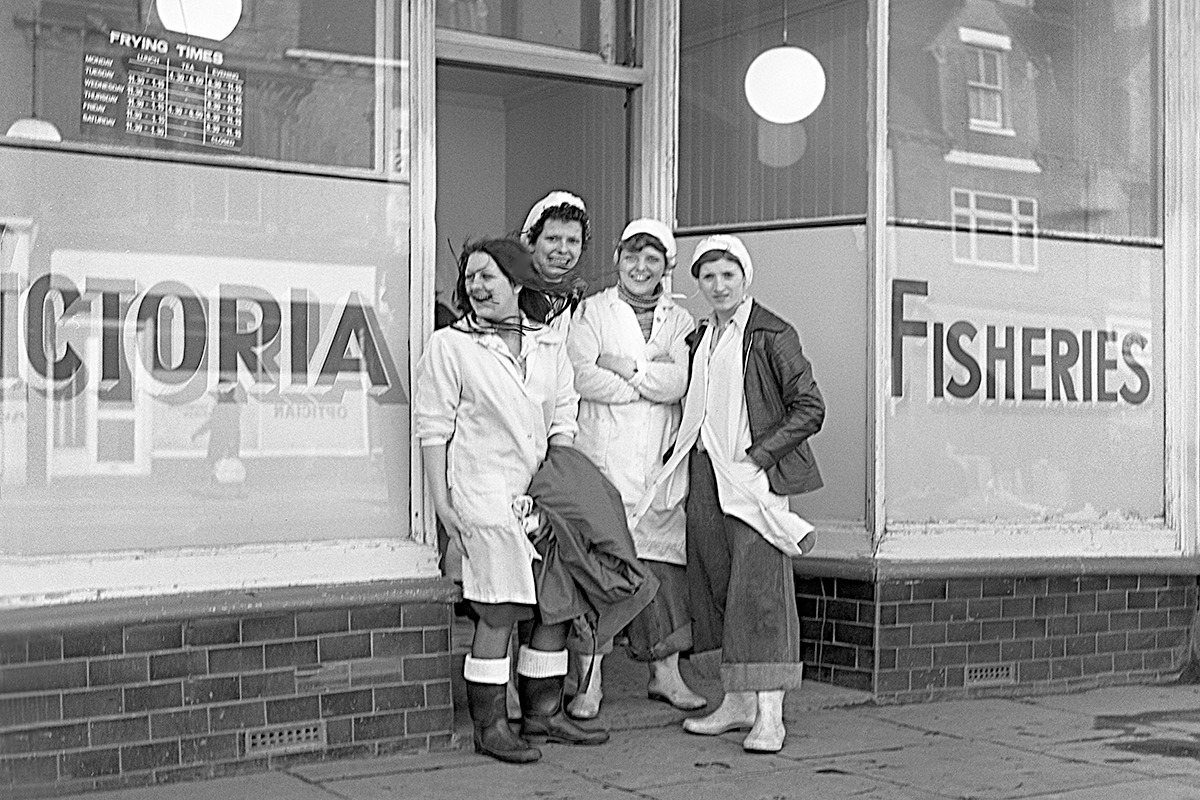 Fish n’ chips: Hull people – but especially Hessle Roaders – love their fish and chips (me too). These four girls from Marr’s Fish Factory, in their white caps, overalls and welly boots, were waiting to go into Victoria Fisheries for their lunch. It was a windswept March day in 1978 – as can be seen from the girl on the left, as her hair waved in the breeze. Hull fish was geared towards the mass market – like fish and chip shops – rather than restaurants. Hull trawled for quantity of fish rather than quality. 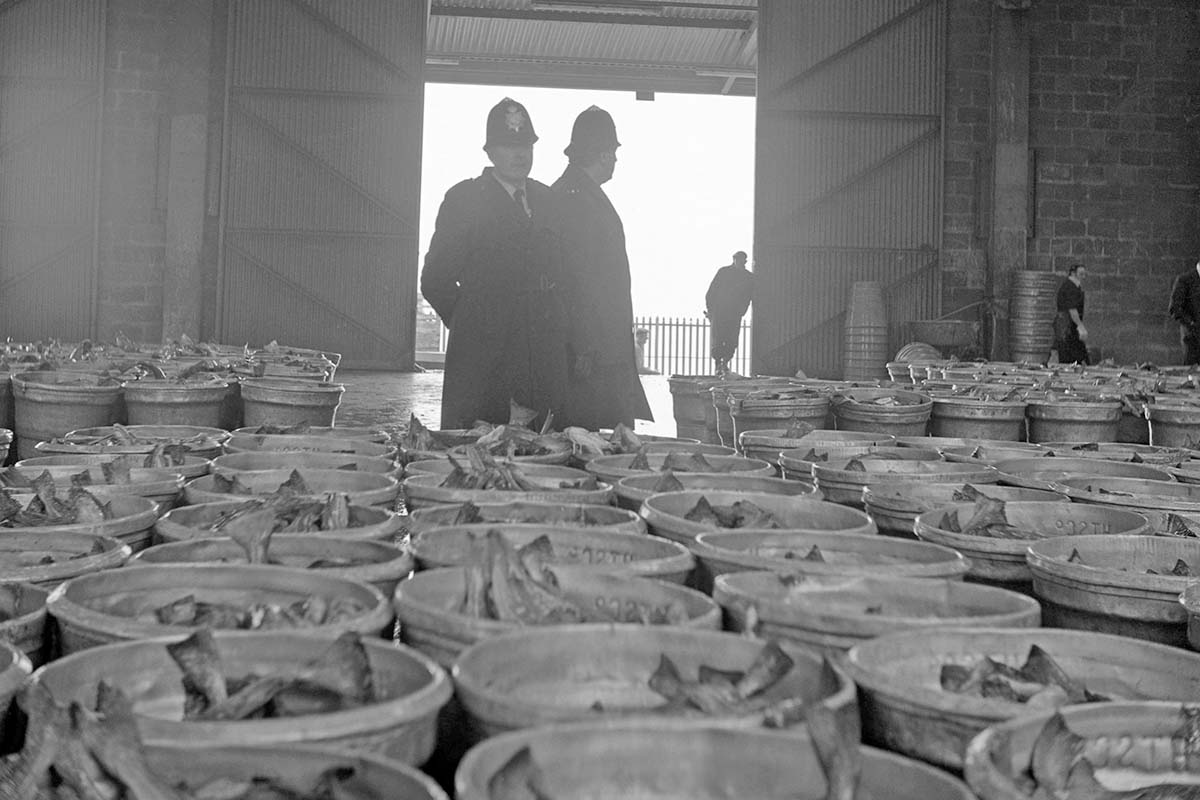 Kits and cops: The British Transport Police always kept an eye on fish dock activities – to ensure that there was no ‘fiddling’ taking place, of course! It was understood that ‘backhanders’ oiled the wheels of the trawling industry. The British Transport Police has a proud history dating back to the Thames River Police in 1798, and evolved separately from the regular force. 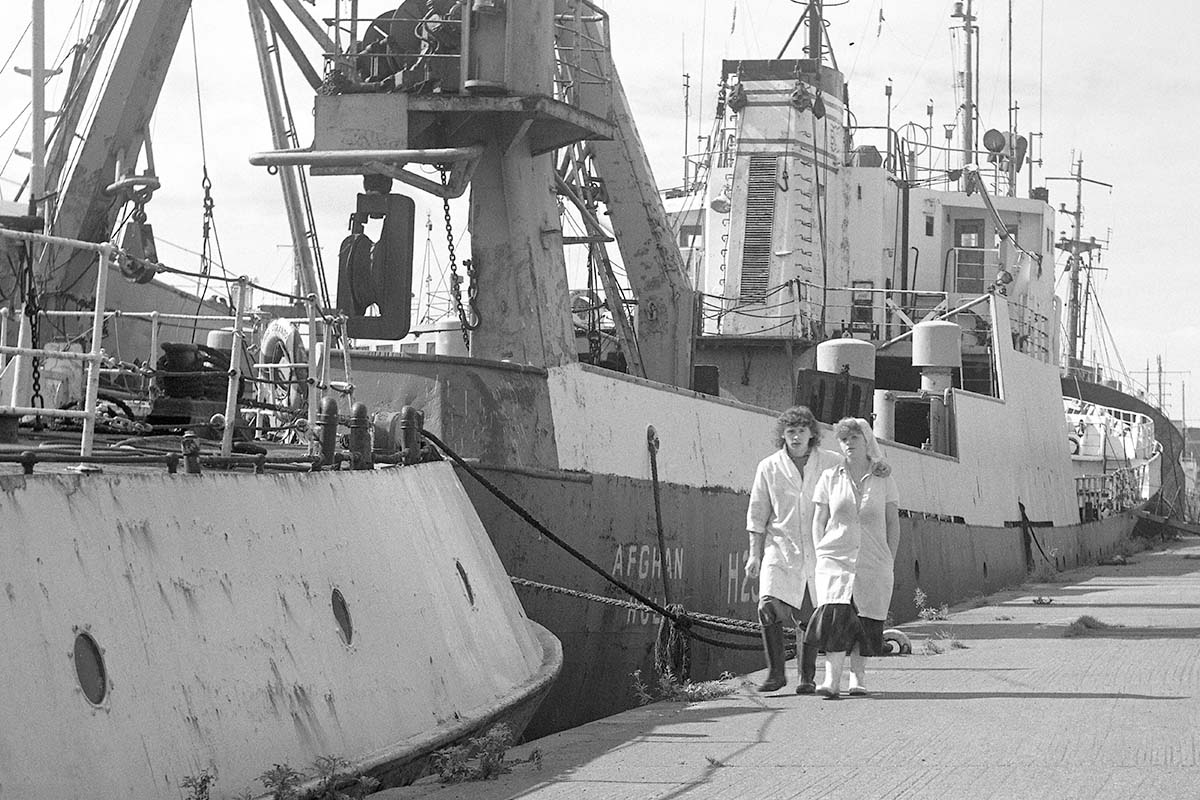 Dockside lovers: I like the juxtaposition of this row of idle trawlers and the young couple. He has his arm around her shoulder, and they both have a mass of curly hair. Close by is the freezer trawler Afghan H 237 – built in 1963 for German owners and called Blankenese. In 1969, she became the Ranger Boreas SN 14, and was then the biggest factory trawler in Britain. Hellyer’s bought the vessel in 1975 and renamed her as part of their ‘tribal’ fleet. She was broken up at the Blyth scrapyard in 1979. Let’s hope this couple’s relationship fared better. 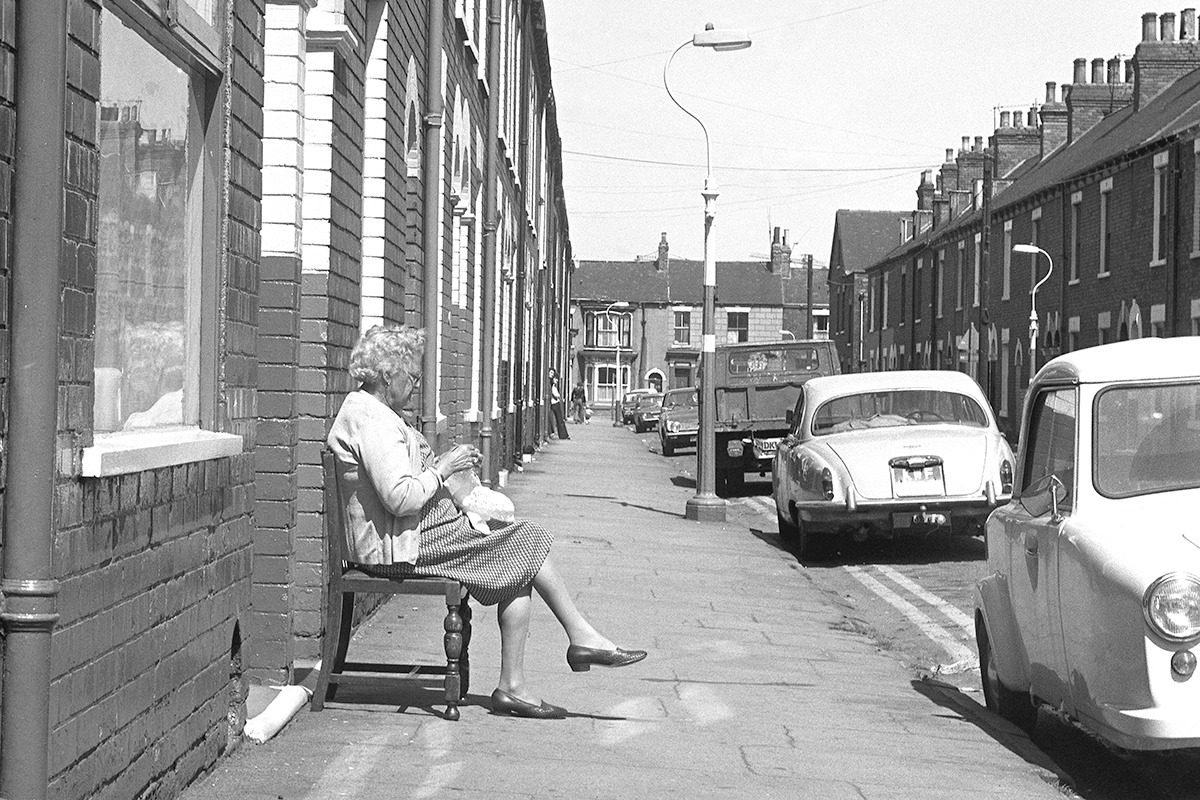 Net braiders: By the time I began my Hessle Road photo work around 1971, women no longer sat outside their houses braiding trawl nets. I have since written about how the braiders were part of the colourful culture – especially in the summer months, working in the terraces late into the evening. Trawler firms delivered big balls of twine to the houses, and at the same time collected completed codends or bellies of the net. I am not sure if Mrs Turner of Gee Street ever braided nets, but I was delighted to see she was doing her knitting out in the street. 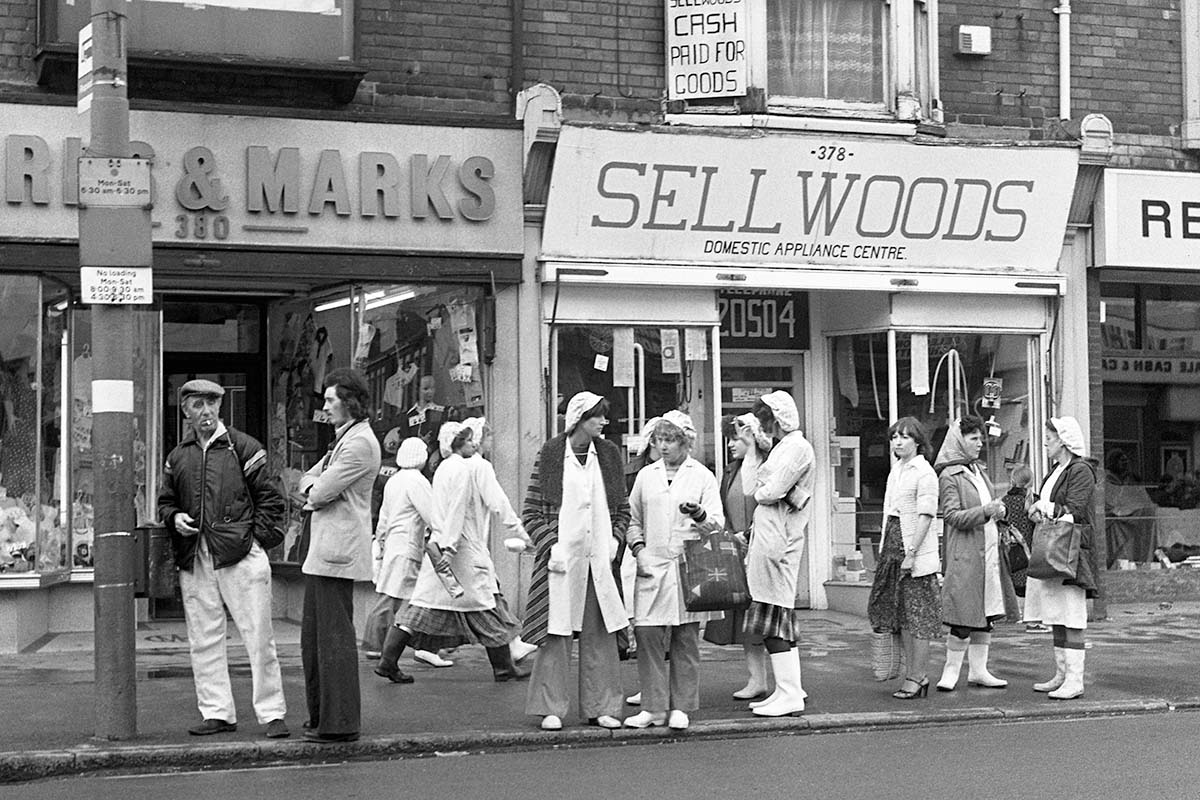 Bus-stop queue: Fish-factory girls had to travel by bus to get home. After their homes had been bulldozed and they had been moved to new housing estates in East Hull, many had to take two buses to get home. People who had been moved sometimes took the two buses back to Hessle Road to do their weekly shop and chat with their former neighbours. 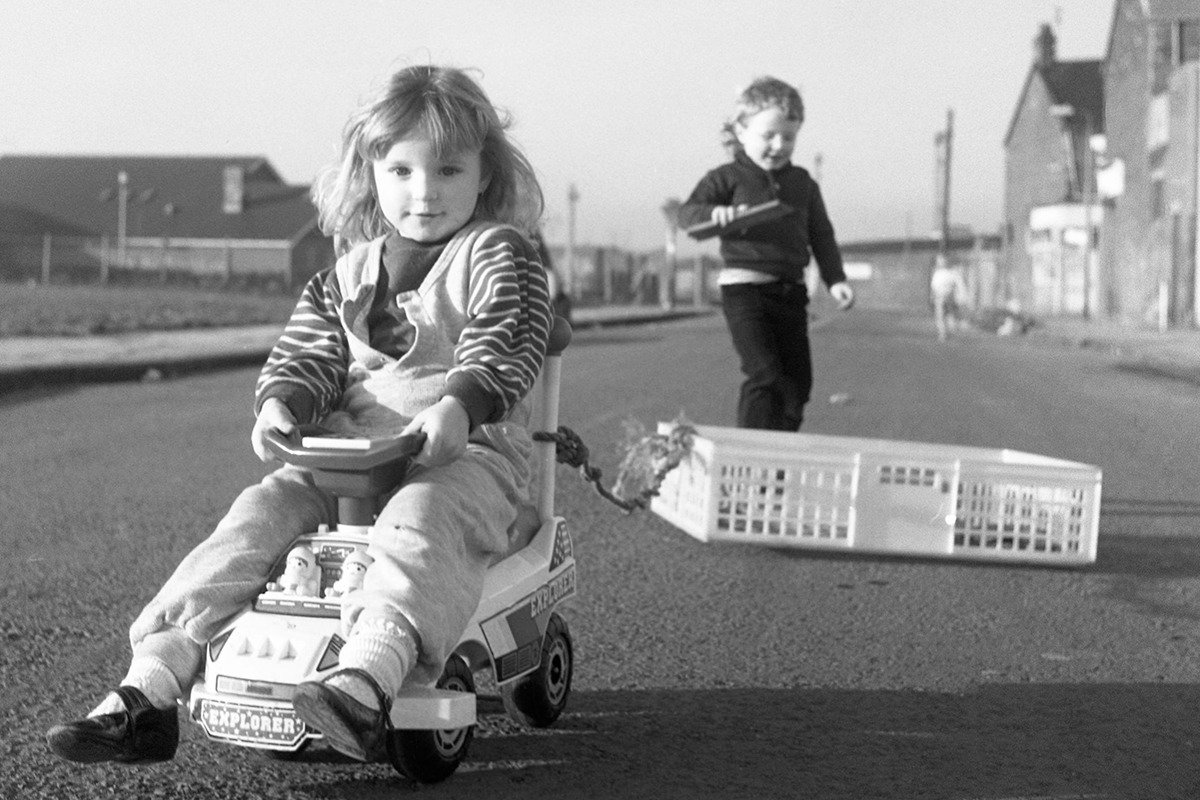 Freedom of the streets: The fish dock itself was an unofficial playground for kids. Here, however, these two youngsters are dragging a fish or bread box along an empty street. Behind the girl can be seen the cleared land where homes once stood. My psychology professor Alan Clarke once highlighted how, generally, middle-class children played in gardens, but working-class kids had ‘the freedom of the streets’. I took that up as a theme in my documentary work. My first solo exhibition, in conjunction with the local schools, was called ‘The Kids of Hessle Road’. 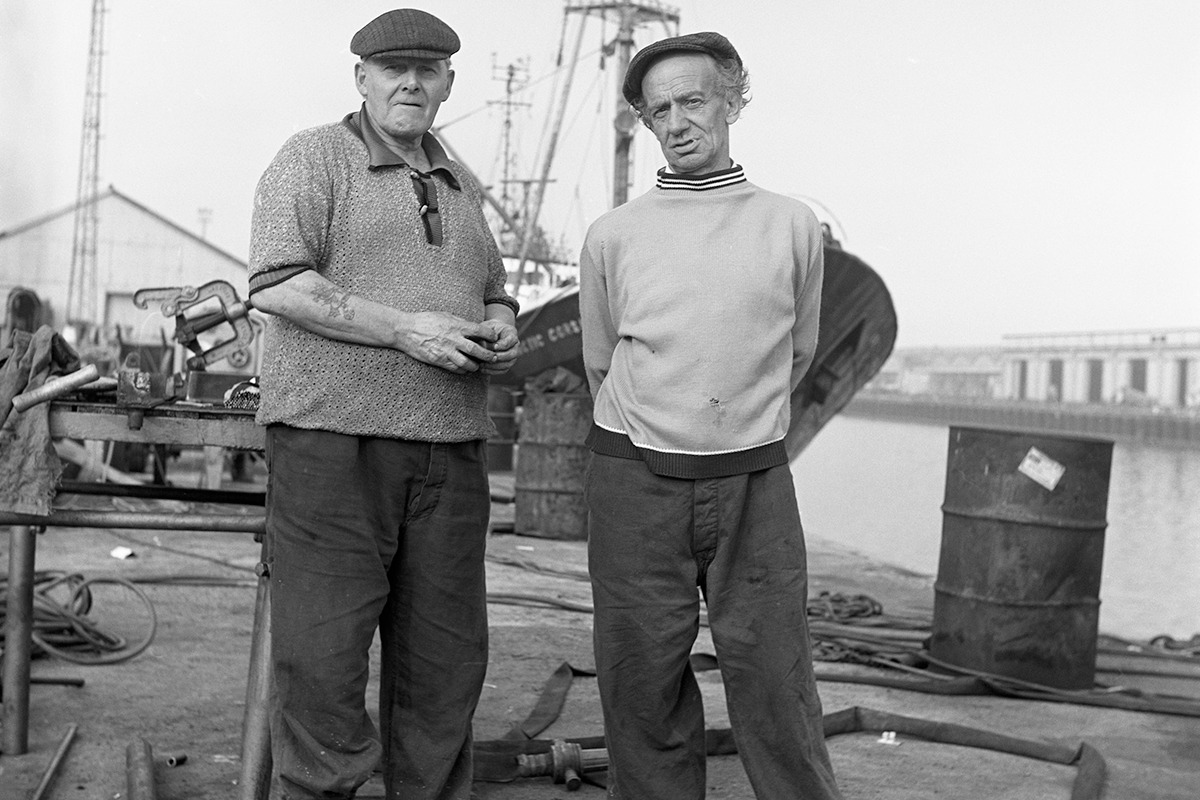 Watchmen: Tommy Foot and Freddie Redfern were watchmen aboard different trawlers that were tied up in the fish dock. Usually, watchmen were retired fishermen who knew the ships inside out. Tommy has his right trouser leg tucked into his sock – ready for a regular cycle trip to a nearby pub. Freddie, on the other hand (or foot), is wearing slippers. The Arctic Corsair H 320 is in the distance, during conversion to midwater trawling in July 1978. She was later briefly renamed Arctic Cavalier – but public protest had the vessel’s original name reinstated. 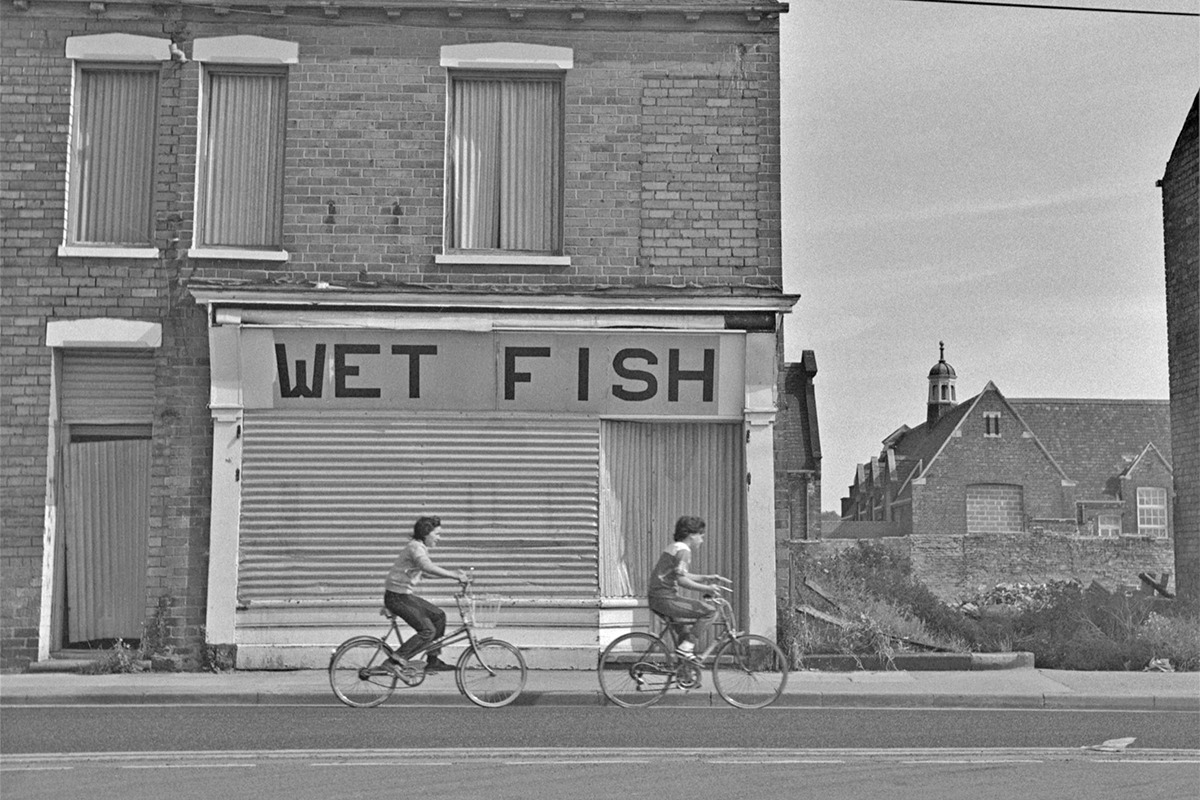 Divination in disguise: “Never wash on sailing day, or you’ll wash your man away.” This superstitious little ditty had a powerful impact on the community. Sailing-day taboos inhibited the women’s behaviour more than the men’s. Women were neither allowed to wave men off nor go down to the dock. The word ‘goodbye’ was never uttered. Some wives waited 24 hours before emptying ashtrays or sweeping up after their man sailed – otherwise he might be ‘swept overboard’. Folklorists call this ‘mimic magic’, whereby female activities somehow influenced the fate of their men at sea. Lifelong guilt haunted some widows.

This is just a small selection of Alec Gill’s photographs features in the latest issue of Fishing News. For more like this, subscribe now to Fishing News. Please note that some of the above images have been slightly cropped for upload purposes. 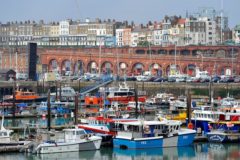 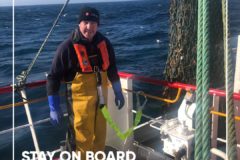