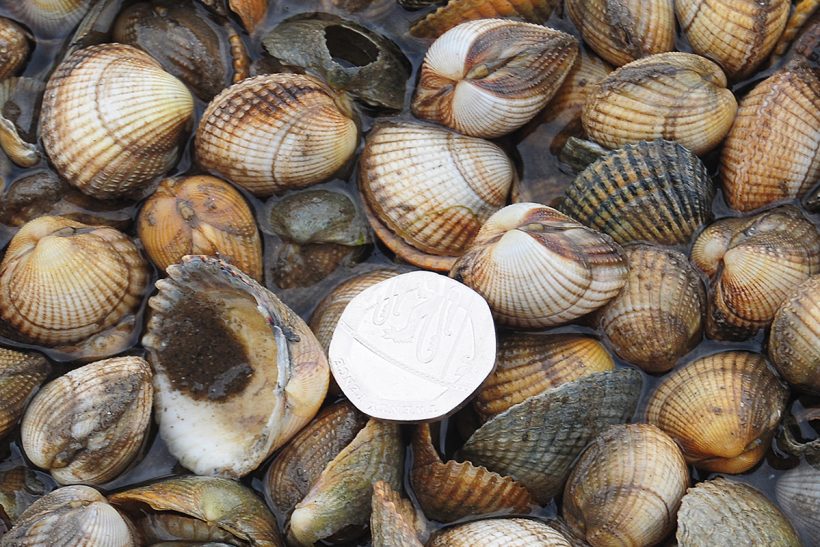 It’s the cockle season again in the two main east coast cockle fisheries, and it’s pretty much business as usual, in structure if not volume, reports John Worrall.

Above: Wash cockles are adjudged adult at 14mm. In the Thames, it is 16mm.

The Wash cockle fishery opened on Tuesday, 20 June, with a TAC of 7,016 tonnes (a third of the estimated adult stock) to be taken at three tonnes per boat per day; a rate that will probably see the fishery last until late October, as long as the densities are there.

It is again being hand-worked rather than suction dredged, dredging not having featured in the Wash since 2008, in line with the preference of a majority of – if by no means all – entitlement holders; not all the boats having – or being big enough to have – dredge gear. The fishery will operate for four days a week, Monday to Thursday, except at neaps when the sands aren’t usually exposed for long enough to make it worthwhile.

But again, for the third year running, the TAC is two or three times the average of the past decade or two, stemming mainly from an exceptional spatfall in 2014, although good growing and survival conditions – notably, not overly-hot summer weather – have helped.

The 2015 TAC was initially set much lower, at 2,079t, but rapid growth in that 2014 year-class brought some of it quickly to harvestable size, and the fishery was allowed to continue until over 5,000t was taken. That was because dense stock accumulations have often seen high losses through overcrowding, leading to ‘ridging out’, and through atypical mortality; a mainly warm-weather phenomenon not entirely understood but perhaps linked to a combination of spawning stress and parasites, which are endemic in shellfish populations.

Despite this year’s slightly smaller overall stock, and thus a slightly lower TAC, there is a higher proportion of adult cockles, even if they are, to some extent, spread more thinly.

And the total Wash take may well anyway exceed the TAC because of a quirk of the governing Wash Fishery Order (due to expire in 2022 and currently under review) under which ground is leased for the re-laying and growing on of mussels. In the recent years of plenty, much of that ground has been settled by cockles, much to the liking of lay holders at a time when the mussel fishery is all but moribund, and because lays are part of the Several – rather than Regulated – fishery, cockles settled thereon are deemed the property of the lay holders and do not count against the TAC. Thus, those lay holders get a bonus share of the wild stock settlement without the labour or expense of laying, much to the dislike of non-lay holders.

That does, of course, raise the question of the provenance of each cockle landing and whether it should be included in the TAC, but Licence Condition 8 attempts to prevent misrepresentation by stipulating that boats cannot fish cockles in the Regulated and Several fisheries on the same day. But then, in a year of plenty, not many would want to do so and meanwhile, another good settlement of spat in 2016 augers well for the next couple of years.

The Thames Estuary cockle fishery differs from the Wash in several respects.

The most obvious is that it is still a dredge fishery, but it also covers a bigger area, fanning out to embrace the Blackwater estuary to the north and the Kent foreshore to the south. And it is, in fact, two separate fisheries, the outer flanking fringes constituting the ‘Permitted Fishery’ which opens only occasionally when stocks are deemed adequate, while the wedged-shaped ‘Licensed Fishery’ covers the larger part of the estuary.

The Licensed Fishery is the main event, but the much smaller Permitted Fishery will actually open this year, for the first time since 2014 (and before that in 2009). It used to open regularly and was an important second option for Wash boats, and whenever it opens now, however briefly, Wash boats apply for a permit and go cockling in order to maintain track record, because that track record may assume greater significance in future.

Which isn’t much, particularly for any Wash boats wanting to participate, because they have to fit dredge gear and then steam 12 or 15 hours each way, having first passed an inspection to ensure the boat is clean and not carrying infection – all for 11 tonnes of cockles.

But it all comes down to that track record, because the much bigger Licensed Fishery, long a highly lucrative closed shop, is governed by the Thames Estuary Cockle Fishery Order 1994, (TECFO), administered by Kent & Essex IFCA, which runs for 30 years. When the TECFO expires in 2024, the Thames cockling game may – or may not – change fundamentally.

For this year, the TAC for the Licensed Fishery is 4,053 tonnes, two-thirds of what it was last year, and the lowest TAC set in the history of the TECFO, although it will be reviewed as the fishery progresses. The lower level is put down to a relatively low stock of adult cockles but a big settlement of 2016 spat – paradoxically the biggest in the history of the TECFO – should more than redeem the balance over the next two years.

The TECFO fishery also has a fixed beginning and end, and this year will open at 0900hrs on 26 June and close at 1200hrs on 29 September, with the season divided into weekly fishing periods each running from 0900hrs on Monday to 1200hrs on Friday. During these periods, licence holders will be permitted to make two landings, each again of 13.6 cubic metres, or roughly 11 tonnes.

More particularly, the fishery will again be limited to just 14 boats, as it has been almost from the inception of the TECFO, and it will be the same 14 boats because, crucially, there is a provision in that Order that those who held a licence in any year automatically be granted a licence for the succeeding year. No other licences have ever been granted, despite regular applications – 10 fishermen applied this year and eight last year.

That can’t be a question of stock management. Simple arithmetic shows that, even with the lowest TAC on record, stocks are at least adequate: 4,056 tonnes divided by 14 boats equals 290 tonnes a boat, and that for a two-day week over three months. Nor can it be environmental, because a TAC is taken by a certain number of dredge hauls, and the number of boats doing the hauling doesn’t change the impact.

By contrast, the Wash fishery this year has another – by its standards – big TAC, of 7,016 tonnes and that could be shared by up to 62 boats – the number of Wash Entitlement holders – which amounts to 113t each. If that works for 62 Wash boats, there must be room for more boats in the Thames fishery; even more so last year, when the TAC was half as big again at 6,160t. But still, only the 14 licences were granted and to boats which, anecdotally, don’t do much for the rest of the year. But then, at that rate of return, they don’t need to.

Whether anything changes when the TECFO expires in 2024 does remain to be seen, but it is one reason why boats flock to fish the Permitted Fishery when it opens, even for one trip; and why some keep applying for the Licensed Fishery, even though they are routinely rejected – because if and when the present regime/closed shop breaks down, track record may be needed to get a look in.

But in the meantime, given the huge disparity between yield per boat in the Wash and in the Thames Licensed Fishery, would someone from KEIFCA like to write in and explain whether there are indeed fishery management or environmental reasons for excluding more boats, or is it simply the case that a wild fishery has been allowed to be commandeered by a cosy cartel? Just wondering. 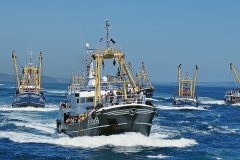 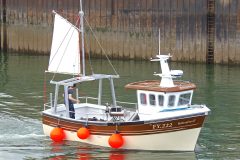