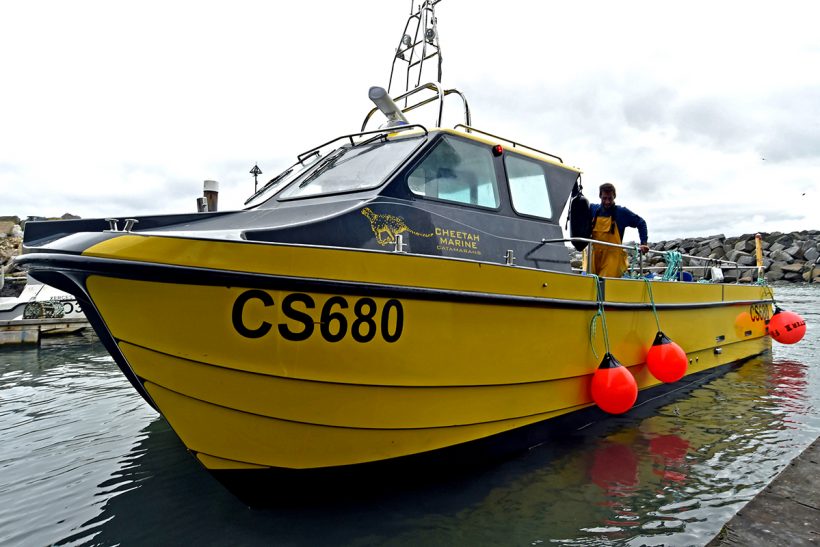 Above: Mooring up ready to unload brown crab – note the paintwork on Venturer which is a non-fading base colour with colour wrap, giving the boat a contemporary look.

Times have not been easy for Geoff Blake, who has invested heavily to develop his business. “We have seen some of the hardest times during the past 10 years, which has caused some worries for us all. We can only hope the next 10 will be a lot easier,” said Geoff’s son, Ed Blake.

This has not deterred the Blake family, and Geoff has recently invested in Venturer CS 680, a new 9.98m Cheetah Catamaran with a wider 3.7m beam.

Geoff Blake said: “I have been using Cheetah since they first started to manufacture on the island. Their catamarans are strong, light in weight, well-built, and handle well in the very inclement weather (up to force 8) that I go to sea in at times.

“Venturer will be joining our existing Cheetah, Ventnor Pride 11 CS 644, which is coming up to 18 years old, and still going strong. Both boats have identical outboard engines, haulers and power packs, so that we are holding identical spares, and the skippers and crews are well-versed in the setup on both boats.

Part of the new design is the fitting of Mercury SeaPro engines, which are mounted on hydraulic jacks to improve fuel efficiency. Boat designer and builder Sean Strevens said: “The portajacks take the 2 x 67kW Mercury engines. By doing this, it increases deck space and gives Geoff the ability to jack them up in the air hydraulically for easy maintenance – either in the harbour or on the beach.”

Geoff Blake added, “In calmer seas, you can lift the engines vertically to reduce drag. Alternatively, lowering the engines gives better grip in rougher seas. Another important advantage is that should any rope become entangled in the propeller, you can lift the engine vertically out of the water for easier access, even in rough seas. Jacks are not included in the measurement of the boat, whereas pods are. This means that the full usable deck space can be utilised.”

Weight is important, and with fast boats it’s not about how much horse power you can have, it’s about being able to keep the weight down. Geoff, with 134kW, cruises all day at 20 knots without any problems. They often go out 23 miles to the centre of the Channel grounds – which they can fish in slack water – turning the whole thing around in approximately five hours. Weather plays an important part in their working lives, and if things happen to change, they know that the Cheetah design will handle most inclement conditions well.

“We can haul 200 pots, leaving current situation, economy is what running a business is about. We have fitted a Spencer Carter 1.5t slave hauler powered by a Yanmar 3YM20 power pack fitted with a deck wash. This is fitted below deck, port side, keeping the centre of gravity aft and low; perfect for rough-weather fishing.”

The decision was made to run two boats, and Ventnor Pride 11 has an uncapped licence with bass entitlement and shellfish, which is essential to business survival. Ventnor Pride 11 is now skippered by Lorne Gardner, who is a second-generation, local fisherman.

Geoff continued, “Ventnor Pride 11 has become a bit of an icon with its striking yellow colour, and we wanted to replicate that with Venturer. However; the new yellow gel fades, so Sean Strevens of Cheetah suggested we go for a non-fading base colour and wrap it. This lead to a grey gel (which is colour-matched to our Hilux), and the yellow stickers. I think it’s turned out brilliantly and gives the boat a contemporary look.”

The Isle of Wight is famous for its local brown crab, and its crab and chips (an island speciality) are very popular, especially during the tourist season. “With proposed plans for a Tidal Energy development, we have had major concerns regarding its future. I am glad to say the development has currently been shelved, after a lot of protest from the fishing communities and other parties – we are keeping our fingers crossed,” said Geoff.

Brown crab is still the lifeblood of Ventnor Haven Fishery, and for the past eight years, John Ridout, their driver, gets the 1am ferry off the island and drives to Paignton in Devon, then on to Brixham fishmarket for 5am, to drop off the catch of crabs, lobsters, Dover sole, and bass. He then collects bait, new ropes, and pots from Mike Cornish, who serves them well when it comes to supplying these items to be collected each day, so John can catch the return ferry on time and be back on the island by 10am.

“One must remember that island life is somewhat different to mainland life, and it adds extra expenditure in ferry and fuel costs,” said Geoff with a smile.

Another local Isle of Wight fisherman, Sid Stretch, has recently retired. A real character, Sid started fishing in the mid-1970s from Bembridge, and latterly Ventnor, with his white Cheetah, aptly named Mardeshar CS 671 after his wife Marion and daughters Denise and Sharon.

Family life is what fishing is all about. Ed Blake, son of Geoff and Cheryl Blake, took to the business in 2012, after leaving school. He now runs the shore side of the organisation. Cheryl runs the wet fish shop that is open seven days a week, all year round. As well as that, she oversees all the trade deliveries on and off the island, which is a huge growth market for Ventnor Haven Fishery.

Fishing is important to the island’s community too, as those involved provide fish to the many hotels and restaurants. However, it is very seasonal, and other markets have to be found, especially on the mainland. To do that, one has to invest, and that is what Geoff has done by adding a new Cheetah catamaran.

“We are lucky that they are built on the island. Cheetah Marine has a wonderful reputation as boat builders. Sean Strevens was himself a fisherman, so he has been able to design his boats with a wealth of experience behind him. Cheetahs are developed to be reliable workhorses, that can be operated in many working environments.

“With Venturer, the wheelhouse is compact and fitted-out with the latest Simrad electronic systems. There is also room behind, even with a seat, for my dedicated crew member John Stickman to prepare the shellfish for unloading on our return to Ventnor. It helps keep him dry and comfortable,” added Geoff.

Ed Blake does worry about the future, and, like his father, does have a few restless nights. “One of our main concerns, as is the problem for all the inshore fleet, is the lack of youngsters coming into the industry. We point the blame at the governing bodies putting so much red tape in the way, creating barriers to them starting a new career.

“Whether it’s restrictions linked to regulations on boat-building, or constant rules as to what you can catch, it adds more hardship. Most authorities seem to take the harshest interpretations of the laws and measures. We can only hope that once we leave the Common Fisheries Policy, a new, fisherman-friendly body is put into place to manage sustainable growth in the industry, and not one that seems hell-bent on ridding the sea of the inshore fleet, in favour of the pelagic vessels.”

He continued, “At the current rate, there will be more law enforcers than fishermen. We are law-abiding fishermen who want a sustainable future because we want to be able to catch something next year. What we object to are the ridiculous levels of paperwork and jurisdiction that are taking up more time every month, most of which is meaningless, with little tangible effect.”

Geoff Blake has worked hard, with a lot of financial investment, to develop Ventnor Haven Fishery. It has had to diversify to survive. Fishing is in Geoff’s blood, and it gets him out of bed every day. He has invested more funds in a new Cheetah, when others are leaving the industry.

What more can he ask for?

All he wants is to see it succeed so that his family can continue to enjoy island life as they always have. Ed, his son, has endorsed this by wanting to work with his father; if nothing else, that shows what family commitment is all about. 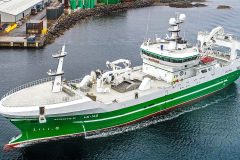 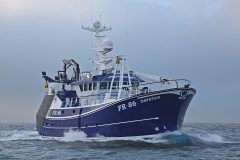