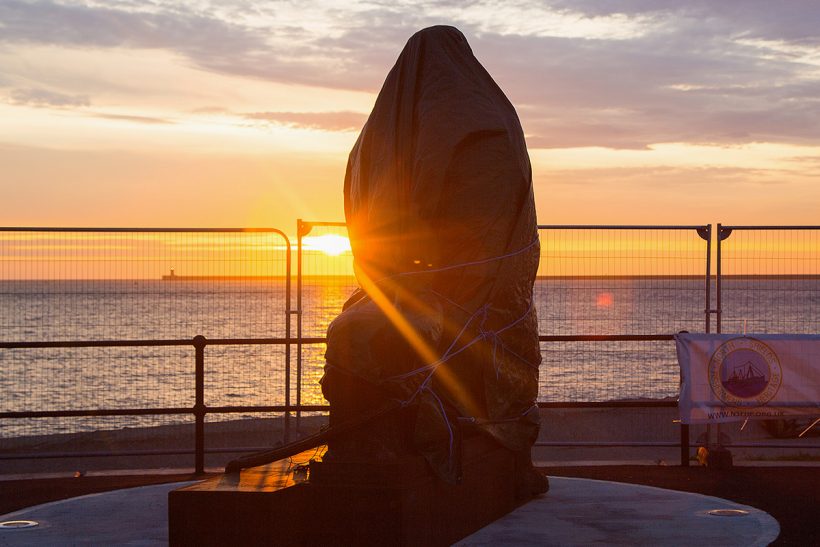 Hundreds of people turned out at North Shields on Sunday, 24 September, to witness the unveiling of a lasting memorial to lost fishermen.

Above: An appropriately dramatic sunrise on unveiling day.

The completed sculpture, named Fiddler’s Green, was finally revealed to the public at its permanent home on land near the sands at the Fish Quay in North Shields.

Fiddler’s Green came about after the North Shields Fishermen’s Heritage Project (NSFHP) was formed to provide a fitting memorial to fishermen who died doing their job after leaving the port of North Shields.

Thanks to the generosity of the community and local businesses, including the working fishermen of the port, as well as support from North Tyneside Council, Places for People, and Urban Splash, the £75,000 needed to make the idea a reality was raised in less than a year. 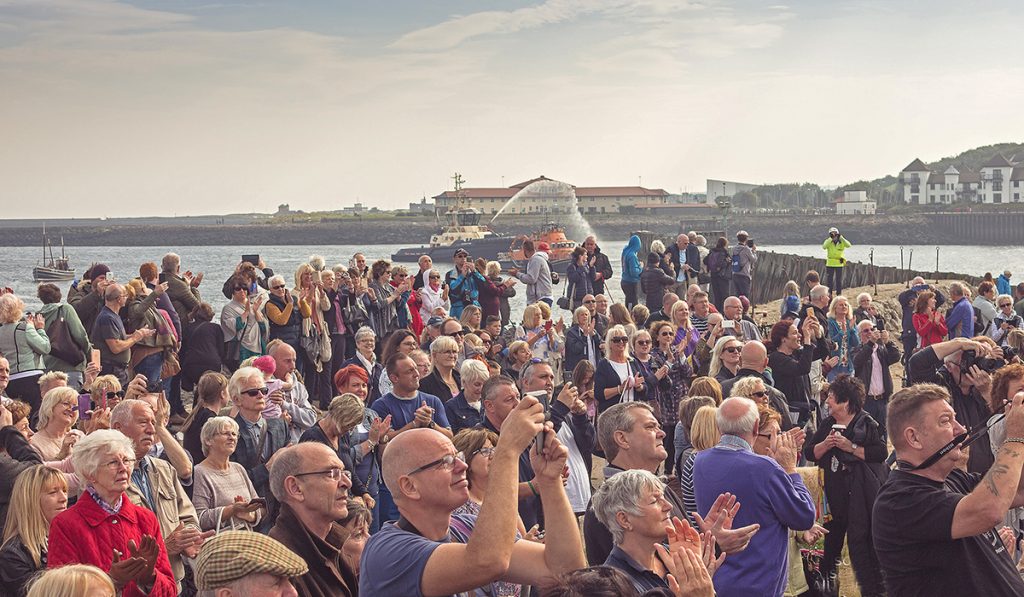 A large crowd gathered for the unveiling of the memorial, as well as an RNLI lifeboat, heritage fishing vessels, and tugs.

Vice chairman of the group, Henry Howard, who came up with the idea after his granddaughter told him there should be something to honour lost fishermen, said: “It’s been a really proud day for me to finally see the memorial for lost fishermen unveiled. I’m prouder still to have been able to make my granddaughter’s wish come true – she will now see a memorial to the fishermen who never came home.”

Crowds flocked to catch a first glimpse of the awe-inspiring 10ft 6in sculpture during the special ‘Fiddler’s Green Day’ celebration event, which also featured live music, heritage fishing boats and a tug spraying water cannons out on the river. There were a number of speeches from some of those involved in the project, which moved many in the crowd to tears. 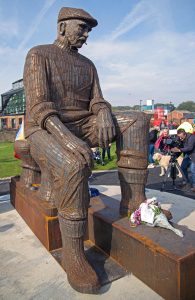 Renowned sculptor Ray Lonsdale, the man behind the famous ‘Tommy’ sculpture in Seaham, was tasked with creating the memorial, which was inspired by an image of a fisherman taken in 1959 by local photographer Harry Hann.

Ray Lonsdale said: “Fiddler’s Green is one of the larger pieces I’ve done, and it’s been interesting for me to tackle a different area like the fishing industry. I’ve really enjoyed doing it.

“Memorial unveilings are always a bit of a nerve-wracking time for me, because of the sense of anticipation, and you just don’t know what reaction you’ll get when the covers come off, but I was delighted that the feedback at its unveiling was so positive.

“It’s a privilege to have worked alongside a fantastic team who have worked tirelessly to make this day happen – I salute them for their commitment to this project.”

The sculpture was officially unveiled by North Tyneside’s Elected Mayor Norma Redfearn and Julie Myhill, whose partner James Noble was the last fisherman (along with two of his Filipino crew) to lose his life after leaving the port of North Shields in November 2014.

Mayor Norma Redfearn said: “I am delighted that, thanks to a real community effort and support from local businesses, the £75,000 was raised to create this important memorial. Congratulations and thanks to everyone involved.

“It looks absolutely fantastic set against the stunning backdrop of the sea, the piers and the mouth of the Tyne.

“The sculpture is a fitting tribute to those who lost their lives just doing their job – people will travel from far and wide to see it, and this is a great way to support the ongoing regeneration of the Fish Quay.”

Julie Myhill added: “There are memorials all over the country, but there’s been nothing in North Shields until now. James has a plaque on the fish quay, but I am over the moon that there is now somewhere for me to come to at the seafront to think of him.”

For members of the NSFHP, some of whom have lost family, friends and colleagues, the event proved highly emotional, and marked the culmination of many months of tireless work and fundraising.

Alan Campbell, Tynemouth MP, also addressed the crowd and said: “Well done to the North Shields Fishermen’s Heritage Project, and to everybody who contributed to getting this memorial, which is long overdue, here at last. It is a massive team and community achievement that we should all be very proud of.”

It is hoped that the memorial will not only provide a place of remembrance for families still involved in the fishing industry, but also become an example of ‘destination art’, and boost tourism and businesses in the area as well as adding to the ongoing regeneration of the Fish Quay. 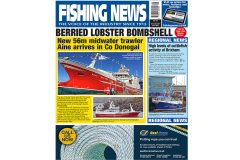 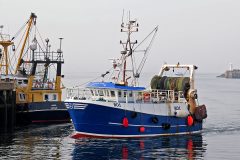