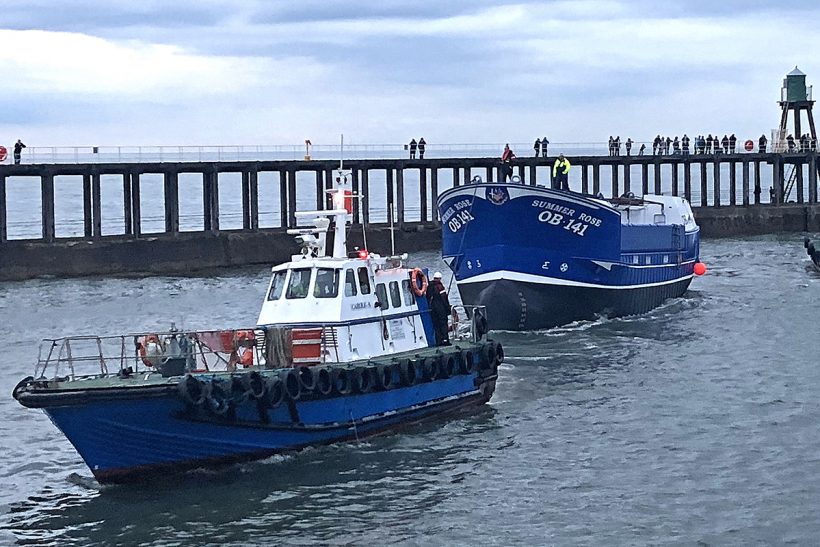 Whalsay skipper Allister Irvine and partners of the Zephyr Fishing Company Ltd have signed a contract with Larsnes Mekaniske Verksted AS to build a new 75.4m midwater trawler for delivery in the summer of 2019, reports David Linkie.

Above: Summer Rose arrives at Whitby after a short tow from Middlesbrough

Ordered to replace the owners’ present 72.8m pelagic vessel Zephyr LK 394, the new Zephyr is designed by Aalesund specialist naval architects Skipsteknisk AS and is based on an ST-125 hull developed for efficient operation in frequently challenging North Atlantic waters.

Of 75.4m LOA, breadth moulded 15m and a depth to shelterdeck of 9m, the new Zephyr will be arranged for pumping pelagic fish at the stern and feature a full-length boat deck.

The design, specification, and arrangement of the new Zephyr are the result of extensive and close cooperation between the owners and two of the leading designers and shipyards in Norway. The main focus has been set on optimising working, safety and comfort for the crew, together with catch-handling, storage facilities, and fuel consumption.

In order to reach these targets, the vessel’s machinery and equipment will incorporate the latest technology, with suppliers chosen carefully to match specification and requirements.

Pelagic fish will be stored in 12 RSW tanks with a combined capacity of 2,500m³.

Vision IV rolled out at Macduff

With 7.4m of beam and a moulded depth of 4.2m, the fully-shelterdecked Vision IV has been designed and built by Macduff Shipyards Ltd for skipper Zander Jack and Vision LLP.

Vision IV features a Mitsubishi main engine, Reintjes WAF 474 gearbox of 7.5:1 reduction and a 2500mm-diameter propeller turning in a propulsion nozzle forward of a triple rudder.

The shipyard manufactured most of the vessel’s deck machinery package, including the customary three-drum trawl winch, housed in a dedicated winch compartment on the main deck forward of the main catch-handling area amidships. Two split net drums are mounted on the enclosed quarter. Two Thistle Marine deck cranes are also fitted.

Launched at an advanced stage of completion, Vision IV is expected to run sea trials towards the end of the year.

McMinn Marine of Fraserburgh supplied and installed the wheelhouse electronic equipment, while the trawler’s twin-rig net monitoring system is from Scanmar UK.

Since Vision IV was moved out of Macduff Shipyards’ main fabrication hall, the already fabricated hull modules for a 24m seine netter for Fraserburgh skipper Bruce Buchan are now being assembled.

On completion of fishing trials off the Danish coast, Keila is expected to arrive at Westray soon, after calling at Fraserburgh to box and take on new fishing gear.

Fishing activities on the new Keila will be focused towards the stern of the full-length shelterdeck, with catches being bagged over the transom on the vessel’s centreline.

Rapp Marine Ltd of Peterhead has supplied the vessel’s complete hydraulic package, including the pumps driven by two PTOs mounted on the gearbox. The bespoke deck machinery includes two large split-trawl winches located on the forward half of the shelterdeck under the boat deck, two 2 x 12t split net drums situated towards the stern, and two 8t bagging winches.

Keila is designed to carry around 1,400 boxes in the step-free fishroom, 31,000 litres of fuel, and 20,000 litres of freshwater for domestic and ice-making requirements.

Twenty-four hours after floating off the launch cradle into the River Tees at Middlesbrough (Fishing News, 26 October), the new 20.3m automated scalloper Summer Rose OB 141 arrived at Whitby, where the vessel will now be fitted-out by Parkol Marine Engineering, reports David Linkie.

Summer Rose is scheduled for completion next spring. 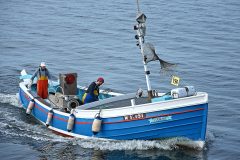 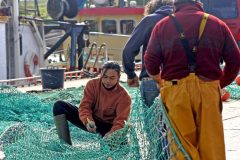 No abuse of non-EEA crew in N Ireland