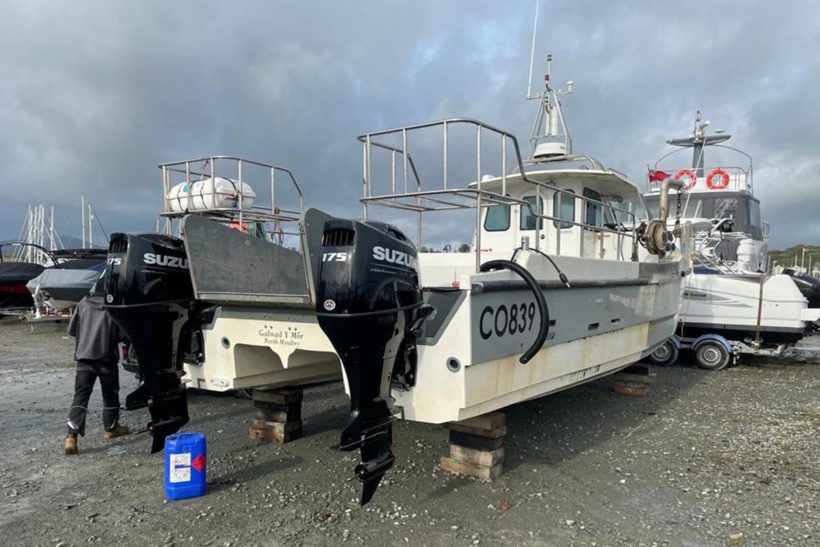 Stephen Harrison, owner/ skipper of the catamaran Galwad Y Mor, told FN: “The general shortage of engines across the UK, and delays in delivery times, has made like for like replacement of the engines stolen from my vessel impossible in the short term.

“Thankfully both the RSS [Registry of Shipping and Seamen] and the Welsh government have been more than helpful in finding an interim solution, whilst new engines of the right specification are sourced – in the case of the stolen Hondas, this will not be until March or April of next year.

“I am back in the water, and have managed to get my gear in ahead of the forecast storms. A couple of the smaller boats, unfortunately, have their gear ashore, through help from others, but now won’t be back fishing until March, given the delay in sourcing engines.

“Other fishermen may be interested to hear that in my case, the thieves cut around the outboard saddle, and left the four locks I had in situ. Although remote, the area is popular with hikers, and clearly this particular theft had been planned in advance.

“There may also be an issue with insurance with one of the vessels affected as well. It really is vital for us fishermen to use as many locks as possible when ashore, to keep the engines safe.

The stolen engines haven’t yet been located. All we can do is say a huge thanks to everyone who has rallied around and offered us support: suppliers, fellow fishermen, the RSS and the Welsh government, in a bid to get us all back to sea, and earning a living, as soon as possible.”

The six vessel owners working the port now face additional costs – on top of lost earnings, the stolen engines and the time and effort needed to re-engine the vessels – of an additional £1,000 a year each to maintain new security at the site.

A new security mast, complete with floodlights, loudspeakers and CCTV linked directly to a security company, are now in place at the site, at an annual cost of £6,000.

“Although this is classed as an Area of Outstanding Natural Beauty, the National Trust, as landowner, was quick to give approval for the new security cameras. We are just now awaiting confirmation from our insurance companies that we will be covered moving forward.

“In the meantime, we can’t say enough thank yous to the many fishermen around the country who have offered to lend us engines in the short term, to help us out. They, and the officials in Welsh government, RSS and similar, have gone out of their way to help get us back on our feet again.” 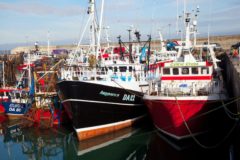 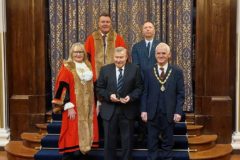