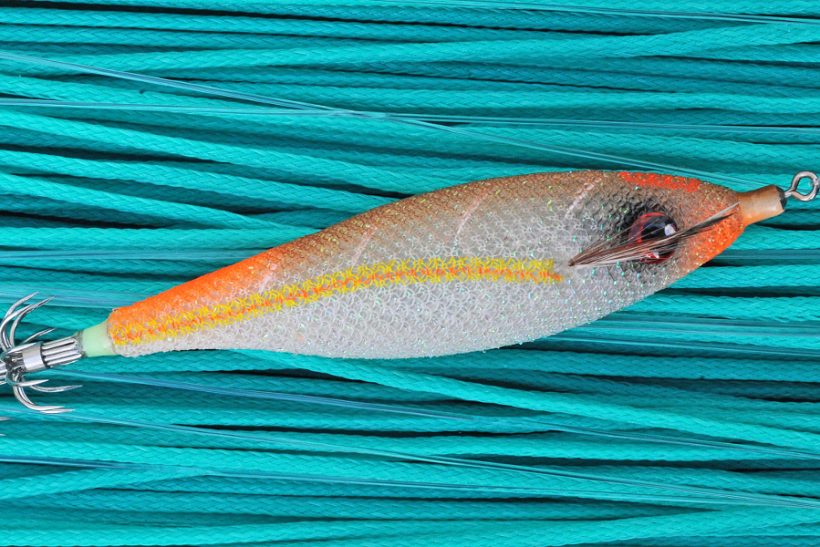 Should I have gone to Specsavers?

Most small-boat fishermen of Cornwall are going through the ‘famine’ part of the old saying ‘feast or famine’, yet the lucky few able to fish close to the rocky ‘edges’ in offshore westerly wind have found enough squid to make a profit

However, looking at the region as a whole, and considering all other small boats along the south coast of England, Wales, Scotland and Ireland too, another saying springs to mind: “If you don’t like someone, give him a fishing boat; and if you can’t stand him, give him a wooden fishing boat!” I rest my case, and back to squid-talk. 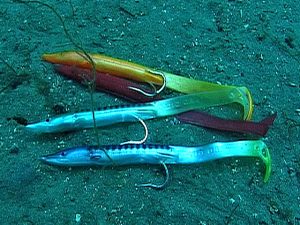 At just 20ft deep, the main bright colours are greatly reduced. After 30ft to 40ft, there will (to the human eye) be no red left. Here, the bright red eel – second down, and tucked under the top eel – is dark purple and on its way to becoming black at 30ft to 40ft.

As I said in the last diary, when I spoke to Ed Russell at his warehouse at Looe (Ed is a serious line-fisherman and owner of the gear firm, Fairwater Fishing), we chatted about squid gear, and the rigging of traces was discussed.

However, jig colours remains a prime topic and in Squid Diary 7 (25 January), I mentioned my experience of using red jigs – turning upside-down my general rejection of bright colours.

Since my embarrassing trials of ‘red are the best’ jigs, I now accept that the ‘angry’ colour of red, plus other similar colours, can score. It is probably a bit too late in the season to keep squidding all the time, but I will continue for a couple more weeks, since reading my daily diaries of previous years revealed the odd small hit of squid in mid-February.

I then preferred using jigs with a surface sheen of silver/blue or sardine scales – or even drab colouring, like greens and/or browns. Dull jigs are/were my favourite for when there are fewer silvery feed-fish, like whitebait, sandeels, juvenile mackerel, sardines or sprat. At such a time, I believe that squid search closer to the shore for fish like blenny, wrasse, juvenile pollack or small bass. I wonder whether CEFAS or ICES have considered that? Squid and cuttlefish are voracious predators, and what will be the outcome of such a huge influx of cuttlefish as there was last summer/autumn around Devon and Dorset shores? Equally, the pressure on – and the outcome of – that stock being reduced by a mass of trawlers is another factor. Will that put a brief slump in cuttlefish stock for 2019?

Radio Four recently ran a fascinating programme all about cephalopods like squid, cuttlefish and octopus, and soon I will share the highlights with you. One thing was very obvious – squid and cuttlefish (and octopus too) are the Hells Angels of the marine world. They live fast and die young!

And because of that, the flesh of those short-lived creatures is a massive factor in the foodstuff of demersal fish and shellfish. So what might happen on the seabed off ‘big’ cuttlefish ports, where thousands of tons are taken each year? The possible outcome may follow the trend in other countries around the world, where the catches of squid, cuttlefish and/or octopus are well known, and linked to fluctuations in fish stocks, the scientists said.

And on that, I remember a day spent many years ago diving/taking video in the Helford river and bumping into a dying cuttlefish. It had just spawned, I guess, and was clearly dying. Wee fish and crab were chopping away at the poor creature while it was still alive. The fins were almost gone, and tasty chunks from one of its arms had already been taken. It was a sad sight, but a reminder that in the sea, one creature’s loss is another’s gain. I digress; back to jigs and the colours in question. 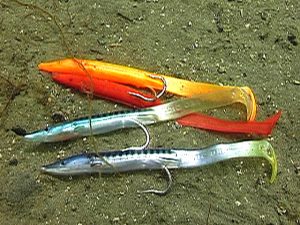 When a light orange filter is placed in front of the lens, to the human eye normal daylight colours reappear.

My drab jigs include the Yamashita ‘naturals’ in the Totto Sutte range, or in the DTD range, the ‘natural weaver’ from the ‘wounded fish’ range works very well. So much so, that they are like gold dust to obtain. DTD also has the Premium Bukva range, where ‘brown’ appears a superb colour mix, and I recently bought some to try. While the jig gives me a wee bit of dull colouring, there is a really bright streak of orange, and they have caught.

We already know that red brings anger to a lot of animals – my rescue parrot, Fara, being one. Being a Congo African Grey, he has a considerable degree of attitude – and no wonder after the way he was treated in the past. My kindness now provides him with a life of luxury, but I would never hold Fara when wearing my red-arm smock.

I did once and suffered badly for several days from a serious bite. I’m not sure whether Fara is a he or a she, but apparently he came straight from Africa and, unlike a parrot bred and raised in captivity, had some degree of parental teaching. I often take pictures of Fara and post them on my Facebook page. The simplest way to get his eye of anger is to show him something red, like a red squid jig, for 30 seconds. Anything red that he can grab hold of ends up in tiny pieces in no time at all. He didn’t get the jig!

The same red trigger occurs, I believe, with pollack, where red sandeel lures or sidewinders are often the winners over black, blue or green. The same is true of other fish – either sea fish or freshwater fish, like pike or perch. They love lures that have a streak of red.

But for one moment let’s consider the colour red to the human eye. Not on land, but underwater, when at any greater than 30ft to 40ft in depth, red doesn’t exist. Why?

Some time ago, to show this, I took three different colours of the famous Red Gill eel underwater. The trials took place in – guess where – the Helford river. That place should be renamed as a flume tank – it has a fairly constant flow and, for most of the outer part (other than a small pit of 60ft in depth), the seabed of the Helford river lies between 20ft to 30ft from the surface. 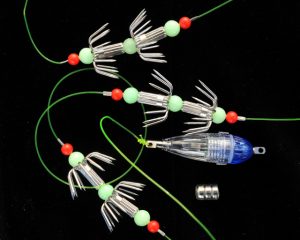 A very interesting way of providing a multi-jig trace, but in-line rather than on snoods. John Dean has made and sold ‘many’ such traces ‘worldwide’.

The two pictures show the eels at a depth of just 20ft, where the real ‘punch’ of red has gone – compared to the other picture, taken when I held a light orange filter in front of the lens, when we are back to land colours. Are daylight colours seen by the human eye captured by squid through some sort of biological orange filter? Scientists say not.

In the spectrum of light, red has the longest wavelength; seawater (and freshwater too) quickly filters-out that colour. As you go deeper, then the other colours go too, and at 60ft and beyond, without an underwater torch at hand, you see nothing more than blue/green and black.

So, past 40ft in depth, the red wavelength has gone. Cut yourself when underwater – a common accident when foraging around for scallops – and the blood appears black.

It is anyone’s guess why squid and cuttlefish – and many white fish and pelagic fish too – react to the colour of red. Scientists know that squid, cuttlefish and octopus ‘talk’ with red/brown messages on their skin (mantle); let’s see what the scientists say. And in the next Squid Diaries, I will travel through the biology of those animals – something I learned when at college (Bangor in North Wales) – or did I?

I should have done, since that was the deal – come to college and listen, do your work and one day you will be an expert! But longline fishing for bass and plaice on the Lavan Sands was far more attractive! I lived at Llanfairfechan and had a wee boat with a British Anzani outboard – a cheaper version of British Seagull. In a spring tide, the Lavan Sands are simply massive, where digging big black lugworm was fairly easy. Dig up the bait on spring tide and salt them down, and fish the lines on neap tides. It was fantastic.

You wouldn’t believe some of the ‘facts’ (of those days) that I heard come from the professors in marine biology – facts that fishermen even then had already shot-down as not 100% true. Scientists then (1971 to 1974) admitted that they had a lot to learn on many species – species that were to become big factors in the fishing industry of nowadays – squid and cuttlefish being two of those species. You can’t keep squid in aquariums for long – you can keep cuttlefish, but not much longer – and in those days grant money for active research at sea was scarce, so scientists were not able to uncover a fraction of what they now know about animals like cephalopods.

I leave you with one of the most interesting moves among Westcountry squid fishermen, one of whom wanted to find an economical way of catching squid. The picture (above left) shows a trace made by South Devon fisherman, John Dean, who makes the traces and has sold a lot ‘across the world’, he told me. John has developed a simple yet rugged rig of lights beads and jig-hooks to make a trace that he’s already found to be a good catcher at ports on the Devon/Dorset border, like Lyme Regis.

In a letter, John wrote: ‘I have used these many times in Lyme Bay, with great success’. They are made and sold for fishing from boats, or fishing in deep areas off rocks or piers.

I have a few to try, and will keep you posted. It might be next season before I do that, and I apologise to both John and you for being less active over this season. I bet those traces work well for cuttlefish too.

Featured Image: A streak of bright orange and a dab of bright red on the DTD Premium Bukva ‘brown’ addresses the wish to use bright colours, but satisfies my preference for using drab colours. 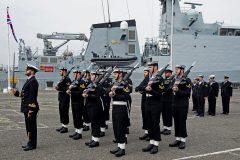 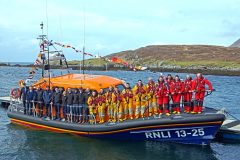