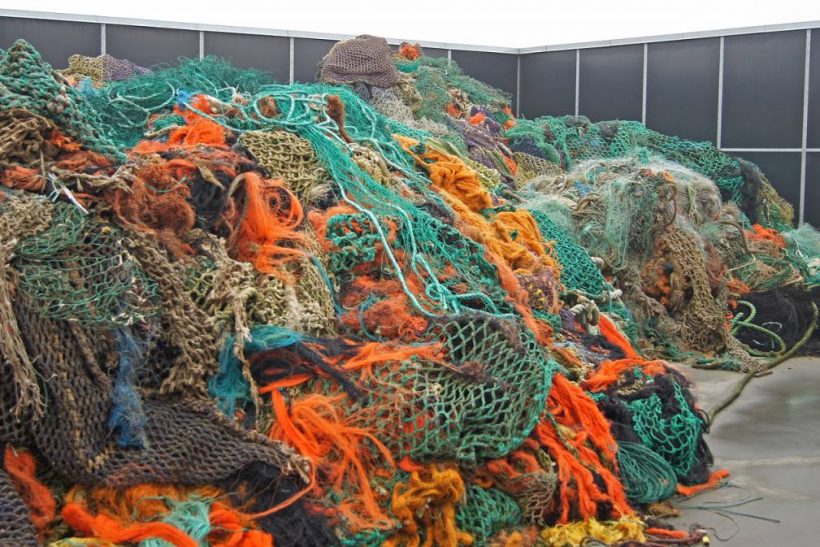 It’s such a sensible idea you have to wonder why it hasn’t been done before. Old netting, both trawl and static netting, has to be disposed of somewhere and with few other options available, much of it ends up as landfill; a less than environmentally responsible way of handling this waste product of the fishing industry.

Above: Trawl netting piled up to be shipped to Denmark for recycling.

Newhaven fish trader MCB Seafood has been working with Danish company PlastiX Global to collect worn out netting, starting with that from the Newhaven fleet. The net is bagged and shipped to Denmark, where PlastiX is able to recycle it, supplying the end product to manufacturers who use it to produce a range of products, from socks to surfboards.

Harry Owen at MCB Seafood in Newhaven, who has a background in marine science and spent years at sea as an observer on a variety of vessels before coming ashore, said that the scheme is of direct benefit to the fishermen. The netting is disposed of at no cost to the fishermen and vessel owners, when normally a business can expect to be paying hefty bills for this to be done by a commercial refuse disposal firm.

He explained that the company has been growing, and the netting disposal scheme, which they plan to roll out to other ports along the south coast, such as Eastbourne and Shoreham, is part of MCB Seafood’s increased environmental profile. 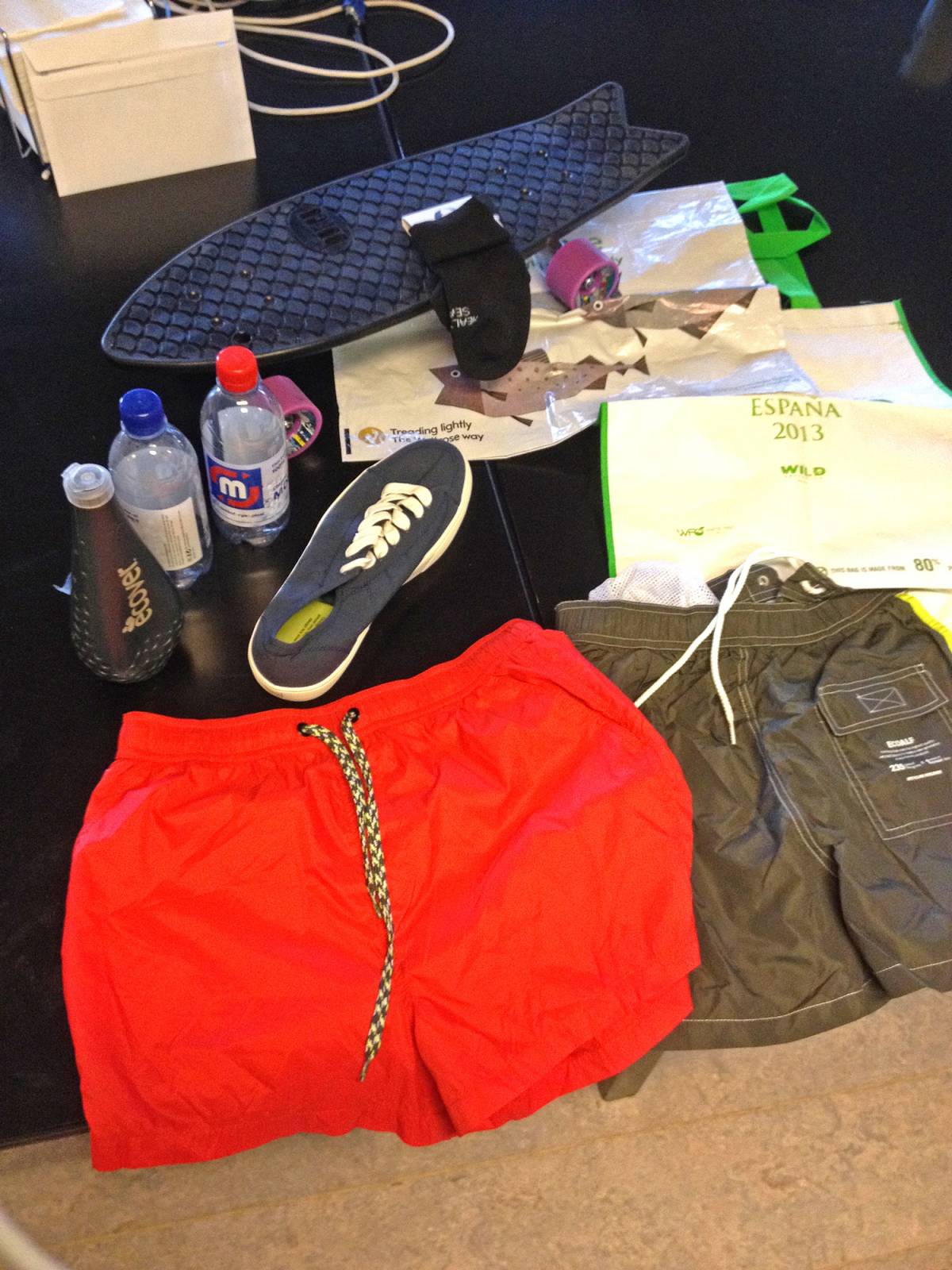 Shoes, skateboards, clothes, bottles and bags are among the products made from recycled plastic. 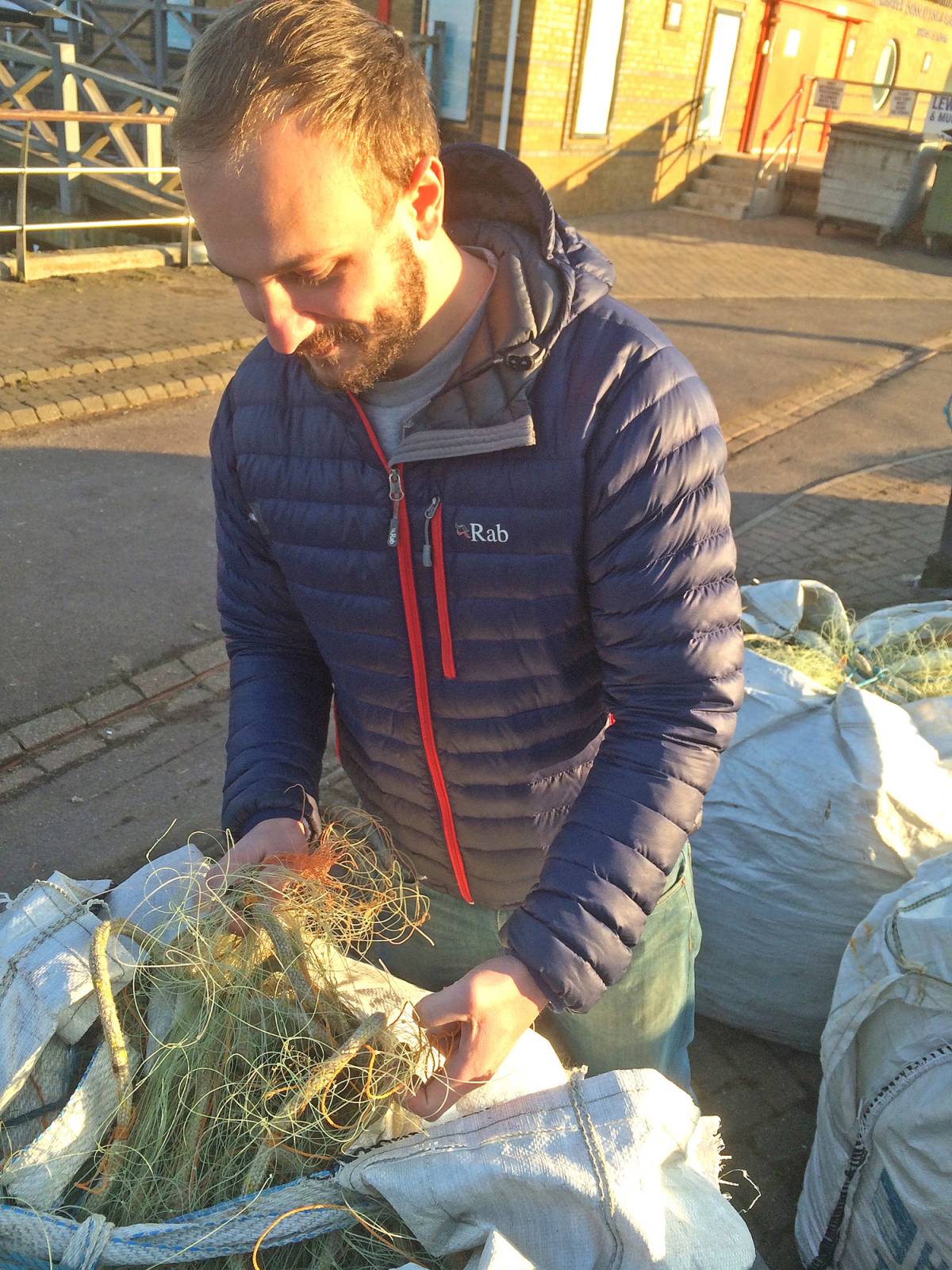 Harry Owen, of MCB Seafood in Newhaven, with some of the collected netting ready for recycling. 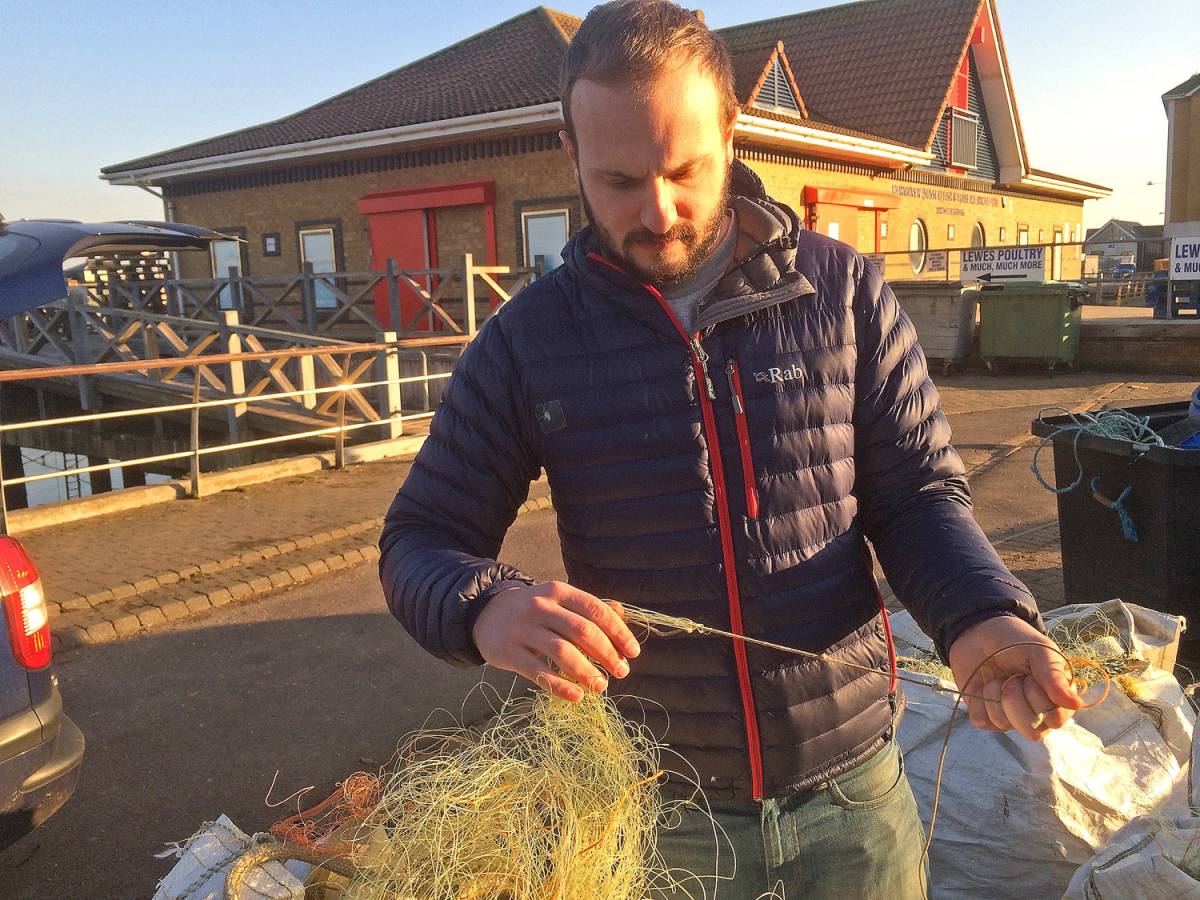 Mono netting is bagged, while heavier trawl netting is kept in a skip for collection.

“Mono netting is bagged, while heavier trawl netting goes into a skip to be collected,” he said.

“Sustainability is becoming increasingly important. The company has been growing, and some larger customers, including some of our long-term clients, have been asking for assurances that we operate responsibly. So the sustainability angle is about keeping existing customers as well as attracting new ones – and it’s also about doing the right things as we move the whole business in that direction,” he said.

Run by Chris and Mike Bish, MCB Seafood has been growing steadily and the fish it buys locally in the south-east comes from along the coast between Ramsgate and Portsmouth, although the majority is from local boats in Newhaven and Eastbourne, almost all from static gear boats, and all under 10m.

“I was looking for a job and spoke to Chris and Mike. They asked me to come and see them, and we talked about ideas to move the company into a more sustainable direction. I started work, and asked what my job title was going to be. They said they didn’t ‘do’ job titles, and I could make up my own, so now I’m the sustainability manager,” Harry Owen explained.

“We discussed ecolabels and the two biggest are MSC and Friend of the Sea; for several reasons, both financial and ideological, we decided to go with Friend of the Sea. Until recently, if you wanted fish that was British and certified as sustainable, there were 11 species to choose from, but now there are 28, because of the additional species that have been certified.”

He commented that it is difficult to quantify just how much this contributes towards the company’s growth.

“We’re doing better than a year ago, and a year ago we were doing better than the previous year, so it’s part of the growth,” he said, adding that MCB Seafood is also now part of the Sustainable Seafood Coalition, an influential body that includes primarily the retail sector and a number of large companies, but which is now increasingly involved with food service companies, including MCB Seafood.

The netting initiative with the Global Ghost Gear Initiative GGGI) grew out of looking into tagging fishing gear, something that, on the whole, is not generally being done. This means that lost gear cannot be traced or returned to its owner if it is found.

“We were at a meeting, looking at this, and we realised that there was a big issue with recycling used fishing gear that needed to be addressed, and we also saw just what a large-scale problem this is. There are hundreds of tonnes of netting every year in Sussex alone, so UK-wide there must be thousands of tonnes that go for landfill. I got in touch with Alex Elliott at GGGI and we explored how we could make better use of this waste netting through recycling,” explained Harry.

“We’re already collecting nets in Newhaven, to be shipped to PlastiX Global in Denmark, and we’re setting up collection points in Shoreham and Eastbourne. Once we have the project working in these three places, we plan to either roll this out elsewhere or wait for people in other ports to come to us,” he said.

Everyone gains from the venture, said Harry. PlastiX Global gets a source of raw material, and the fishermen get to dispose of gear past its usefulness, at zero cost. For MCB Seafood the benefit lies in a combination of positive publicity, the knowledge that it is working responsibly and providing the fishermen who supply them with a much-needed service.

“The fishermen don’t want to see this stuff becoming landfill, and the industry has been demonised, both in the eyes of the public and the press, so it’s worthwhile to be able to do the right thing. The fishermen have been very positive about this. The initial challenge is in spreading the word, for it to filter down to everyone that waste netting can be recycled.” 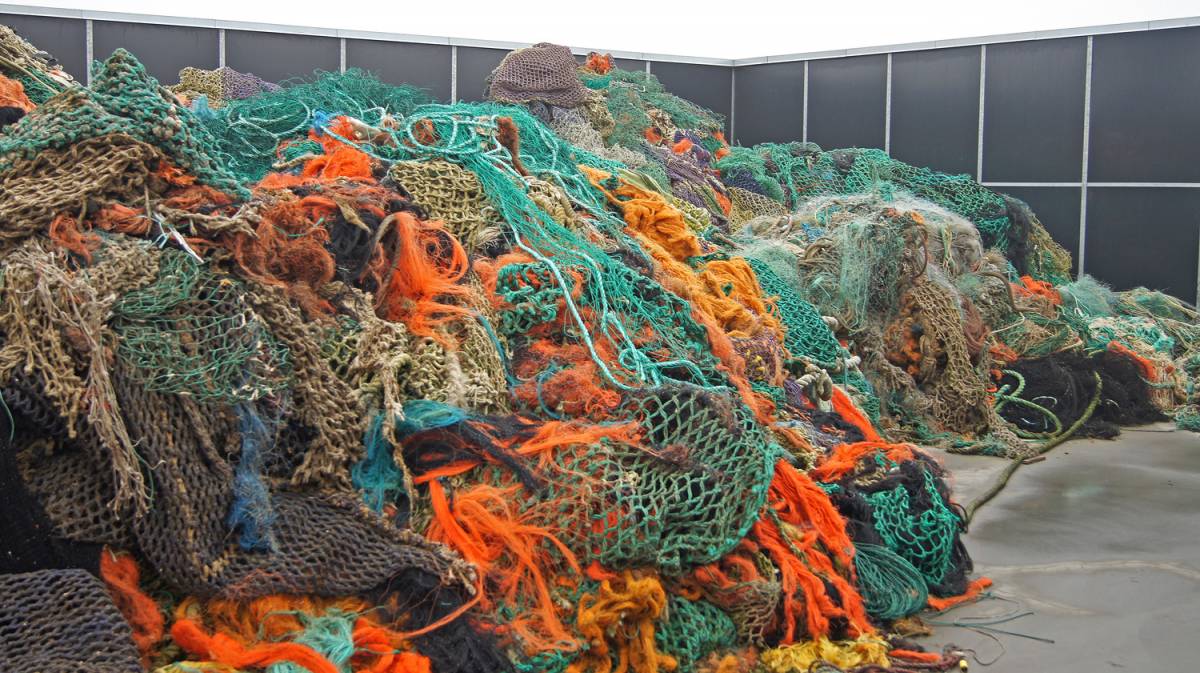 Collected netting waiting to be processed at the PlastiX Global yard at Lemvig in Denmark.

“We’re collecting netting in Denmark and Sweden, and in Scotland as well, although we have only had one collection there so far,” said Jacob Falsig, of PlastiX Global.

“We aim to recycle the plastic completely and at the factory it is sorted, separated into PA, PE and other materials, then shredded and washed, before being processed into pellets that go into plastics manufacturing, even into Lego. It hasn’t been difficult to find buyers for the plastic.”

He explained that recycled plastic is slightly cheaper than the virgin plastic that manufacturers use, plus there is an increasing demand from industry for recycled plastic.

“We are not manufacturers, although we have been approached to go into manufacturing as well. But we prefer to concentrate 100% on handling this waste in the best way we can,” he said, commenting that PlastiX Global can handle any type of plastic, and that, so far, the only fishing gear material that can’t be easily processed is combination rope, as this combines steel with plastic and separating the two is currently prohibitively expensive.

“We have a solution for this but so far it’s not viable. We could burn off the plastic to reclaim the steel content, but that doesn’t do much for the environment so we prefer to stick to what we do well.”

PlastiX Global has been set up to handle exclusively fishing net, specialising in this particular market and having developed its techniques and equipment to handle worn-out fishing gear.

“There are other plastic recyclers, but we are set up for this,” Jacob said, commenting that significant investment has gone into developing processes and systems that can handle fishing gear. “We set out to do this and do it very well, and we wanted to be sure that everything was right.” 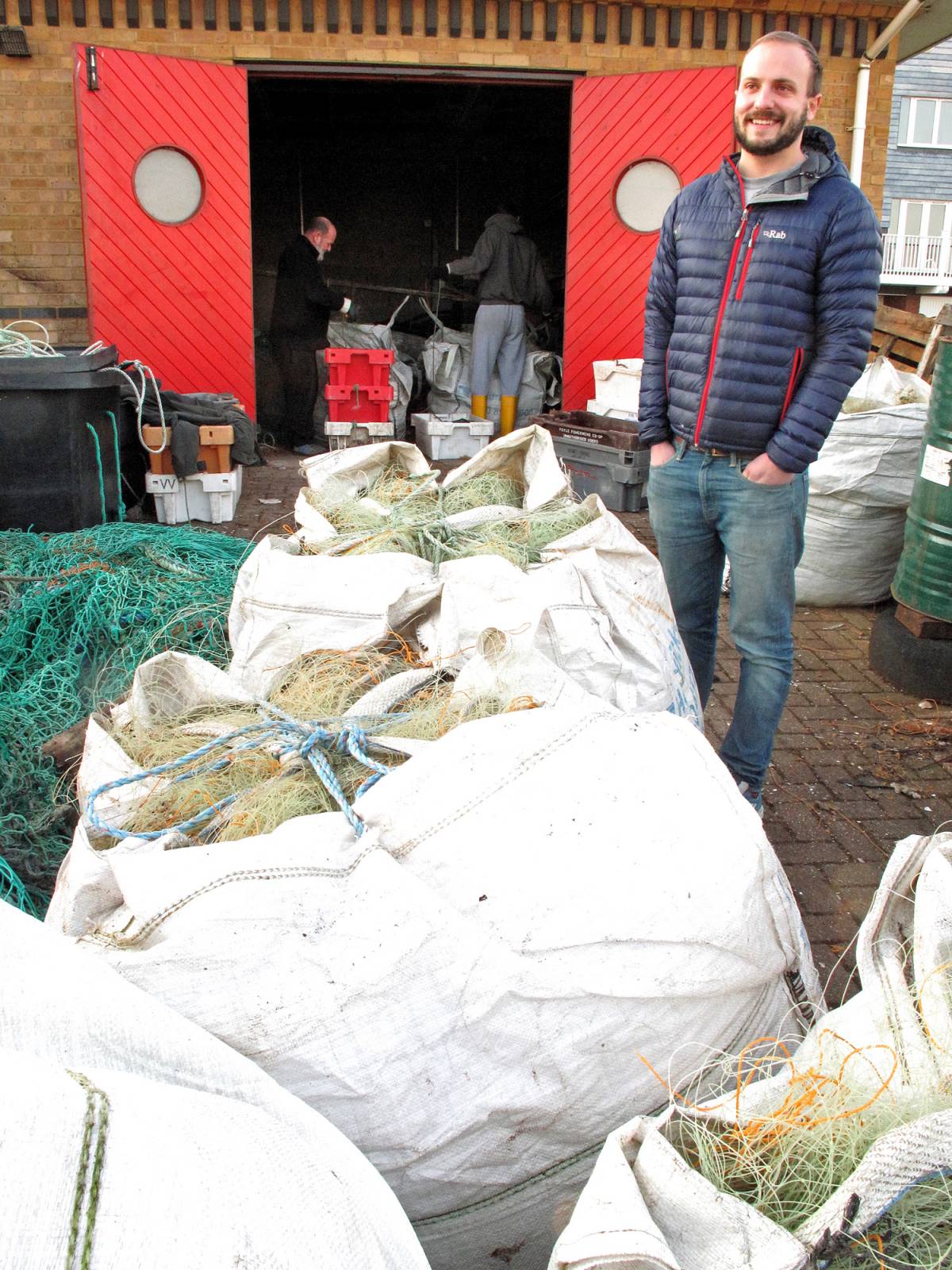 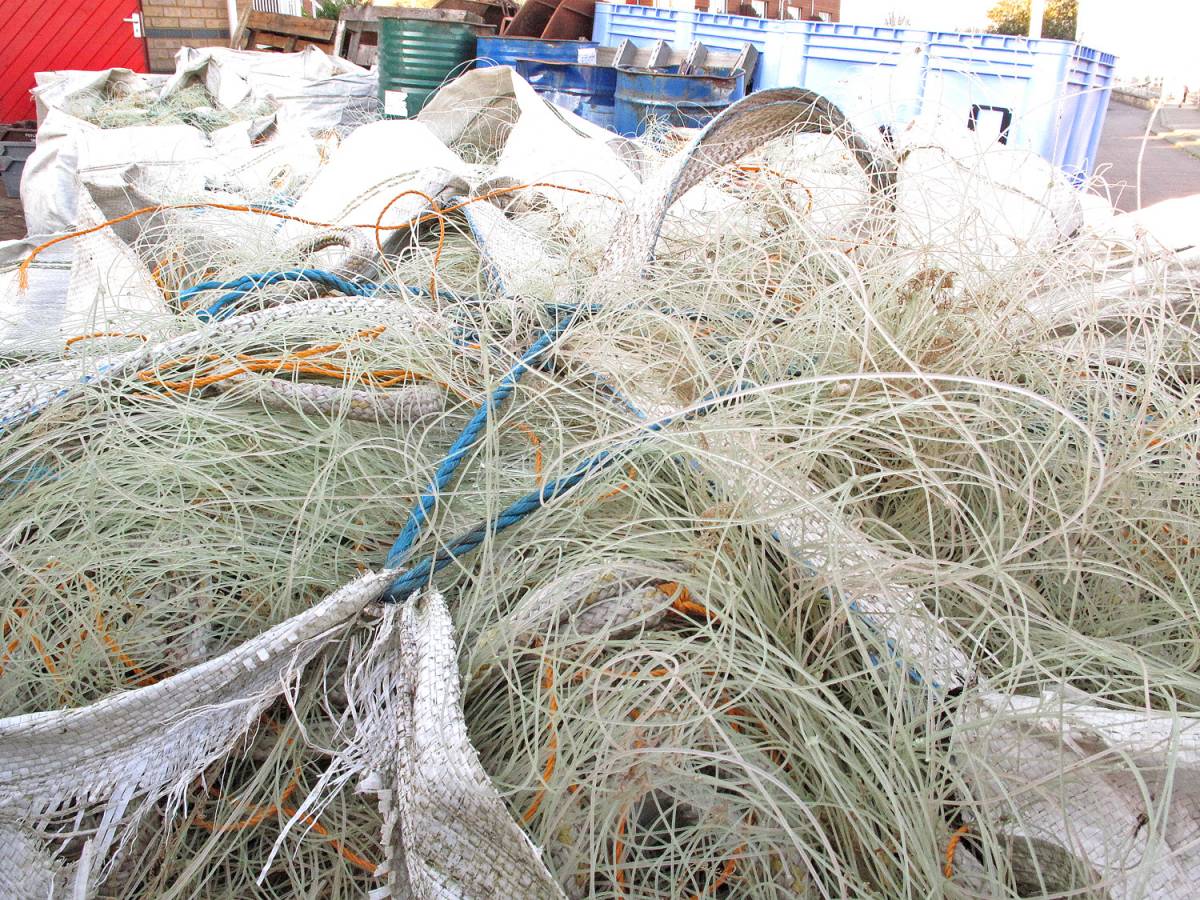 The factory’s capacity has grown from its initial 6,000 tonnes and the last part of the process is the current bottleneck, as this is the extruder that produces the finished pellets. Of the four planned extruders, only two are in place so far, but when the full set is in operation later this year, the factory’s annual capacity is expected to reach 25,000 tonnes. The company also focuses on remaining as CO2-neutral as possible, scheduling collections to use trucks that would otherwise be returning empty.

“I’ve just come back from visiting what must have been the last place in Denmark that was still putting old nets into landfill, so now we have all of the Danish fishermen recycling their nets. The focus of this is that it has to be free for the fishermen; there has to be no incentive for them not to do this, and we see more and more fishermen making savings by not having to pay to dispose of their gear. So this makes financial as well as environmental sense.” 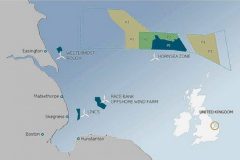 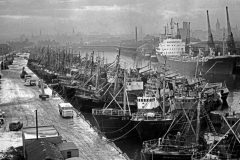 Ports in the Past: Aberdeen Harbour