SPFA and SFA call for ‘action at highest level’

Massive unilateral mackerel quota grabs by Norway and Faroe have been widely condemned throughout the UK and European pelagic fishing sector, including the supply chain, reports Tim Oliver.

Norway last week announced it was unilaterally increasing its share of the North East Atlantic mackerel quota for 2021 from 191,843t to 298,299t – a 55% increase, which Faroe has replicated.

The moves follow the UK’s failure as an independent coastal state to reach fishing agreements with Norway and Faroe for 2021.

They have brought outrage from the UK and European pelagic sector, which denounced it as ‘reckless and irresponsible’ and a threat to the sustainability of the stocks.

There were warnings that the decision will lead to continuing future disputes over mackerel allocations between coastal states, and to catches in excess of the scientific advice.

They demanded action by members of the North Atlantic Pelagic Advocacy Group (NAPA), which is committed to sustainable quota shares.

Ian Gatt, chief executive of the SPFA, said: “Norway is an advocate of zonal attachment, where fishing quota is associated with where the fish actually are.

“But in recent years Norway has been catching less mackerel in its own waters and more in UK waters, as our members can testify from the increased presence of Norwegian vessels.

“On that basis, it should be reducing its quota share, not increasing it.”

Simon Collins, executive officer of the SFA, said: “Faroe catches a bigger proportion of its mackerel in UK waters than in its own (52% to 45% last year). It has also transferred or swapped around a fifth of its mackerel quota for other fish stocks in the past four years, so can have no need for additional fish.

“This is an outrageous move by these countries, and it needs to be addressed urgently by NAPA and by government at the highest level.

“Since its inception, NAPA has confined its actions to writing letters to coastal states. With this escalation by Norway and Faroe, we are way beyond the point of letters having any impact.

“It is now time for NAPA members to come off the fence and take direct action by ending the sourcing of mackerel from these two countries in their retail supply chains.”

The EU pelagic sector, speaking through the European Association of POs (EAPO) and EU fishermen’s organisation Europêche, said it ‘strongly rejects’ the Norwegian decision and is calling on the EU ‘to take immediate action by whatever means to stop it’.

Gerard van Balsfoort, chair of the EU Pelagic Freezer- Trawler Assocation, said that Norway’s move was ‘a new low in our fisheries relations and totally undermines the effective management of our shared and widely distributed pelagic stocks’. “The EU should seriously consider to use its power as the world’s largest import market for seafood to take action to stop such reckless and irresponsible behaviour by Norway,” he said.

He pointed out that everybody knew that the UK leaving the EU would ‘create new uncertainties for all players in the North East Atlantic’ as the UK tried to establish new fisheries relationships with the other coastal states, including Norway.

“It is extremely disappointing that Norway, that markets itself and its seafood products worldwide as the nation with the most prudent and responsible fisheries management system, now has chosen to act in such an irresponsible manner,” said Gerard van Balsfoort.

“It seems that Norway has left the path of constructive collaboration with other coastal states. The first signal of this was given already around Christmas last year, when Norway unilaterally decided to unlawfully grab part of the Svalbard cod quota allocated to the EU for its own benefit.”

Since 2014, the EU, Norway and Faroe have agreed on a joint sharing and management arrangement, but Iceland, Russia and Greenland have never been part of this. Failure to reach agreement between the coastal states on quota shares led to the suspension in 2019 of the MSC certification for the mackerel fishery in all the countries involved.

The Norwegian fisheries minister said that Norway had set the quota in the absence of a coastal states agreement on the mackerel allocation following the UK’s departure from the EU. Norway justifies the huge increase by saying there had been a marked movement of mackerel in recent years into Norwegian waters.

Norwegian fisheries minister Odd Emil Ingebrigtsen said he regretted that it had not been possible to secure a coastal state agreement for 2021, which had been ‘very important in securing responsible management of the stock, as well as providing stability and predictability for all parties involved’.

He said Norway would continue to work for an agreement that encompasses all coastal states. Negotiations about the management of the mackerel stock from 2022 and onwards were planned to resume during the autumn.

The Norwegian fisheries ministry said the Norwegian quota for 2021 constitutes 35% of the agreed mackerel TAC. This is based on assessments of how much of the mackerel is located in waters under Norwegian jurisdiction during the year.

“There have been substantial changes in the migration pattern and spatial distribution of the North East Atlantic mackerel during the last years towards a more northeastern distribution. The occurrence of mackerel in Norwegian waters has increased substantially compared to 2014 when the mackerel agreement was established,” said the Norwegian ministry. 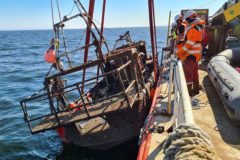 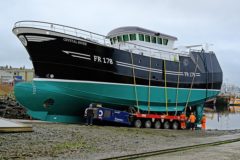